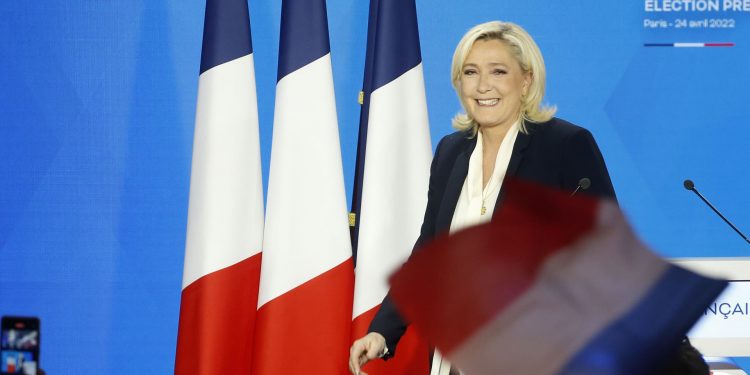 Addressing her supporters in Paris Sunday night, Le Pen conceded defeat but said: “We have nevertheless been victorious.”

French President Emmanuel Macron may have just won a second term in office, but political analysts believe the continued rise of the far-right will cause him significant headaches over the coming years.

“The actual closeness, relative closeness of the vote and the fact that [Marine] Le Pen got over 40%, I think that’s a damning indictment on the state of French politics and perhaps actually the state of inequality and living standards across Europe,” Julian Howard, head of multi-asset solutions at asset management firm GAM, told CNBC’s “Squawk Box Europe” Monday.

Centrist Macron obtained 58.54% of the votes on Sunday, whereas his nationalist and far-right rival Le Pen got 41.46%. Back in 2017, when the two politicians also disputed the second round of the French presidential vote, Macron won with 66.1% versus Le Pen’s 33.9%.

Addressing her supporters in Paris Sunday night, Le Pen conceded defeat but said: “We have nevertheless been victorious.”

“The ideas we represent are reaching a peak,” she added, while mentioning that in upcoming legislative elections in June, her party — National Rally — will be a “true opposition” to Macron and France’s political establishment.

In France, the president is the highest figure of the state, but the upcoming parliamentary elections for the National Assembly will show whether Macron will be able to easily pass new laws or face tough roadblocks to get his pro-business and pro-EU agenda through.

One of the challenges for his second term, as stated by Macron on Sunday, is unifying France.

Le Pen’s results “including a majority of working class voters and victories in many rural and suburban districts, illustrates the profound divisions in French society which will make Macron’s second term as troubled as the first,” Mujtaba Rahman, managing director at consultancy Eurasia Group, said in a note Sunday.

Le Pen’s performance in the 2022 election benefited from a change in tone from the far-right leader. Political analysts have noted how she became more moderate this time around, avoiding a focus on immigration or rallying against European integration. Instead, Le Pen chose to talk about soaring inflation and the weaker purchasing power of French citizens.

“We should not dismiss the increase in her vote share; it shows that her efforts to normalize her party and her policies are working,” Jessica Hinds, an economist at Capital Economics, told CNBC via email Monday.

Having taken the reins of the party from her father in 2011, then called National Front, she ran for top office in 2012, 2017 and now 2022. She reached the second and final round of the French presidential vote both in 2017 and this year.

Her father, Jean-Marie Le Pen, shocked many when he made it to the second round of France’s presidential election in 2002; but was defeated by incumbent Jacques Chirac in a landslide vote. Jean-Marie Le Pen received 17.8% of the votes that year.

“Le Pen will have difficulty, nonetheless, in surviving the next five years as the principle standard-bearer of the French far right. She and her party, National Rally, will now face a renewed challenge from Eric Zemmour and her own niece, Marion Maréchal,” Rahman said in the same note.

Eric Zemmour, also an anti-immigration and far-right politician, was one of the many new names in the French political scene in the runup to this year’s election. His performance in the first round of the 2022 vote was weaker than pollsters had initially estimated, with some analysts pointing to his more aggressive stance — notably toward Ukrainian refugees — as one of the reasons.

Marion Maréchal, Le Pen’s niece, spoke out in support of Zemmour during this campaign.

“With regards to [the next presidential election in] 2027, the rules say that Macron won’t be able to run again and Le Pen may not either, though she has refused to rule out a fourth attempt,” Hinds said.

“So there is a lot that could be different about the next election, five years is a long time,” she added.