Macron, not candidate but already campaigning for reelection 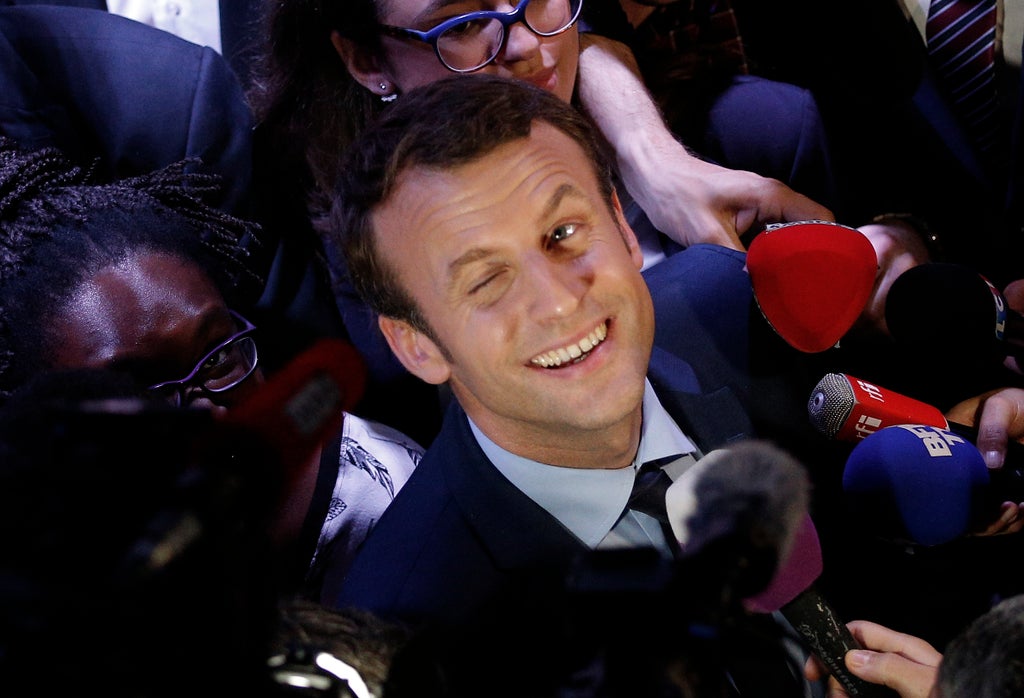 He has a full campaign team that’s fanning out around France meeting with voters. He makes speeches about his plans for the country in the upcoming years. The problem? Emmanuel Macron hasn’t officially declared that he’s a candidate for April’s presidential election yet.

Critics say he’s unfairly using his taxpayer-funded presidential pulpit to campaign for a second term while dragging out his widely expected announcement as long as possible.

Less than two months before April 10’s first round, Macron’s intention is no mystery. He said last month that he has “the desire” to run for a second term, but he wanted to wait for the COVID-19 situation to improve before making a decision. The deadline to formally declare candidacy is March 4.

Far-right presidential contender Eric Zemmour accused Macron of trying to use the pandemic argument to make French voters forget about what he considers France’s decline.

“Is Emmanuel Macron using the health crisis to start campaigning? The answer is yes,” Marine Le Pen the other far-right candidate, charged. Like the U.S. and most European countries, France recently started easing most virus restrictions as the spread of the virus is slowing down.

Macron also explained he wanted to focus on the Ukraine-Russia crisis first. On the flight between Moscow and Kyiv last week, he told reporters that he will “think about” declaring his candidacy later. “Everything comes in due time,” he said.

Yet his recent trips across French regions tend to increasingly look like campaign events.

A visit this month to northern France, during which he announced an additional 100 million euros to boost the economy in a former mining area, was followed by dozens of journalists from national and international media, eager to see whether he would adopt a campaigning tone.

A meeting with local officials included a key political rival from The Republicans party, Xavier Bertrand, who is actively campaigning with conservative candidate Valérie Pécresse.

So close to the election, “that visit is a candidate’s visit, with lies and untruths. The hypocrisy must stop. An electoral trip cannot be paid for by the Republic,” Bertrand said after listening to Macron’s plans for the region.

The head of The Republicans’ party, Christian Jacob, denounced “misuse of public money” and said he reported the issue to the National Commission on Elections Financing.

France has strict rules about financing a presidential campaign. The amount of money a presidential contender is allowed to spend for the first round is 16.8 million euros ($19.1 million), with an additional 5.6 million euros ($6.4 million) for those who qualify for the run-off. After the election, the French state reimburses candidates who won at least 5% of the votes half of their campaign costs.

In 2012, conservative former President Nicolas Sarkozy announced his bid for a second term — which he lost to Socialist Francois Hollande — just over two months before the election. The National Commission on Election Financing later ruled that some expenses he incurred months before to organize a rally in southern France were to be included in campaign counts, even though he had not formalized his candidacy at that time.

Sarkozy was last year sentenced to a year of house arrest for illegal campaign financing. He appealed the ruling.

Macron’s party has already launched a so-called “campaign of the presidential majority” that is being deployed across the country via posters and leaflets promoting a website called “With You.” The website doesn’t mention Macron’s name but invites internet users to subscribe to a newsletter to follow “campaign news.”

The Constitutional Council recently announced that Macron was the first to receive the 500 signatures from elected officials that are required under French law to allow someone to run in the presidential election. The rule is meant to limit the number of candidates.

Since Jan. 1, French television and radio broadcasters are also required by law to provide “fair” exposure to all candidates and would-be candidates — based on their estimated weight in the campaign. The rule includes Macron himself, yet its implementation is complex because all comments considered part of the political debate are to be counted but those attributed to the role of president are not.

The difference can sometimes seem subtle. On Thursday, Macron went to the eastern town of Belfort to announce the construction of six new nuclear reactors. It is up to the president to decide France’s energy strategy.

In his speech, he also harshly criticized “those who say we don’t need nuclear (energy),” in a reference to the Greens and far-left candidates’ campaign platforms.

“Can you imagine France in 30 years time with 40,000 windmills instead of 8,000 now?,” he asked. “That’s what supporters of phasing out nuclear power are proposing today to the French. It’s not serious.”

Rivals also said Macron, a pro-European, is using France’s six-month presidency of the European Union as a springboard toward reelection.