Madeleine Albright, First Woman to Serve as Secretary of State, Dies at 84 – The New York Times 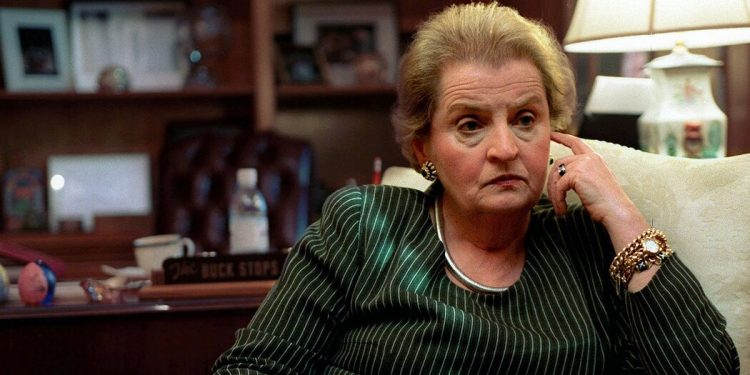 “As secretary, I will do my best to talk about foreign policy not in abstract terms, but in human terms and bipartisan terms,” she said. “I consider this vital because in our democracy, we cannot pursue policies abroad that are not understood and supported here at home.”

She then embarked on a nine-nation world tour, with stops in Rome, Paris, London, Brussels, Bonn, Moscow, Tokyo, Seoul and Beijing. It was a getting-to-know-you circumnavigation that showed off her grasp of issues, her language skills and her centrality as Mr. Clinton’s chief foreign policy maker and spokeswoman. She generated excitement everywhere, and appeared to have a wonderful time.

“Everybody has their own style, and mine is people to people,” she said on a walk in Rome. “I’m trying mine, and I am enjoying it.”

A Test in Iraq

As Mr. Clinton’s top diplomat during relatively peaceful years, Ms. Albright dealt with regional conflicts in Bosnia and Herzegovina, Kosovo, Haiti, Northern Ireland and the Middle East, but no wide wars. She promoted the expansion of NATO into the former Soviet bloc nations of Eastern Europe and defended continued economic sanctions against Iraq.

A crisis on Ms. Albright’s watch developed in late 1997 and early 1998, after Iraq’s president, Saddam Hussein, blocked the access of United Nations inspectors to sites where Iraqi chemical and biological weapons of mass destruction were believed to have been hidden, in violation of a Security Council resolution passed at the end of the 1991 Persian Gulf war.

After months of warnings and an American military buildup in the region, Ms. Albright and Mr. Clinton threatened to launch devastating aerial attacks on Iraq unless the sites were reopened to inspection. “Iraq has a simple choice,” Ms. Albright said in a public warning to Hussein. “Reverse course or face the consequences.”