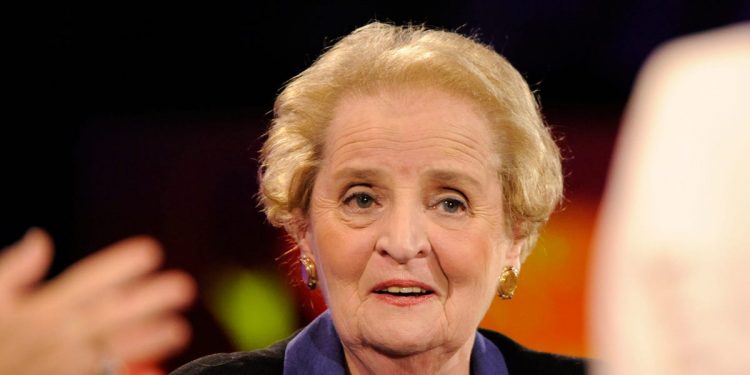 
Former Secretary of State Madeleine Albright, the granddaughter of Holocaust survivors who fled Czechoslovakia as a child before later becoming America’s top diplomat, has died. She was 84.

Albright’s family said in a statement that the cause of death was cancer.

“She was surrounded by family and friends. We have lost a loving mother, grandmother, sister, aunt, and friend,” her family said in the statement.

As the first female Secretary of State, Albright became the most powerful woman in American history in 1997. It would take another decade for Nancy Pelosi to secure the speaker’s gavel and another 15 years before Vice President Kamala Harris’ election. Unlike Pelosi and Harris, Albright was not in the presidential line of succession.

Former President Bill Clinton said that Albright “was one of the finest Secretaries of State, an outstanding UN ambassador, a brilliant professor, and an extraordinary human being.”

“Few leaders have been so perfectly suited for the times in which they served,” Clinton said in a statement. “Because she knew firsthand that America’s policy decisions had the power to make a difference in people’s lives around the world, she saw her jobs as both as an obligation and an opportunity.”

President Barack Obama, who presented Albright the Presidential Medal of Freedom in 2012, said at the time that Albright’s “courage and toughness … paved the way for progress in some of the most unstable corners of the world.”

Obama also recalled a fitting anecdote about Albright’s life in which she greeted an Ethiopian man at a naturalization ceremony.

Former President George W. Bush said in a statement that Albright “lived out the American dream.”

“She served with distinction as a foreign-born foreign minister who understood firsthand the importance of free societies for peace in our world,” Bush said.

A long-time fixture in Democratic politics, Albright received her first major job working for her former professor, Zbigniew Brzezinski, who became the national security advisor after Jimmy Carter won the 1976 presidential election, according to The New York Times. She would later serve as a foreign policy advisor to three top Democrats, including Arkansas Gov. Bill Clinton when he won the White House in 1992. Before leading the State Department, Albright also served as US Ambassador to the United Nations.

As secretary of state, Albright pushed for NATO’s eastward expansion into former Soviet Union-bloc nations. In a gathering at the Truman Presidential Library with the leaders of Poland, Hungary, and the Czech Republic, Albright offered an effusive “Hallelujah” at the formal admission of the nations affirmed they were “irrevocably within the Atlantic community for freedom.”

“History will record March 12, 1999, as the day the people of Hungary, the Czech Republic and Poland strode through NATO’s open door and assumed their rightful place in NATO’s councils,” she said during the event.

NATO’s expansion has received renewed attention during Russia’s war in Ukraine. Russian President Vladimir Putin has blamed the alliance’s expansion for the contentious dynamic between Moscow and the West.

Albright first came to the US from Prague as a refugee in 1948 and graduated from Wellesley College in Massachusetts in 1959. She did not learn until later in her life that her family had covered its roots. She was raised as a Catholic before finding out that three of her grandparents were murdered in the Holocaust.

This story is developing. Please check back for updates.

Can SsangYong be saved by EVs?