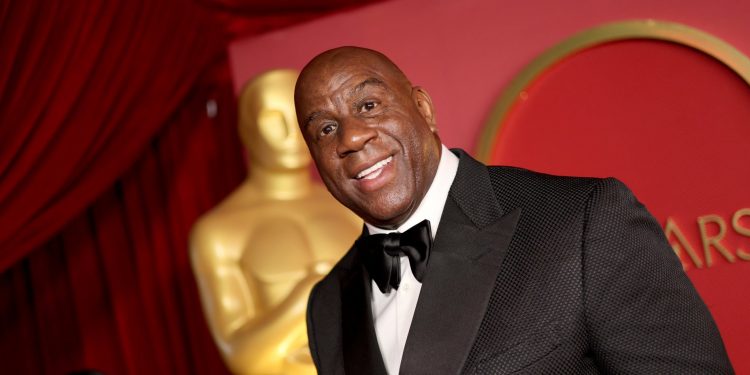 
Winning Time episode 6 focuses on Magic Johnson’s prospective shoe deals with Nike and Converse – the player ultimately chose Converse, a decision he says he regrets to this day.

We’re more than halfway through Winning Time: The Rise Of The Lakers Dynasty as the series continued with episode 6, entitled Memento Mori.

Fans of Magic Johnson – real name Earvin Johnson Jr – will know the former NBA star has become a hugely successful businessman through wise investments and his business Magic Johnson Enterprises, which has holdings worth $1 billion, as per its website.

However, episode 6 proves the 62-year-old hasn’t always got the big calls right – he’s still kicking himself about one particular decision he made in the 1980s.

The athlete was selected first overall in the 1979 NBA draft by the LA Lakers and won the 1980 NBA finals, making him the only rookie to win the NBA Finals MVP award.

With such a huge career opening up ahead of him, endorsement deals were expected to roll in. Sports manufacturers Puma, Converse and Adidas all wanted Magic on board, as did an up-and-coming footwear company called Nike.

At the time, Nike was focusing on athletics and already had a number of famous marathon runners on its books. But, such is the popularity of basketball, none were as prominent as Magic Johnson, rookie or not.

As they were a smaller company than Converse and Puma at the time, Winning Time claims Nike founder Phil Knight could only offer Magic $1 for every pair of shoes sold and 100,000 shares in stock options starting at $0.18.

Unfamiliar with stocks, the then-19-year-old opted for Converse, which offered him $100,000 per year. NBA legend Dr J had signed with Converse in 1975, another incentive for the young star.

Johnson has spoken about the deal many times over the years, telling Ellen DeGeneres in 2017 he gets mad every time he’s in a Nike store.

He admitted: “I didn’t know anything about stocks at that time – boy, did I make a mistake. I’m still kicking myself. I could be making money off of everyone buying Nikes right now!”

The exact amount of stock Johnson was offered hasn’t been confirmed but Winning Time estimates 100,000 stock options would have scored Magic an eye-watering $5.2 billion – he could have been the name on the coveted Jordan sneakers.

Johnson’s 12-year deal with Converse made him about $2 million a year, the LA Times reports.

In other news, What is a Grand Slam in F1 as Charles Leclerc sets career first in Australia?