Magic Johnson tears into Lakers after 37-point loss to Nuggets 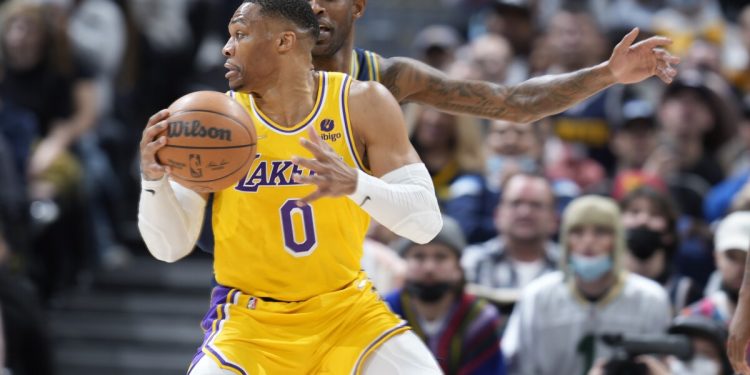 Lakers coach Frank Vogel, desperate to grab onto something, has seen moments this year that he hoped could be a turning point.

The gutted-out win in Detroit, overtime in Indiana, dominance against Boston in Los Angeles, small-ball successes without Anthony Davis — all of them moments where the Lakers could plant their foot in the ground and start moving in another direction.

Sunday felt different. Now this — a 37-point loss that somehow looked worse than that deficit implies — this could be a moment.

Coming off their worst loss of the season, called out by a franchise legend and challenged by one leader, the Lakers reached a crisis point — a moment when it was fair not to wonder if things were about to get better but if they could possibly get any worse.

“We got to make a decision. We just got to play hard. Sometimes the schemes and how you play doesn’t really matter. You got to just play hard sometimes,” Russell Westbrook said after the Lakers lost 133-96. “Teams are playing harder than us, simple as that.”

Saturday in Denver, the Lakers hit rock bottom on their season in a 133-96 loss to Denver, a reminder of how far the Lakers need to go to even be mentioned as a contender for anything other than a rebuild.

And Westbrook’s repeated insistence that the Lakers weren’t playing hard enough, that was the biggest indictment.

Dwight Howard, who got the start to try to slow Nikola Jokic (and the Lakers, 100%, didn’t slow Jokic), said the same thing — the normally upbeat big man sullenly conceding that he plays for a team with an effort problem.

“He was right,” Howard said of Westbrook’s diagnosis. “We just got to continue to do a better job with that. It’s not too much I can really say about it. We’ve been saying it all year. So, I shouldn’t have to keep saying. But, you know, he’s right.”

Magic Johnson expressed the same sentiment on Twitter, though Westbrook and Howard both bristled at the comments coming from an outsider.

“Lakers fans can accept being outplayed but we deserve more than a lack of effort and no sense of urgency,” Johnson wrote. “Owner Jeanie Buss, you deserve better.”

LeBron James, who undoubtedly would’ve been asked about Johnson’s assessment along with Westbrook and Howard’s conclusion that the Lakers aren’t playing hard enough, left the arena without speaking to reporters.

It was a rare misstep for James, normally the most reliable presence postgame, leaving an opening for people to speculate whether his confidence in this team was shaken after its defense reached new lows.

On the court, it was clear that James was frustrated at a minimum with so many defensive possessions ending with an open Denver player and the ball easily passing through the basket. He wasn’t alone, the Lakers regressing, looking like a team that had just met instead of one more than halfway through the season.

“I think when you’re getting your tails kicked, sometimes you’re going to see bad body language. I don’t think that’s ever not the case,” Vogel said. “But we got to be better in terms of pushing through.”

The Lakers largely seem in agreement as to what happened in their worst game of the season — effort and execution failures pushing up against hot shot-making and growing confidence.

And even if they disagreed with the methods of Johnson’s criticism, Westbrook and Howard essentially agreed with the sentiment — at least when it comes to effort.

But the reasons why — they’re thornier.

Westbrook shot down the notion that the Lakers were too enamored of their past achievements, that their worthy reputations had clouded the reality that the team would need to execute and grind more than it expected.

When asked a similar question, though, Howard introduced another problematic word alongside “effort” — “desire.”

“How bad do we want to win every night and how consistent are we going to be? And we haven’t been really consistent all year with that,” Howard said.

And why the Lakers have griped about how misfortune has limited their time together, about how injuries and illness have disrupted their continuity, their role in creating these situations cannot be ignored.

As far as continuity, they blew that apart in the offseason when they almost completely rebuilt their team. And as far as injuries, they had to expect some of that considering the age and histories of the key players they turned to.

And unlike the 2019-20 season, when the Lakers eagerly attacked the regular season with purpose and intent, this Lakers team intentionally approached this season with restraint.

In the preseason, the Lakers held Westbrook and James out of games in order to protect them from injury at the expense of beginning the cohesion process with Davis. It was a logical choice after the Lakers saw last season derailed by key injuries — and it still might end up being the right one if the team can enter the playoffs healthy — but it makes some of the moaning about a lack of time together ring hollow.

Even if the Lakers played hard and played together, their problems would still be easy to spot. Against younger, hungrier and more athletic Denver bench lineups, the Lakers looked cemented to the court, their age this far above sea level easier than ever to spot.

And ill-advised shot attempts like early in the shot clock threes from Westbrook and Howard were deflating for a team that should be learning how slim its margins for error actually are.

If they grasp it, an understanding that the Lakers aren’t favorites for anything other than disappointment at this point in time, maybe Saturday’s loss in Denver can be that turning point Vogel has been so obviously looking for.

If not, losses like this one will tell the story of this season — a turning point when hope and foolishness became inseparable.