Maidstone has already tested 55% of the 10,000 resident target in frantic door-to-door blitz 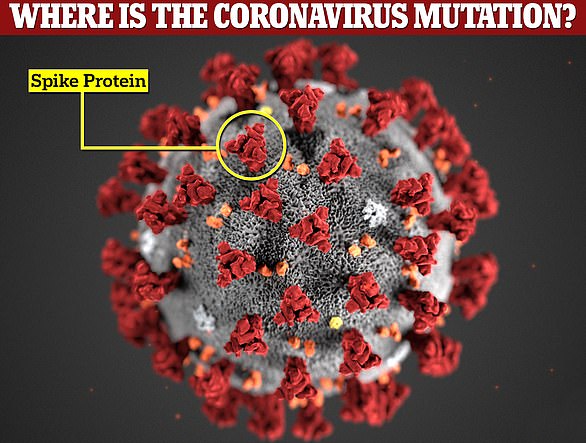 The variant has mutations on its spike protein which scientists fear will make it difficult for the immune system to recognise, even in vaccinated people

When and where was it discovered?

Scientists first noticed in December 2020 that the variant, named B.1.351, was genetically different in a way that could change how it acts.

It was picked up through random genetic sampling of swabs submitted by people testing positive for the virus, and was first found in Nelson Mandela Bay, around Port Elizabeth.

Using a computer to analyse the genetic code of the virus – which is viewed as a sequence of letters that correspond to thousands of molecules called nucleotides – can help experts to see where the code has changed and how this affects the virus.

What mutations did scientists find?

There are two key mutations on the South African variant that appear to give it an advantage over older versions of the virus – these are called N501Y and E484K.

Both are on the spike protein of the virus, which is a part of its outer shell that it uses to stick to cells inside the body, and which the immune system uses as a target.

They appear to make the virus spread faster and may give it the ability to slip past immune cells that have been made in response to a previous infection or a vaccine.

N501Y changes the spike in a way which makes it better at binding to cells inside the body.

This means the viruses have a higher success rate when trying to enter cells when they get inside the body, meaning that it is more infectious and faster to spread.

This corresponds to a rise in the R rate of the virus, meaning each infected person passes it on to more others.

N501Y is also found in the Kent variant found in England, and the two Brazilian variants of concern – P.1. and P.2.

The E484K mutation found on the South African variant is more concerning because it tampers with the way immune cells latch onto the virus and destroy it.

Antibodies – substances made by the immune system – appear to be less able to recognise and attack viruses with the E484K mutation if they were made in response to a version of the virus that didn’t have the mutation.

Antibodies are extremely specific and can be outwitted by a virus that changes radically, even if it is essentially the same virus.

Vaccine makers, however, have tried to reassure the public that their vaccines will still work well and will only be made slightly less effective by the variant.

How many people in the UK have been infected with the variant?

At least 105 Brits have been infected with this variant, according to Public Health England’s random sampling.

The number is likely to be far higher, however, because PHE has only picked up these cases by randomly scanning the genetics of around one in 10 of all positive Covid tests in the UK.

This suggests that there have been at least 1,050 cases between December and January 27.

Where else has it been found?

According to the PANGO Lineages website, the variant has been officially recorded in 31 other countries worldwide.

The UK has had the second highest number of cases after South Africa itself.

Will vaccines still work against the variant?

So far, Pfizer and Modern’s jabs appear only slightly less effective against the South African variant.

Researchers took blood samples from vaccinated patients and exposed them to an engineered virus with the worrying E484K mutation found on the South African variant.

They found there was a noticeable reduction in the production of antibodies, which are virus-fighting proteins made in the blood after vaccination or natural infection.

But it still made enough to hit the threshold required to kill the virus and to prevent serious illness, they believe.

There are still concerns about how effective a single dose of vaccine will be against the strain. So far Pfizer and Moderna’s studies have only looked at how people given two doses react to the South African variant.

Studies into how well Oxford University/AstraZeneca‘s jab will work against the South African strain are still ongoing.

Johnson & Johnson actually trialled its jab in South Africa while the variant was circulating and confirmed that it blocked 57 per cent of coronavirus infections in South Africa, which meets the World Health Organization’s 50 per cent efficacy threshold.

Why inflation poses no risk to our economic recovery