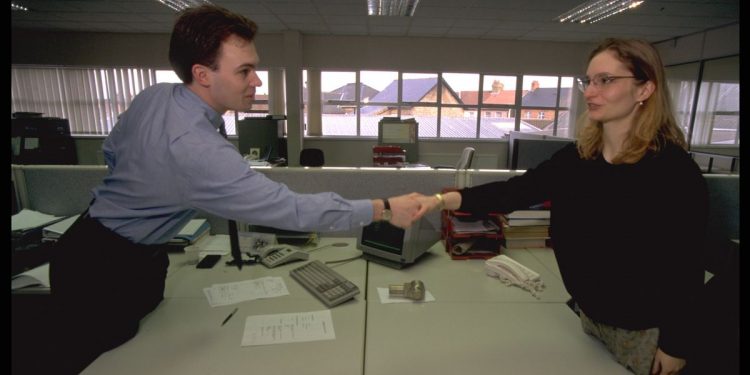 
Four in five adults believe it really IS who you know, not what you know in life, that helps us get ahead in the work environment.

A study of 2,000 Brits discovered 80 percent believe that no matter how hard they work, those with better business contacts will always succeed.

As well as getting a job (68 percent), people think others typically use those they know to help get a promotion (58 percent), a space on a guestlist (54 percent), and work experience (50 percent).

Despite this, 84 percent prefer to know they’ve earnt something for who they are, rather than who they know.

Of the fifth who have secured a job via someone they know, 26 percent felt guilty about the other people who applied for the role, and 29 percent believe they had to work harder to prove themselves.

The research was commissioned by Virgin Media O2 to mark National Apprenticeship Week, with the company creating more than 200 apprenticeship roles this year, which focus on people’s potential, skills and strengths – rather than who they know or if they have experience.

It also found seven in ten adults believe they should be judged purely on who they are, rather than who or what they know.

While 71 percent of 18- to-24-year-olds feel it’s unfair when people aren’t given a chance at a job because they don’t know someone in the company.

And over three-quarters (78 percent) think people should be judged on their potential, rather than experience or qualification.

Fears of not being good enough, a lack of interview experience, and not having high grades are among the things putting people off applying for a job, apprenticeship, or work experience.

Karen Handley, head of future careers at Virgin Media O2, said: “We know how difficult it can be for people – especially youngsters starting out – to get a foot on the career ladder.

“That’s why it’s a real shame the research shows that many people believe “it’s who you know” that counts when applying for a job.

“And it’s disappointing that people are missing out on applying for an apprenticeship because they’re worried they’re not good enough or don’t have the right experience.

“That’s why, for Virgin Media O2’s apprenticeships, we don’t care “who you know”, or ask for CVs or prior experience. Instead, we care about who you are and your potential.”

The study also found a fifth think interviewers focus too much on their grades or experiences, rather than their potential or strengths.

And 71 percent of those polled, via OnePoll, said it’s unfair when entry level jobs ask for experience.

More than a quarter wish employers didn’t judge them by their CV, while 28 percent believe it’s tricky to express their potential this way.

And one in six admitted to having lied on their CV as they thought it would help them get the job they applied for, or to make themselves sound more interesting.

To support those applying for their first ever job, Brits think potential employers should explain each stage of the application process (45 percent), avoid asking for prior knowledge or experience (30 percent), and not ask for CVs at all (17 percent).

But four in ten don’t think employers ask enough to find out about them as a person – with people keen to talk about their life experience (58 percent), hobbies and interests (37 percent) and personality (35 percent) during an interview.

Karen added: “We’re creating apprenticeship roles this year that will support us in our aim of upgrading the UK with the first-class connectivity and the skills the country and our customers will need now and in the future.

“Virgin Media O2 is a great place to work, and we’re creating a culture where everyone has the opportunity to thrive.”

Super-gonorrhoea is back: Health chiefs spot another three cases of antibiotic-resistant STI

Super-gonorrhoea is back: Health chiefs spot another three cases of antibiotic-resistant STI