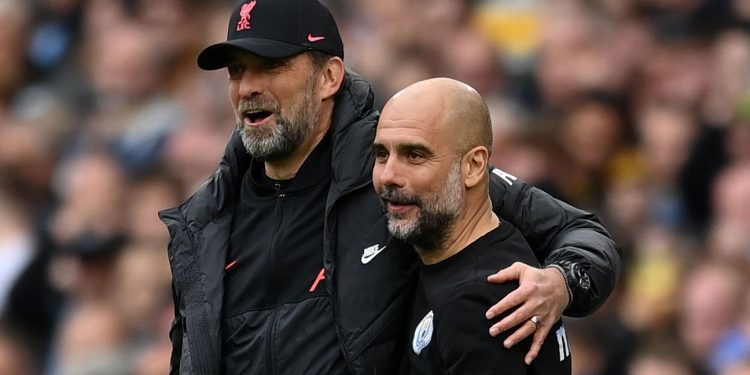 
MANCHESTER, England — It was epic, frenetic and unpredictable until the end, when Riyad Mahrez had a chance not only to win the game, but almost certainly the Premier League title. Instead, the Manchester City substitute sent the ball high over the Liverpool crossbar and the 2-2 result means we are no nearer knowing which of England’s best two teams will be crowned champions.

What was certain, though, was that this had been a game with everything, including the intervention of VAR to correctly rule out Raheem Sterling’s 63rd-minute goal for offside. By that stage, Liverpool had twice cancelled out a City lead to level the scores: Kevin De Bruyne and Gabriel Jesus netted for the hosts, with Diogo Jota and Mane getting the away side back on terms.

The upshot of 90 end-to-end minutes is that, with both having seven league games to play — there is also the not insignificant matter of next Saturday’s FA Cup semifinal head-to-head at Wembley (Stream live: 10:30 a.m. ET, ESPN+) — just one point separates the clubs that have dominated the Premier League for the past five years.

“It was like a boxing fight,” Liverpool manager Jurgen Klopp said. “You have your arms down for a second and get a massive knock and you shake a little. It was a great game and a result which we have to live with and can live with.”

City retain the advantage and their remaining fixtures suggest that Liverpool need a surprise result to go in their favour to claim top spot. Aside from visits to Wolves and West Ham, there is little to worry Pep Guardiola’s players between now and their season finale at home to Aston Villa, who are managed by Liverpool legend Steven Gerrard.

Liverpool have a tougher run-in. They should make easy work of troubled rivals Manchester United and Everton at Anfield, but those fixtures are always charged with emotion and unpredictability; a home game against Tottenham on May 7 may also be hazardous, while Klopp’s men must also face Gerrard’s Villa.

As both sides showed in this game, their top level is at a different stratosphere to every other team in the division, so City’s success in avoiding defeat and keeping hold of top spot could ensure that this turns out to be the decisive day in the title race.

But although both teams displayed their incredible quality, there were also rare glimpses of nerves and mistakes from the likes of Liverpool defender Virgil van Dijk, City keeper Ederson, Liverpool forward Mohamed Salah and City’s Raheem Sterling. On an occasion when they had to be at their absolute best, perhaps it was no surprise that top performers suffered the odd wobble.

Jota’s persistence almost forced Ederson to concede an embarrassing own goal in the first half and Van Dijk uncharacteristically chopped down De Bruyne in the second period with a cynical foul, which was worth the booking that followed, given it halted the City midfielder’s charge toward goal.

Salah was in and out of proceedings, his best moment coming 40 seconds after half-time when he created Mane’s goal, while Sterling made too many bad decisions in key positions before he was replaced by Mahrez with a quarter-hour remaining.

Elsewhere, there were plenty of outstanding performances to make the occasion so absorbing. For City, Joao Cancelo was unbeatable and unstoppable at left back as he owned his side of the pitch, while Aymeric Laporte also produced a number of crucial blocks at the back.

Liverpool’s Joel Matip was flawless in central defence, as was his goalkeeper Alisson Becker, who pulled off big saves from Sterling and Jesus as City poured forward in the early stages.

But the big winner, on a day when the teams shared the points, was Guardiola, with the City manager getting everything right, from his starting line-up, to energetic high-press tactics and substitutions; replacing Sterling with Mahrez was a key decision that increase the threat in the closing stages.

It has become a bone of contention that Guardiola is deemed to over-think tactics and selection in the biggest games. Although he is a serial winner, recent examples in the Champions League — last season’s final against Chelsea, when he started without a defensive midfield and striker, being one obvious occasion — have seen him allow the opposition to get into his head.

Selecting Jesus from the start was another surprise here, but Guardiola was rewarded with a rare goal and incredible work rate from the Brazil international, whose energy lifted the crowd and his teammates around him.

The pace in City’s front line of Jesus, Sterling and Phil Foden gave Liverpool countless problems and it was not until the second half, following Mane’s goal, that Klopp’s side steadied themselves and pulled themselves back into the game.

Even then, City always carried the greater threat and looked the most likely winners, to the extent that a draw was a good result for Liverpool, on the day at least. However, it probably was not within the wider context, as captain Jordan Henderson admitted.

“We’ll have to wait and see,” the Liverpool captain said. “They don’t drop many points, we know that. We have to concentrate on ourselves and win as many games as possible. If they slip up we have to be there right behind them. We’ll keep going until the end. It’s not the end of the world, we are still in the race.”

Henderson was a young Liverpool player when a slip did tilt the balance of a title race, so perhaps a subconscious reference to Gerrard’s mistake against Chelsea in 2014 serves as a reminder that anything can happen in the season’s closing stages.

But City are on course to win their fourth title in five season and midfielder De Bruyne knows that his side simply have to maintain their form to lift the trophy on May 15. “Today we played very well; I think we had the upper hand,” De Bruyne said. “This is the way we need to play the rest of the season. I know people said whoever wins gets the title, but it’s too hard, the schedule is too tough for both teams to win every game, but we will try.”

There are 21 points to play for. If either side fails to claim them all, they will end up in second place.

Sunak refers his ministerial interests to the PM’s independent adviser