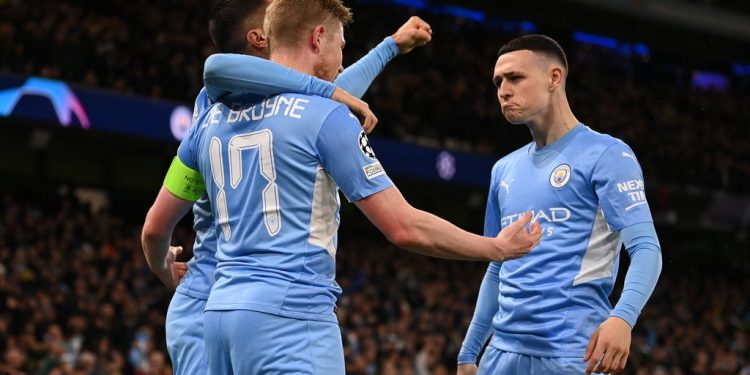 This Champions League quarter-final first leg went against expectation, because the superb Phil Foden did something no-one could stop.

Just when it seemed like Atletico Madrid were grinding out that most vintage of Diego Simeone 0-0s at Manchester City, the playmaker did something ingenious to gift Kevin De Bruyne a goal and Pep Guardiola a 1-0 win.

That it was his from his first touch, having just been brought on as a sub, made it all the more special.

It will only add to the excitement about Foden’s future that a 21-year-old English player is doing things like that in games like this, but he already has some back catalogue, and it also means City are looking very bright for the present.

This 1-0 victory totally disrupts Atletico Madrid’s plans, and means they now have to come out and attack in the second leg at the Metropolitano next Wednesday.

It’s just as well for them there are no away goals this time, although some of this performance was a product of that.

It had seemed to be going rather well – even if Simeone’s animation on the sideline didn’t suggest that.

Atletico were relatively comfortable – at least until the introduction of Foden.

For a coach so often accused of doing something different for the sake of it, Guardiola here started with a tactic he had used before. A problem, however, was that its success could best be described as caveated. In the 2015-16 semi-final, Guardiola instructed his Bayern Munich team to keep crossing the ball at Atletico. That may seem aimless given how good Simeone’s defenders are in the air, but the logic is they are so intensely focused on specific jobs that second balls are a potential source of weakness.

City were evidently trying the same thing here early on, but with one crucial difference. While Bayern had Robert Lewandowski and Thomas Muller to force second balls in that game, and ultimately score twice, City had… no one there. It was like every attacker was waiting on the edge of the box for those second balls, but with no one to actually make them happen.

Debates about a No 9 start depending on how this tie pans out.

For the first 20 minutes of this, it meant Atletico were under siege, but not really under pressure. City didn’t even have a shot on target in the first half.

Atletico didn’t have an attack of any sort in that first 25 minutes, but gradually began to come out once they’d got past that early onslaught.

If that is a classic step for this sort of game, it didn’t quite become classic attack against defence.

The game was more played on a tactical tightrope. City were naturally willing to press forward, but Atletico were no longer willing to sit back so far.

They were countering sharply, and there were three occasions in the opening minutes of the second half when they seemed to be running into the entirely open City half.

There were two problems with this, though.

The first was that Atletico were breaking sharply but not quickly. They just didn’t have the pace. Antoine Griezmann certainly didn’t have the pace he used to. For the second of those breaks, in a passage of play that initially seemed a replica of the crucial goal in 2016, the French star was suddenly away.

The 2016 Griezmann would have scored. The 2016 Griezmann did score. This one was just forced wide, and then into a hurried pass that went nowhere. It was similar with Marcos Llorente a moment later, an initially thunderous break ending with a tame shot easily caught by Ederson.

The second problem was that it allowed that bit more space, as well as a psychological release.

City had more space to play in.

They also, importantly, had more quality to play with.

Foden had by then been brought on, and properly took the game to Atletico. He also gave them something they hadn’t yet dealt with.

For that superb 70th-minute moment of inspiration Foden just used his feet to devastating effect, dribbling at a speed the Atletico defenders just couldn’t cope with it. The playmaker fed the ball to De Bruyne, for the smartest of finishes.

It was really a No 9’s strike, the Belgian drilling the ball under Jan Oblak.

While De Bruyne usually commands most of the attention, especially when he has scored, this was all about Foden.

It was quite an introduction.

It may have been the ending. There was that sense Atletico’s approach for this game had been rumbled.

It doesn’t seem a coincidence that the first real flashpoint soon followed – although it was the first of many – as Angelo Correa got right into it with Jack Grealish and got a booking.

Guardiola meanwhile had to drag his irate substitute away.

That will leave them open, and susceptible to a team that loves that kind of space in these games.

It was all because of Foden.

He didn’t need to overthink. He just did what comes naturally, and has changed the mindset around this quarter-final.