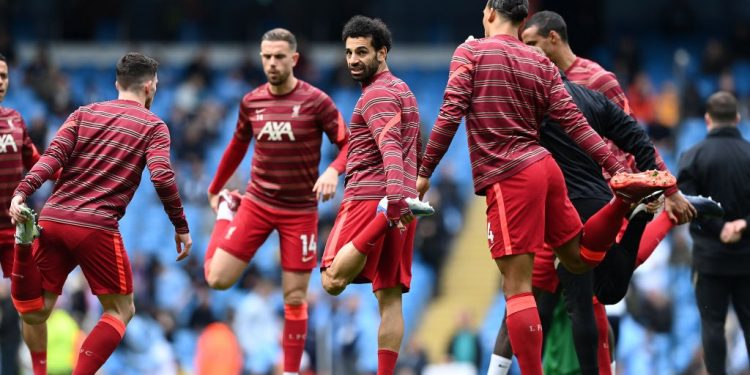 The Premier League title could be decided in today’s contest between Manchester City and Liverpool at the Etihad Stadium as the top two teams go head-to-head. Pep Guardiola’s City were 14 points clear at the top of the table in January but a run of 10 consecutive victories for Jurgen Klopp’s Liverpool has seen them cut that gap to just one point ahead of this afternoon’s clash.

Even though there are seven games to go after today’s showdown, title races between Liverpool and Manchester City are usually decided by the finest of margins – as was the case in the 2018-19 season – and whoever is victorious today will have the edge heading into the final stages of the campaign.

Man City earned a point in the reverse fixture, holding Liverpool to a 2-2 draw at Anfield earlier this season after the Reds twice took the lead, and the teams will also meet again in the semi-finals of the FA Cup next Saturday at Wembley as they chase multiple honours this year heightening the importance of today’s Premier League meeting.

Both sides are also competing for Champions League glory with Manchester City chasing a treble and Liverpool on for a quadruple winning season after also lifting the Carabao Cup back in February.

Follow all the action and updates as Manchester City face Liverpool in this potential Premier League decider:

3 mins: Both teams have started with aggressively high presses when they’re out of possession and have forced the other deep in their own half.

The ball has swapped hands a couple of times with neither team getting into their stride yet.

Let’s get to it then. Jordan Henderson gets the game underway for Liverpool and passes it back to Joel Matip. He sends a diagonal pass over to the left wing but it flies over Sadio Mane and skips out of play.

Here come the teams. The Etihad is packed for this one. The winners of this game could end up lifting the Premier League title at the end of the season.

If Man City win they’ll move four points clear at the top of the table, if Liverpool are victorious they’ll move ahead of City by two points.

The warm-ups are over at the Etihad Stadium and it’s almost time for kick off. Which way will this one go? Who will be sitting at the top of the Premier League at the end of the day, Manchester City or Liverpool?

Mo Salah is vying to score in a fourth consecutive Premier League appearance against Manchester City – the last player to achieve this was Jimmy Floyd Hasselbaink, who did so in five successive games between 2000 and 2003.

‘They despise each other’: Why Man City vs Liverpool could be the peak of the Premier League

As excitement builds around the Premier League, there are different emotions at Anfield and Eastlands. This, in the words of one prominent source, “is why they despise each other”. The build-up to Sunday’s title showdown has already been amplified by a lot of noise.

On the Liverpool side, there has been ridiculous debate about the appointment of referee Anthony Taylor. On the Manchester City side, there have been complaints about “the timing” of another damaging Der Spiegel story. “Must be a big game coming up,” has been one common quip, as if serious German newspapers are Liverpool supporters.

The reality is absolutely none of this affects the players. Figures like Kevin De Bruyne and Jordan Henderson don’t allow that. Neither do the managers. The players are too focused.

Everything is geared towards this. That doesn’t just apply to the squads, though.

There are not many referees better than Anthony Taylor. The 43-year-old is experienced, decisive and mobile enough to keep up with play. He is one of the two English candidates put forward to officiate at the World Cup in Qatar.

Taylor is just the sort of person you would want holding the whistle for the biggest game of the season. Except that a section of the Liverpool fanbase have been in uproar this week because he has been given their team’s game against Manchester City at the Etihad tomorrow. This is simply because Taylor is from Manchester.

The angst of Liverpool supporters was further inflamed by the appointment of Paul Tierney as the VAR official. Tierney is from Salford, 2.5 miles from Manchester. The conspiracy theories started five days before kick-off.

Riyad Mahrez is aiming to become the third City player to score in six consecutive Premier League home games, after Uwe Rosler in 1994 and Alvaro Negredo in 201 but he’ll have to do so off the bench today.

The champions host the Reds on Sunday having seen their lead at the top of the Premier League cut to a single point by Jurgen Klopp’s in-form outfit.

City – albeit having played more games – led by 14 points at one stage but Liverpool, on a 10-game winning run, have been relentless in their pursuit and Guardiola is well aware of their strengths.

Guardiola said: “In the times we’ve played against them (there) are always many games during the game, many decisions, many actions, many details for both sides.

Sunday sees the top two sides face off at the Etihad Stadium where a win would take Klopp’s team two points clear with seven matches to play.

The pair have been involved in some epic battles in recent seasons – in particular in 2018-19 when City pipped Liverpool to the title by a point despite a record points haul for the runners’ up.

While Klopp is not exactly overjoyed at the standards Pep Guardiola’s side have set he acknowledges it has made his players better, which contributed to them winning their first title for 30 years in 2019-20 with a 19-point advantage over City.

“I wouldn’t say I’m thankful that City is that good but it didn’t deny our development,” said the Reds boss. “The last four years since we stepped up a little bit and could close the gap to City is interesting.