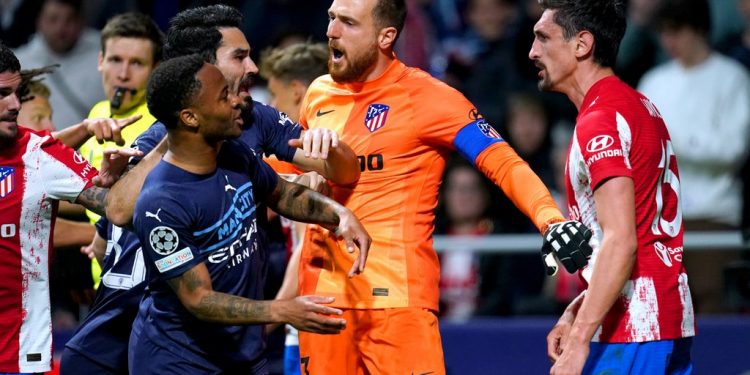 Jack Grealish was involved in a tunnel bust-up with Atletico Madrid defender Stefan Savic at the end of a fiery match at the Wanda Metropolitano.

City came through an ill-tempered second leg, digging in for a 0-0 draw which – after winning 1-0 in Manchester last week – was enough to book a place in the Champions League semi-finals against Real Madrid.

However, the game was clouded by chaotic scenes including a mass brawl in the final minutes in which Savic appeared to headbutt City’s Raheem Sterling. Pictures also seemed to show Grealish, a substitute, then call Savic “a c**t”, and the Atletico defender responded by pulling Grealish’s hair.

After full-time, Savic sprinted towards the tunnel to catch up with Grealish, according to BT Sport, where the duo engaged in another confrontation. Players and staff from both sides poured in once more and several police officers rushed to the scene.

Tunnel footage showed the aftermath, as an enraged Atletico defender Sime Vrsaljko threw an object at City players and had to be restrained.

BT Sport pundits Rio Ferdinand and Joleon Lescott condemned the behaviour of Atletico’s players in the final minutes, in a passage wich also saw centre-back Felipe sent off for a second yellow card after kicking out at Phil Foden.

City manager Pep Guardiola did not want to comment, however, preferring to talk about the football.

“They pushed us a lot, they were excellent in the second half,” Guardiola said. “We forgot to play and we were in big big trouble. They had the chances to score.”

“They are a champion of Spain and played with incredible energy in the second half, better than us and we were lucky we didn’t concede,” he said. “In the first half we had chances to do it and all in all, to reach the semi-finals, if you count the two games it is well deserved.

“The opponent is so tough, all the teams in the Champions League come here and suffer and we knew it.”

The win came at a cost with Kevin De Bruyne and Kyle Walker both coming off after treatment while Phil Foden left the pitch heavily bandaged.

“We are in big trouble,” Guardiola added. “We cannot forget we played three days ago a tough game against Liverpool. We came here, we have a lot of injuries. I don’t know what will happen in the next weeks but today we are going to celebrate.

“It is the third time in Manchester City’s history we are in the semi-finals of the Champions League and it is a big success for us to be there.”

Importance of Business Communication in a Healthcare Atmosphere