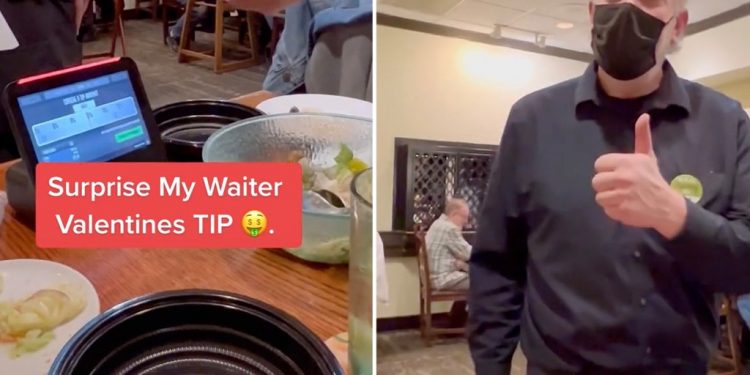 
A TikTok user has sparked backlash for filming himself leaving a 200% tip for a restaurant server.

The man — a self-proclaimed “multi-millionaire” who uses the handle @realkingkhang — took to the app on Valentine’s Day to share a short video showering the waiter with the very generous gratuity.

“I love doing this. Feels so good making someone’s day,” he wrote beneath the video, which was filmed in an Olive Garden eatery at an unknown location.

The clip shows the the man telling the server to swipe on a payment screen until it reaches the maximum tip percentage.

“Swipe as far as it goes. Boom — 200%!” he enthuses, leaving the elderly server stunned.

The bill for the man’s meal was just $46, meaning the server walked away with a $92 tip.

Several people praised @realkingkhang for his generosity in the comments section beneath the video, with one writing: “Lucky waiter!”

However, a majority of viewers railed against the TikToker for filming the heartfelt moment.

“Who cares. You’re only doing it for content,” one remarked. Another chimed in: “If you felt the need to film this for internet clout it doesn’t count.”

Others accused @realkingkhang of being “patronizing” and “self-aggrandizing.” One also questioned whether he was actually a multi-millionaire because he was dining at an Olive Garden.

On Thursday, @realkingkhang returned to TikTok to address the backlash, admitting that critics thought he looked like he was “bragging” and “flexing.”

However, he declared he had no regrets about recording his generous act.

“It doesn’t matter how you live your life, you’ll always be judged by somebody else,” he continued. “The best thing to do is ignore the noise and do and be you!”

It’s unclear where the tipping incident took place, but servers in many states rely on gratuities to survive.

Last November, a Tennessee waitress went viral after revealing she only made 1 cent in wages for 6 weeks of work, with the rest of her income coming via tips.

And while some complained that @realkingkhang’s “patronizing” tip was too big, other diners have been blasted for leaving gratuities that were too small.

Back in December, several TikTok users shamed a Staten Island customer who couldn’t afford to leave a 20% tip for their server.

Other Ways to Manage Pain After Surgery

Other Ways to Manage Pain After Surgery