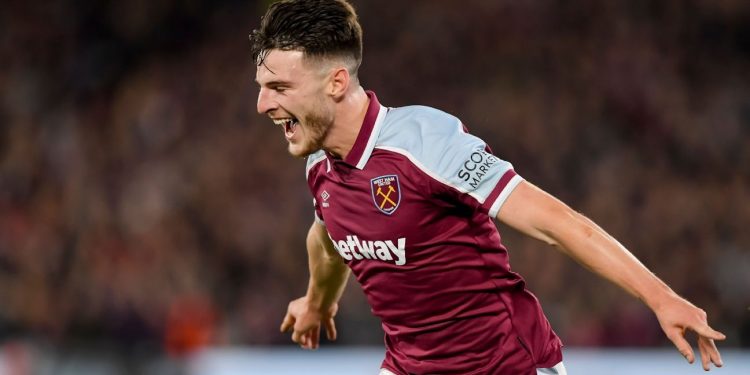 
Manchester United are plotting a midfield overhaul after a quiet January window — ESPN’s Insider Notebook has the latest.

After deciding against adding to their squad in January because top targets were not available, Manchester United are focusing attention on signing a central midfielder in the summer, with work starting before a new permanent manager is appointed, sources told ESPN.

The Old Trafford recruitment department is working to whittle down a list of midfield targets, with West Ham’s Declan Rice, Leeds United’s Kalvin Phillips and Amadou Haidara at RB Leipzig all being considered.

West Ham United are already quoting suitors — including Manchester City and Chelsea — more than £100 million for Rice’s signature while there are doubts about whether Phillips would be willing to move to one of Leeds’ biggest rivals.

United will narrow their list of midfield targets to around 15 before cutting the names to around 10. Negotiations with representatives and clubs will begin after cut down to a shortlist of three.

Midfield has become the focus, sources told ESPN, because the need for an established centre-forward has been reduced by Cristiano Ronaldo’s return to the club. Ronaldo, who has a contract until 2023 with the option of another year, was not originally on the list of targets last summer but the club decided to act once City firmed up their interest.

Detailed recruitment meetings with interim manager Ralf Rangnick are set to be held each month following the closure of the January window on Monday, but there is hope talks to install a new manager will gather pace before the end of the season.

The aim is for the new boss to have input into the players who arrive. The manager and the recruitment department have a veto when it comes to new signings. — Rob Dawson

Barcelona are in advanced discussions with Spotify for the Swedish company to become the club’s principle sponsor, which would include holding the naming rights to Camp Nou, sources told ESPN.

According to sources close to the negotiations, the deal could be worth up to €57m annually to the LaLiga giants, whose partnership with Rakuten expires in the summer. In exchange, Spotify’s name would appear on the front of the Catalan club’s shirts, training kit and alongside Camp Nou.

In addition to their agreement with Japanese e-commerce company Rakuten, Barca also have a deal with Beko to sponsor training kit. That partnership also runs out in the summer.

Barca first signed a four-year deal with Rakuten in 2017, with the initial agreement worth up to €60m per year depending on the team’s success on the pitch. The partnership was extended by an additional season last year, but at almost half the price due to the effects of the pandemic.

Beko’s sponsorship of the club’s training kits started in 2018 and sources told ESPN it was worth around €57m over the course of the agreement.

Meanwhile, no business holds the naming rights to Camp Nou, but president Joan Laporta has said the club are open to change that to help fund the €1.5 billion redevelopment of the 100,000-seater stadium. — Sam Marsden and Moises Llorens

Gab and Juls discuss how Dusan Vlahovic and Denis Zakaria will fit into Max Allegri’s plans at Juventus.

Contract talks with Declan Rice will be restarted by West Ham ahead of a summer window in which top clubs are expected to target the midfielder, sources told ESPN.

The 23-year-old’s agreement expires in 2024 but the Hammers have an option to extend by a further year, yet should he opt against signing an extension, two years will remain on his contract at the end of this season and his value will therefore start to diminish.

The situation is finely balanced as sources claim Rice is keen to play in the Champions League and a failure to secure a top-four finish again this season would give his suitors fresh optimism a deal could be agreed.

There was some disappointment at London Stadium that the Hammers were unable to improve their chances by adding to David Moyes’ squad in January, but the manager earlier this week insisted it was not for a lack of ambition, claiming club-record bids (above £45m) were rejected for three different players.

– A blockbuster summer: Who is on the move?

Rice has turned down two offers to extend his contract and sources claim Chelsea are ready to lead the race for his signature with Thomas Tuchel keen to strengthen his central midfield options.

It was originally thought Chelsea’s longstanding interest originated from Frank Lampard’s desire to sign the player, but sources told ESPN that Rice continues to be a top target under Tuchel.

Rice has links with Chelsea, having been released by the club aged 14, while he enjoys a close friendship with Blues midfielder Mason Mount.

Manchester City and Manchester United are keen on a move for the England international, who has been one of West Ham’s top performers in a campaign that sees them lying fifth in the Premier League. — James Olley

Real Madrid are well-placed to sign Brazilian wonderkid Endrick, sources told ESPN, but want to track his progress first and wouldn’t consider paying the outlandish fees being discussed to sign the 15-year-old.

Endrick shone in the prestigious “Copinha” Sao Paulo youth cup last month, being named player of the tournament as Palmeiras won the competition for the first time in their history.

Madrid could not sign Endrick until he turns 18 in July 2024 but feel they are in a strong position should they decide to make a move, given their relationship with his agent, who also represents Vinicius.

Sources said Madrid would not be willing to splash out more than they did to sign Vinicius Junior, a deal for whom coast €45m in 2018. Further, the club are treading carefully as they “do not want another Reinier,” sources said.

Reinier Jesus signed from Flamengo for €30m in January 2020 and followed in the footsteps of Vinicius and Rodrygo Goes. But while that pair have become important first team members — with Vinicius one of LaLiga’s outstanding players this season — Reinier has endured a troubled two-year loan at Borussia Dortmund. — Alex Kirkland and Rodrigo Faez

Ousmane Dembele is seeking a salary of up to €8m after tax to sign for a new club this summer, sources told ESPN.

The 24-year-old resisted strong pressure from Barcelona to leave during the January transfer window as they look to make space on their wage bill for four new signings, including Pierre-Emerick Aubameyang’s deadline day arrival from Arsenal.

Dembele was offered to several Premier League clubs, including Chelsea and Tottenham, and sources claim the winger’s representatives were seeking a salary in the region of £250,000-a-week; the approximate equivalent of €8m-a-year after tax.

Spurs’ top-earner is striker Harry Kane, who earns £200,000-a-week, and the club quickly decided a deal for Dembele was not feasible, with sources claiming the wage package was a significant factor in Chelsea and Paris Saint-Germain opting against pursuing a deal.

Manchester United held some interest when Ole Gunnar Solskjaer was in charge but sources suggest the club never seriously considered a move for Dembele last month.

However, Dembele is not expected to be short of suitors and interested clubs could offer performance related add-ons with a healthy signing-on fee. Either way, the Frenchman was determined to negotiate an exit on his own terms this summer. — James Olley

Phil Jones’ move to Bordeaux in the transfer window broke down because he did not get guarantees he was going to play regularly, sources told ESPN.

The French club, 17th in Ligue 1 and battling to avoid relegation, wanted an experienced centre-back to add to their squad, but could not promise Jones anything — certainly not a regular starting position — so both parties called off a potential deal.

Jones’ request surprised Bordeaux considering his well-documented injury problems. The 29-year-old played for United in a 1-0 defeat at home to Wolves in January, his first match for 708 days.

Jones would have replaced another former Premier League centre-back in Laurent Koscielny, after Bordeaux terminated the former Arsenal captain’s contract with 18 months left.

Sources told ESPN that Bordeaux believed Koscielny was not committed enough, and that as club captain was not leading by example. Sources within the player’s camp, meanwhile, refuted those claims and said Koscielny was being used as a scapegoat for the team’s troubles. — Julien Laurens