Man United need Luis Enrique, but he’s sticking with Spain (and might be a better fit for Man City or Liverpool) 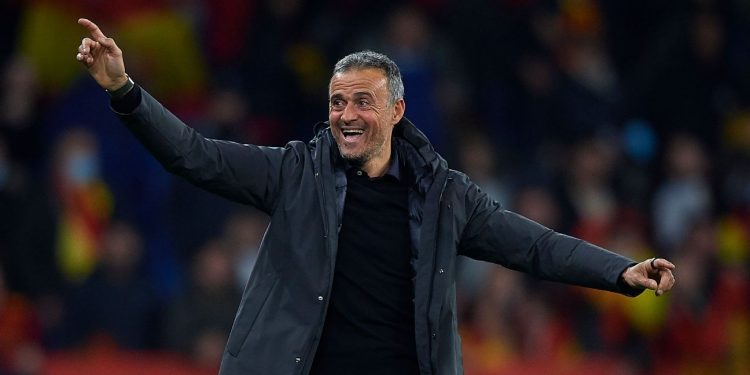 
It’s easy to understand why Manchester United fans fantasise about Luis Enrique Martinez Garcia becoming their next manager. Equally, it’s clear why those at Old Trafford, particularly the decision-makers in suits, could harbour the same futile dream of recruiting the Spain coach.

The ultra-talented, intense, anglophile 51-year-old coach represents much of what United stood for across their dominance of the past three decades in England — plus what they’d love to stand for once more. All the footballing concepts to which he’s wedded — the addiction to winning, the chest-out, hint of danger, “come and take us on if you think you can” attitude, the furnace-like intensity — are what those who fork out hard-earned cash to watch United, and what those who like to spoon-feed themselves on cash generated by United, yearn to reinstall.

However, the harsh fact is that not only isn’t Luis Enrique remotely interested in leaving The Red with a winnable World Cup in November peeking around the corner, but he’s not the right man for Manchester United because, right now, they’re nowhere near ready for him. They’re nowhere near in good enough shape for him to flourish and to impose his coaching ideas.

Frankly, if Luis Enrique chooses not to stay with Spain after World Cup 2022 — the likelihood being that he’ll invest at least another couple of seasons in trying to win a tournament with the likes of Pedri, Gavi, Ansu Fati, Dani Olmo, Mikel Oyarzabal and Ferran Torres, the oldest of whom is 24 and the youngest just 17 — then he would be far more likely to thrive by taking over from either Pep Guardiola at Manchester City or Jurgen Klopp at Liverpool.

I’ll expand a little more on that opinion in a moment, but for now, it’s important to clearly understand the central parts of Luis Enrique’s makeup that make him attractive to United, but will, I estimate, repel him from their current situation.

The only English side to have ever won the Treble have been run by suits, bean-counters and fools for so long that the corrosive effect goes far beyond the team being inconsistent from week to week on the pitch; it runs deeper than not looking competitive in the Premier League or Champions League. Canvas the opinion of some around the training ground on a regular basis and they conclude there are very clear reasons for the often lackadaisical, paper-thin competitive attitudes shown by the first team when the chips are down.

Just as happened during the dissolution of the “Boot Room” culture at Anfield and their old training ground, Melwood, Man United’s ideas, beliefs, rules, habits, disciplines have gradually rusted, been eroded or disappeared. Most of those fighting against that erosion are, for the moment, relieving themselves into the wind (as the old sailors’ expression has it.)

United’s academy coaching and development is, gently, on an upward curve compared to, say, four or five years ago. But there’s a general feeling that too many young talents, both in the first team and the academy, move forward with an innate sense of entitlement. It feels like there’s an absence of the once-infamous, and brutally determined, need to win, conquer and dominate.

It’s not just training sessions, either, but the entire training ground environment that lacks rigour and order; it also lacks one governing, authoritative identity being imposed by a feared and respected leader, but that’s also enforced by a phalanx of equally gritty and focused veteran footballers.

So, to the idea of Luis Enrique at Man United. The man from Asturia, in northwest Spain, isn’t one of those coaches who yearns to build an empire. This is a man who, by his own admission, was a leader and a warrior as a player but didn’t initially imagine himself extending that into management.

In an interview two years ago, I asked him whether his coaching ideas were innate or learned across his successful playing career. He told me: “As a footballer, I didn’t think I’d become a club manager — notwithstanding that I was a leader in the dressing room, and team captain. But when you take a course, you see what’s important and not through a player’s eyes — you see it through the eyes of a coach.”

He discovered that he was as obsessive about the art of coaching and winning as he had been about playing and winning. Analysing the strengths of his own squad, teaching and instructing, picking apart opponents, conjuring up strategies for how to maximise his team’s strengths or nullify/destroy those of the opponents — these things have become his trademark.


Just as Guardiola, the wholly inexperienced coach of Barca B in 2008, insisted that the club immediately invest in expensive new filming technology so that every match he analysed, whether those of his team or his opponents, could be recorded “full-pitch” rather than just “following the ball,” Luis Enrique has clear, immovable and sometimes unusual methods.

At Barca B, exactly one season after Guardiola, then at Celta Vigo or winning the Treble with Neymar-Luis Suarez-Lionel Messi as his forward line with Barcelona’s senior side, you could often see Luis Enrique at training, high upon a crows-nest scaffolding platform — it was specifically constructed so he was 30 feet up in the air and could survey the pitch with a bird’s-eye view for detail. With Spain, he has had a giant screen installed at the edge of the main Las Rosas training pitch so that his analytical videos — the specifics of what he wants his players to do or improve, and what the next opponent does well or badly — are shown during a squad practice session (rather than in a video room well before, or after, there are boots on the ground) so that the instructions can be implemented there and then while the message is fresh in his players’ heads.

The man is, first and foremost, a superb coach.

United need another Sir Alex Ferguson, and that isn’t a facile point about his trophy record, brilliant personality, vision or voraciously competitive spirit. When the Scottish coach moved south from Aberdeen, he took over a club, and a squad, in a mess. Ferguson wasn’t just a ruthless, committed winner; he was there to emulate Matt Busby. He wanted to build an empire.

Even then he was as much a psychologist, man-manager and drill sergeant as he was a pure coach. Don’t you recognise that as precisely what Manchester United need now?

While Luis Enrique possesses innate qualities and learned traits that link him to Ferguson, he has significantly more things about him that could be compared to Roy Keane, one of Ferguson’s most trusted players. All the Pavlovian reactions Keane had as an “Alpha-player,” as a captain, as a winner, and now as a TV pundit, Luis Enrique has in abundance. The litany of ideas — “I have no time for bluffers,” or “there is only one right way to do this,” ‘that’s not good enough” or “bring your A-game every minute of every day without fail or excuse” and even “you should be obsessed about detail and about what it takes to win, and win again,” things you’ve repeatedly heard from Keane — are precisely what Luis Enrique lives and breathes.

Take it from me that while the Spaniard has a modicum more patience than Keane for man-management, he’s as unforgiving (if not more so) once he’s taken a decision that anyone — a teammate, an employee, a staff member, or a squad member — can’t, or won’t, follow the Luis Enrique doctrine to the letter. With Spain, two members of his coaching staff have already been shown the door. I’ve listened to him talking about how any player, irrespective of their reputation, who doesn’t instantly toe the line and sign up for total evangelical belief in the Luis Enrique modus operandiwill be left out in the cold.

Ferguson, by nature, was a people manipulator, someone who saw all the moving pieces and was used to having to invest time and patience in building an empire — in all its aspects. Tempestuous, a disciplinarian: yes. But he’s also willing to give and take, depending on his needs in a particular situation. Of course he understood football intimately, capable of reading matches and opponents, but few who lasted the course with him across his career would outright call him a “coach” rather than a manager or, even, something akin to a general.

By comparison, Luis Enrique is a thoroughbred coach.

Another response he gave me, lifted from a recent interview: “When I was a player, my vision was individual. It was, ‘How can I get through on goal? How should I mark my man? I wonder if I’ll start. Here’s hoping we win trophies.’ It was individual. When you look at it as a coach, boy does the picture change! It’s very complex, full of difficulties.

“It’s a profession that, unfortunately, I take home with me. You spend many nights thinking ‘X isn’t working, Y might …’ It’s a very intense profession that takes a lot out of you, but it’s also exciting. When you see your team do things that you’ve told them, you’ve communicated and the players have taken it on board … and it pays off in the result, it reinforces the group’s faith in you. It’s a very nice feeling.”

The more I describe him, surely, the more you can see what has made United, and their fans, hanker for such a presence.

When I asked him to pick three words to define the footballing principles upon which he’ll stand or fall, he chose “attack,” “pressing” and “ambition.” He likes risk. Matches are to be played on the front foot, the ball is to be dominated; attack is the best form of defence, no quarter must be given or asked. If a match is being won 1-0 with 10 minutes left, there’s no question that it’s a second goal, rather than simply a clean sheet, for which his team must remorselessly continue searching. Or else his players suffer his wrath.

Right now, in my humble opinion, if you put Luis Enrique in charge of Manchester United in their current state, there would, sooner or later, be a situation similar to when Roy Keane despaired of the Irish FA standards and walked away from playing in the 2002 World Cup. I’m certain the Spaniard would not have the patience, forgiveness or understanding of so many people working for the same organisation boasting standards so thoroughly alien from his own. In a given future: Who knows?

Right now, with decision-makers in the Spanish FA president, and director of football, hugely invested in Luis Enrique, faithful to his wishes and with an influx of immensely gifted young players at his disposal, it’ll be a shock if he isn’t still in charge until, at least, the 2024 European Championships in Germany. Perhaps longer.

But football is quixotic, stormy and far from predictable. If City or Liverpool were to cast around when either Guardiola or Klopp leave and decide that Luis Enrique is the right kind of driven, exciting and demanding talent to continue a philosophy, to maintain standards, to evolve a footballing dynasty rather than create one, then he’d frankly be foolish not to be tempted. Because he’d be brilliant in those circumstances.

As for Manchester United, the club and their fans had better look elsewhere. One day, Luis Enrique will be coming to Old Trafford, but he’ll probably be in charge of a bitter rival instead.