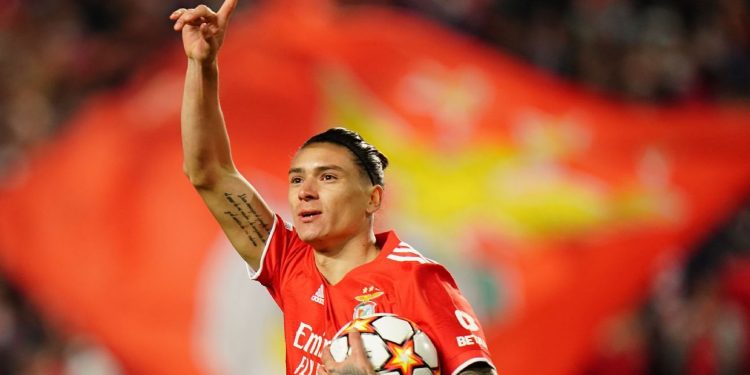 
The summer transfer window is approaching, and there’s plenty of gossip swirling about who’s moving where. Transfer Talk brings you all the latest buzz on rumours, comings and goings and, of course, done deals!

Benfica could part ways with striker Darwin Nunez in the summer if his reported release clause of €150 million is paid, according to The Sun.

Nunez, 22, has found himself on the radar of a number of Premier League clubs this season, with West Ham United having a club-record bid of €70m turned down during the January transfer window.

The Uruguay international has 31 goals in 36 appearances across all competitions for Benfica this season, including a hat trick in Saturday’s 3-1 league win over Belenenses, and Manchester United and Arsenal are believed to be leading the race for his signature.

Benfica are reportedly prepared to allow him to leave for a fee in the region of €126m, but that’s still an incredibly large fee given the current financial climate and The Athletic claims they could settle for €70m, with Chelsea and PSG also credited with interest.

Benfica coach Nelson Verissimo said: “As a Benfica fan, I hope that he [Darwin] will leave for a similar figure to that of [Atletico Madrid’s] Joao Felix [€126m]. But that is an issue that is not my department. But day by day, we realise that we have a player that makes a difference, and all the great players awake the interest of the great European clubs. Darwin is at this point.”

11.23 BST: Arsenal are set to reignite their interest in Leicester midfielder James Maddisonbut will see Tottenham rival them for his signature, says The Sun.

Maddison, 25, has caught the eye with some impressive performances in the Premier League in recent seasons and now could make the step up.

10.40 BST: Man United should be looking to make some big chances.

Steve Nicol says Man United play like a side who don’t like each other and thinks they need to overhaul the squad.

10.09 BST: Barcelona striker Pierre-Emerick Aubameyang was asked about the future of winger Ousmane Dembele after the club’s 3-2 win away to Levante on Sunday night.

Dembele, 24, has set up three of Aubameyang’s last five goals, but his contract expires in the summer and the France international has not managed to agree new terms. Though his agent Moussa Sissoko was reportedly in Morocco for talks with Barcelona director Mateu Alemany last week.

“Ousmane knows me well so I’ve to be ready when he gets the ball on the right,” Aubameyang told Movistar. “He has to stay here.”

09.34 BST: Aston Villa midfielder Douglas Luiz is the subject of interest from Arsenal after the London club failed to land him in January, says Football Insider.

Arsenal boss Mikel Arteta is in the market for central midfield reinforcements, as well as a striker, in the summer and the 23-year-old Luiz has impressed at Villa.

The Brazil international has a contract until June 2023 so his transfer value is decreasing, with Villa keen to turn to West Ham’s Kalvin Phillips or Brighton’s Yves Bissouma.

09.10 BST: Manchester United are exploring alternative options to hiring Robin van Persie as part of the club’s new coaching staff under Erik ten Hagthe favoured candidate to become manager this summer, due to concerns that the 38-year-old will not be able to secure a UK work permit, sources have told ESPN’s Mark Ogden.

And with United confident that a deal can be struck with Ajax and Ten Hag, efforts are already being made to hire a coach with knowledge and experience of the Premier League to work within Ten Hag’s backroom team.

08.30 BST: Erling Haaland has dismissed interest from Manchester United when considering his next move over fears they could not match his ambitions on the pitch, sources told ESPN’s Mark Ogden.

United are looking for a striker this summer and indicated to Haaland and his representatives earlier this season they would be willing to match any financial offer he received from another club. However, sources told ESPN that intermediaries reported back that the striker would base his decision only on a club’s “sporting project” and not where he could earn the most money.

Manchester City and Real Madrid lead the race to sign the Norwegian if he chooses to leave Borussia Dortmund in the summer. Both clubs are regulars in the latter rounds of the Champions League while United have reached the quarterfinals only twice since 2011. United are not guaranteed to qualify for the competition next season, sitting seventh in the Premier League table, three points adrift of the top four.

Craig Burley sees so many problems at Manchester United and isn’t sure Erik ten Hag will be able to succeed there.

– Bayern Munich chairman Herbert Hainer believes Thomas Muller will remain at the club for the rest of his career. Speaking to BR24 Sporthe said: “I am firmly convinced that Thomas Muller belongs to Bayern like the Frauenkirche [cathedral] belongs to Munich. I am convinced he will end his career at Bayern.” The 32-year-old attacking midfielder will enter the final year of his contract in the summer.

– Ivan Perisic is set for more talks at Internazionale as a number of clubs continue to monitor his situation closely at the San Siro. The 33-year-old winger will meet with Inter representatives soon, according to Fabrizio Romanowith the Serie A club keen to keep him at the club. The Croatia international’s contract will expire at the end of the season.

– Juventus are in talks with the agent of Sergej Milinkovic-Savicreveals Calciomercato. The Lazio midfielder is reported to be valued at around €70m, but the Bianconeri will look to negotiate a lower fee as they continue their search for midfield reinforcements in the summer. The 27-year-old has made 31 Serie A appearances this season for Lazio.

– Valencia are willing to allow Jasper Cillessen to leave in the summer after reports that PSV were keen to land the Netherlands goalkeeper, writes Marca. The 32-year-old’s deal is set to expire in 2023, and it is reported that the LaLiga club are willing to do business as they look to enhance their economic situation. Cillessen has starred 15 times this season in La Liga for The Che.

– RB Leipzig are making an attempt to swoop in for Erik ten Hag despite being linked to Manchester United, reveals the Mirror. It is reported that the Bundesliga club have made a lucrative offer to the 52-year-old Ajax Amsterdam boss, after talks recently took place. Sources have previously told ESPN that United is set to finalise a deal for Ten Hag to over as permanent manager at Old Trafford.