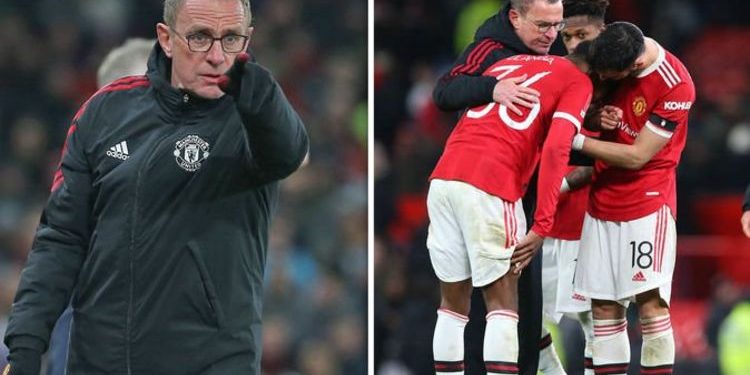 
Manchester United boss Ralf Rangnick has spoken out following his side’s FA Cup defeat to Middlesbrough on Friday night. The Red Devils went into the game hoping to make the fifth round of the competition. Yet they ended up crashing out instead, with Boro winning a tense penalty shootout.

United took the lead against Middlesbrough through Jadon Sancho.

The England international opened the scoring with a pinpoint finish just moments after Cristiano Ronaldo had fluffed a penalty, sending his effort wide of the goal.

United were on top but, after the interval, the situation changed.

Middlesbrough started to defend better and managed to equalise through Matt Crooks, whose goal stood despite Boro appearing to handle the ball in the build-up.

With neither side able to score, the match then went to penalties after a dull extra-time period.

And Anthony Elanga missed the decisive spot-kick to send the visitors through, sparking wild celebrations in the away end in the process.

THINK YOU KNOW SPORT? Test your sporting knowledge with our tricky quiz

“In the moment when they scored, it was clear that VAR would not allow this goal to stand.

“We were not well-positioned in that moment, too open and allowed them the counter, we should have won the game.

“Anthony Elanga, anyone can imagine how he us, he is shattered and absolutely disappointed.

“It was the eighth penalty which had all converted.”

While it was agony for United, however, it was ecstasy for Boro.

Paddy McNair, who came through the United academy, admitted he was thrilled with the result.

“It was unbelievable,” said McNair.

“We started the first half really slow but we deserved the win overall.

“They weren’t taking their chances and that gave us a lift.

“We are on very good form. We rode our luck at times.

And defender Sol Bamba, who scored in the shootout, added: “I wanted to take a penalty and momnets like this is why I am still playing football, we had very good away fans and it was set for us tonight.

“All the way through my treatment it was for moments like this. The hard work, support from my family and football community I can only thank them.

“Without their support I wouldn’t be there. I still have the drive to keep going.

“The family and Mrs were in distress and panic but it is pure joy and I will enjoy it tonight.

“It is a fairytale, enjoy being back on the pitch after everything I have been though and long may it continue.

“In this competition you never know, we just knocked out one of the favourites in Manchester United.”

These two S&P 500 stocks had their worst weeks ever

These two S&P 500 stocks had their worst weeks ever