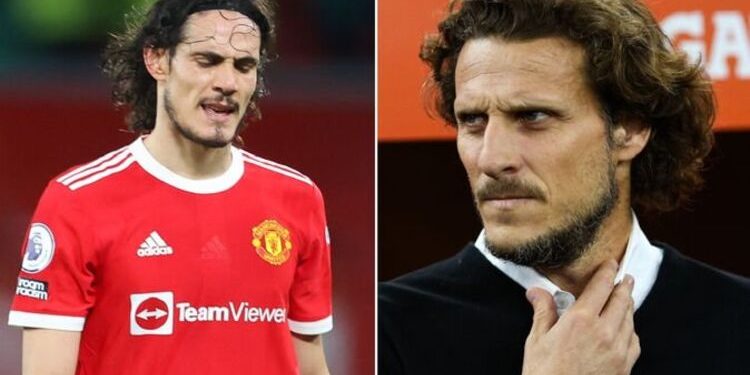 
Former Manchester United forward Diego Forlan says Edinson Cavani could have taken them to “the next level” if he had been given a proper run as their No 1 striker. Cavani, 35, looks set to bring an end to his Old Trafford stay this summer after two injury-hit seasons.

But fellow Uruguayan Forlan feels it will be a case of missed opportunity all round given United have seen only flashes of the striker’s true ability in a frustrating 20-month stay. “I think at United if he had the opportunity to play many games in a row, he would have been scoring many many important goals for the club,” he said.

“He did that last season if you remember. At the end he was playing many games before the Europa League final and you could see in the way that many people were behind him, players and the way he took the team to the next level.

“Why? Because he was playing most of the games. This season he started the season injured and then he didn’t play for one reason or another which I don’t know. He never played two or three games in a row and it is difficult for a player to perform well if he doesn’t have many games.”

Cavani’s injury record and the arrival of Cristiano Ronaldo with a guaranteed starting berth when fit combined to put a dampener on the South American’s final season. But Forlan, who will return to Old Trafford for the first time to play a Legends charity match for the Manchester United Foundation against Liverpool on May 21, says he will still be remembered as a great. “He has been a very professional player, very strong physically and you saw why he was signed towards the end of last season,” he said.

It is the best part of 18 years since Forlan left Old Trafford but this season, like most of the ones before it stretching back to 2004, his name is still sung. Not every week. Of late United fans have had much to shout about and it has not been in of alumni past rather at the misfiring cast in front of them.

But occasionally, particularly when Liverpool are lined up across the halfway line, the strains of Volaré in homage to their Uruguayan forward spring up. “He came… from Uruguay … he made… the Scousers cry.”

It will be heard at Anfield on April 19 when United travel for their Premier League clash and again in the less febrile atmosphere of a charity ‘Legends’ match on May 21. And it will be further evidence of not only the enduring currency of inflicting pain on Liverpool as he did with a four-minute match-winning double at Anfield in December 2002 but of the affection in which he is held.

Forlan’s face breaks into a smile when it is pointed out fans still sing his name. “There are so many ex-players for United who did so much for the club but they still sing my song and they still remember. It’s unbelievable. I’m very grateful,” he said.

It is a typically self-effacing response from a player who earned that bond in three seasons between 2002-04 which revealed a character everyone liked. Signed from Independiente in Argentina, Forlan famously didn’t score for six months yet never once stopped grafting and never complained.

He embraced the weather, the city, he taught Cristiano Ronaldo English and did huge amounts for Manchester United disabled supporters groups. He was much more than his goals. “I was really happy. Everyone knows the headlines that it took me six months to score the first goal but I didn’t play all the time and if you look at the minutes I scored one goal every two games for two and a half years,” he said.

“I scored important goals and won titles and I tried to improve my game and I did. I didn’t have the opportunity to go back to United after playing in Spain which I would have liked but I can look back pleased with my time.”

Forlan scored 17 goals in 97 appearances for United, but went on to win the European golden boot twice in seven seasons with Villarreal and Atletico Madrid. “Coming from Argentina was a big change. I stepped into a dressing room with Beckham, Roy Keane, Seba Veron, Laurent Blanc, Van Nistelrooy – all very nice guys but important guys in world football.