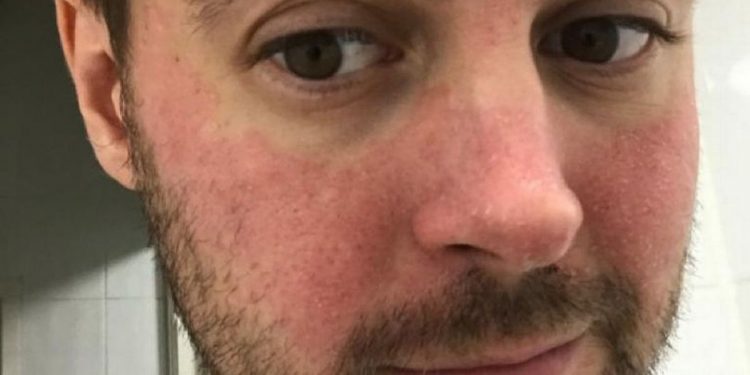 Writer Will Hayward had struggled with red, blotchy and irritated skin for years, but it was not until lockdown hit that he discovered the cause of the flare-ups. In an article by our sister title WalesOnline, Will wrote that his skin issues began around ten years ago, with a ‘burning feeling’ on his face leading to ‘horrible red blotches’ within a matter of hours.

Sometimes Will would also suffer from ‘scratchy rashes’ on his neck and in his beard, apparently without any reason at all. Unsure of what was going on, Will tried various ways to tackle the problem. He gave up alcohol after noticing rashes after nights out, but to no avail.

He even tried out ‘every moisturiser under the sun’, slathered himself in sunscreen, and gave up dairy products – but nothing seemed to do the trick.

READ MORE:‘I had IVF for my first baby – If I could go back in time, I wouldn’t have children’

Sadly, Will was left struggling with his self-esteem due to his mysterious flare-ups, and he has previously cancelled dates and turned his camera off during video calls. When trying to find a cause, a dermatologist wrongly diagnosed him with rosacea, a condition that results in blushing, flushing, and visible blood vessels, gave him some creams and encouraged him to ditch caffeine.

He said this helped to an extent, reducing some of the low-level redness. However, the blotches and flare-ups remained ‘just as severe’ and appeared just as frequently.

Heading back to the dermatologist, Will was this time diagnosed with seborrheic dermatitis which is a common skin condition among those with rosacea that causes itchy rashes with flaky scales. Will carried on with his caffeine-free diet, his antibiotic rosacea cream for rosacea, and also added a ‘special shampoo to the mix.’ However, once again, he had received the wrong diagnosis.

Despite taking careful measures, his skin condition seemed to just worsen, right up until the day the UK entered lockdown. After this point, he saw significant improvements within a matter of weeks.

Will said: “Occasionally it would still go a bit bad but in those early days of the pandemic my skin was better than it had been for years. I didn’t understand it but I wasn’t complaining!

“Then as the world started to reopen I started going out more and my skin gradually got worse again. This was particularly true when I returned to the office after a year and a half last autumn. Suddenly I was back to square one – in fact, it was worse.”

After being referred to another dermatologist, Will underwent a patch test. It saw ‘loads of different potential allergens’ stuck onto his back in order to figure out exactly what he was allergic to.

It was discovered that Will was in fact allergic to two chemicals, 2-brom-2-nitropropane -1,3-diol and Methylisothiazolinone. He said the first chemical was easy to avoid as it has been slowly phased out over the past twenty years.

However, the second chemical, Methylisothiazolinone, is a different matter entirely, given that it is found in a number of everyday products, including soaps and shower gels. It is also in everyday essentials such as washing-up liquid and furniture polish.

He purged his home of such products. Yet Will ran into further difficulties at the office when he realised the automatic air freshener in the toilets contained the chemical.

Will wrote: “Luckily I have a really supportive employer and they removed the product. I am now sat in the office writing this article and for the first time in years I am at my desk and my skin doesn’t hurt!

“Now I may be getting ahead of myself here. I haven’t been back to the doc yet and I am still on the antibiotics. However, I think after a decade I finally understand my condition and know how to manage it.

“Over the coming months, I will be coming off the antibiotics and various cremes and potentially introducing chocolate back into my life (I would ****ing love my first Twix in four years) to see what impact it has.”

More children were hospitalized for COVID during omicron, CDC study finds. Most were unvaccinated. – USA TODAY