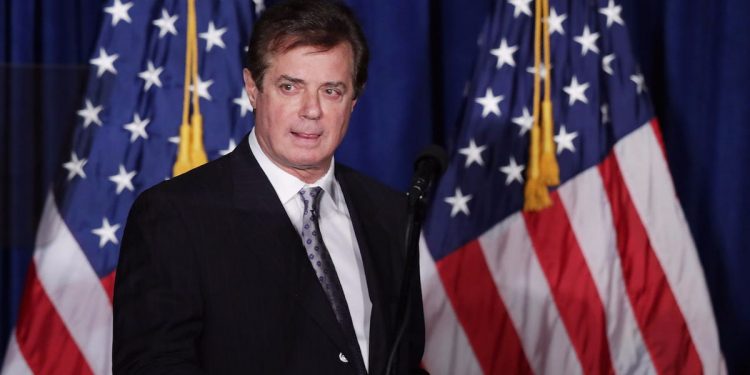 
Former Trump campaign chairman Paul Manafort was removed from a Dubai-bound plane on Sunday because he was carrying a revoked passport, The Associated Press reported.

Alvaro Zabaleto, the Miami-Dade Police Detective, told the AP that Manafort was escorted from the plane at Miami International Airport without incident. A lawyer for Manafort did not immediately return the outlet’s request for comment.

Manafort served as former President Donald Trump’s 2016 campaign chairman for six months. He joined the operation in March 2016 and departed in August, three days after The New York Times reported that Ukraine’s pro-Russian Party of Regions had earmarked $12.7 million in undisclosed cash payments for Manafort for his work consulting for the party between 2007 and 2012.

Manafort was a central figure in several threads of the FBI’s Russia investigation because of his extensive ties to pro-Russian individuals and entities.

Manafort was indicted in two separate cases stemming from the FBI’s investigation into Russia’s interference in the 2016 election and whether the Trump campaign conspired with Moscow to tilt the race in his favor.

Both indictments centered on his political consulting work from 2006 to 2015 for pro-Russian interests like the Party of Regions and former Ukrainian President Viktor Yanukovych.

In the first case, brought in Virginia, Manafort and his associate, Rick Gates, were charged with 32 counts of tax fraud, bank fraud, and failure to report foreign bank accounts. The superseding indictment accused Manafort of, among other things, laundering more than $30 million in income from his foreign lobbying.

In the second case, in Washington, DC, prosecutors alleged that Manafort did not register as a foreign agent while lobbying on behalf of Yanukovych and the Party of Regions. They also accused him of making misleading statements about his overseas work, conspiring to launder money, and attempting to tamper with witness testimony.

He was convicted in 2018 of eight out of 18 counts in the Virginia case. He later pleaded guilty to one count of obstruction and one count of conspiracy and agreed to cooperate with prosecutors in the second case.

US District Judge Amy Berman Jackson voided the plea deal when she found that Manafort lied to prosecutors after saying he would cooperate. The former Trump campaign chairman was ultimately sentenced to 7 1/2 years in federal prison for his crimes.

In August 2020, the Republican-led Senate Intelligence Committee released the final installment of its own report into Russia’s election interference.

Trump pardoned Manafort in December 2020. He was one of several campaign associates who were criminally indicted or struck plea deals whom Trump either pardoned or commuted the sentences of before leaving office in January 2021.

Thieves get creative in the face of high gas prices