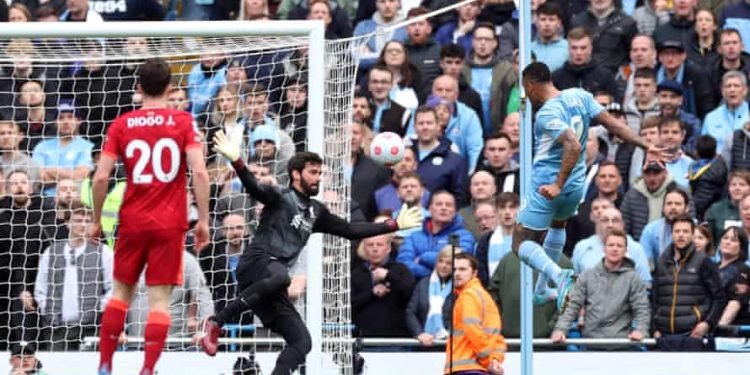 46 min The funny thing about these teams is that each has incorporated aspects of the other. City are looking to get it forward more quickly than before, trying diags in behind full-backs, whereas Liverpool have bought Thiago. So far, it’s working better for the former, but excuse me whole I interrupt myself!

Klopp was out before his players, so he must’ve largely left them to their own devices. Here they come now, and City follow them.

Luis Diaz and Firmino are warming up and I’d expect to see the former soon – though I wonder if the latter might help them get out, holding the ball up so they can get men forward.

“You are right about Thiago,” says Rick Harris, “and I wonder if Klopp will go to a three and bring Gomez on and push the full backs up as Robertson is being given a torrid time too. Great game. Got to be more goals in this!”

“You picked on Henderson not having a great game,” says Yash Gupta. “He didn’t have a good one last time these two faced. Unnecessarily pushing forward and conceding a hell of a lot of space for Foden, Cancelo to operate in. I think the best decision for Pep has been no Ruben Dias. It was a forced one. But Stones on the right works better with Laporte than Dias, and Sadio Mane found that. Though other Diaz is on the bench.”

I just don’t think Henderson has the gas he once did, and he also plays alongside Thiago, not Wijnaldum. Against most sides that doesn’t matter, but City are good enough to make that difference count.

Half-time email: “How was Mane not offside for the equaliser?” wonders Norrie Hernon. “He’s yards off, but it’s not called because it’s headed away – which leads to the equaliser. If the defender risks leaving it, then it goes to Mane and he’s flagged – but the defender has to take the risk, which doesn’t seem fair. It’s a gaping hole in that law. Surprised the Sunaks haven’t taken advantage….”

Ha! Agree with this though – I’d be happy for offside to mean offside, precisely for that reason.How can defenders defend otherwise?

The Guardian is funded by readers like you. We are entirely independent – there is no billionaire owner or proprietor who can censor what we write about. We are also free from a paywall, and everything we publish is open and available for all, regardless of means or status. But we rely on contributions from readers like you to power our journalism. If you’d like to support our work, from as little as £12, you can do so here.

That was an entertaining a half as you’ll see this season. Both sides are good enough to exploit the other’s defensive weaknesses – weaknesses they’re able to hide from almost every other team in the world – but City’s passing game is working much better for now. The second 45 should be a jazzer.

45+1 min I mentioned Thiago being a problem for Liverpool, but Mané has also been almost anonymous. I’d not be surprised to see Luis Diaz replace him, if not at half-time, shortly afterwards.

45 min You can’t play a high line without pressure on the ball, and Liverpool aren’t getting about the pitch quickly enough to stop City from attacking the space. Anyhow, they have free-kick on the left and it picks out Laporte! But his stretch hits the post and the bounce falls unkindly, after which they flag goes up for offside.

43 min Foden, who’s been quiet, turns up down the left and whips in a nasty low cross, but before it can reach Sterling, Robertson slides in. He doesn’t get the ball, but him being there prevents yerman from seeing the flight – though if he’d gambled, he might’ve got to it.

42 min However, they’ve been better than a goal better and it’s fair to assume that Liverpool will improve after half-time, meaning it’s unlikely that this one-goal lead will be enough. They may win by one, but I doubt it’ll be 2-1.

41 min So far, on the other hand, Guardiola has got his tactics absolutely bang-on. His defensive midfielders are doing an OK shielding job, and his attackers are picking holes in Liverpool’s defence at will.

39 min I said just before that Thiago is barely taking part, but what’s also significant is that Henderson isn’t what he was. When this side was at its best, Liverpool would trample their opponents into the turf, but they’ve not quite got that physicality in them these days.

City have earnt that! The corner is headed clear, but only as far as Cancelo, who shifts his weight inside to open up the pitch and drills a gorgeous, flat diag that catches Liverpool stepping up as Jesus sneaks in behind. He might snatch at the chance, but instead leaps, allows the ball to hit the inside of his foot, and that’s a much harder finish than it looked.

36 min City look poised to score again, Rodri picking up Robertson’s weak clearing header and knocking off for De Bruyne, who squares into a decent area. He knows there’s no one there, but he knows the defenders can’t be sure of that, and sure enough, it yields a corner.

35 min Meantime, here come City again, Laporte offered time to pick out Cancelo down the left as Alexander-Arnold dreams of tangerine trees and marmalade skies. He nips inside and wellies a shot, but it’s deflects into the near-post side-netting, then the corner comes to nowt.

33 min Klopp will fancy his side to score again, but might be alarmed at their lack of midfield control. Though he was involved in the goal, the game is largely passing Thiago by, because at this level, he’s maybe a player for City’s style, not Liverpool’s – though I know its evolved since he replaced Wijnaldum.

32 min Rodri mugs Van Dijk and swings a cross towards the far side, but Alexander-Arnold does really well to intercept, sliding in to poke home.

29 min Stones his a lovely long pass out to Cancelo who tiptoes in off the left, pulls inside, then feeds a square pass into De Bruyne … who swivels into an instashot that flashes past the near post. The defending hasn’t been great, but this is a game.

29 min The free-kick is quickly cleared and Liverpool have a counter, Ederson off his line and Alexander-Arnolld, fed by Salah, taking aim from halfway. But he slips as he shoots, the ball dribbling back to the keeper; that we see that as a missed opportunity tells us how stupidly good he is.

28 min We thought City would target the space behind Alexander-Arnold, but it’s Robertson they’re victimising, sticking diags at him and he’s struggling to cope. De Bruyne nips the ball around him into space, wears the inevitable bodycheck, and the defender is booked.

You’re so unsophisticated. Shame on you. Winnnnnnnerrrrrssssss!

25 min City win a free-kick out on the right and De Bruyne swerves a beauty towards the back post where Rodri awaits! No one’s anywhere near him, but he can’t quite crane his muscles enough to divert his header across the face to meet the path of the two men running in.

23 min But as I type that it’s City getting careless at the back, someone – Walker I think – sending a backpass to Ederson, almost on the goalline. He allows it an extra roll to make an angle to pass out, slips, and suddenly he’s under the bar with Jota on top of him! So he calmly passes out to Cancelo, while everyone else swallows their insides.

23 min City are showing that, if you’re quick enough and clever enough, you can worry Liverpool’s defenders as they try to play out. They’ve already won the ball like that three or four times today.

21 min De Bruyne catches Van Dijk in possession, and though a succession of challenges and blocks stop City from working a clear shooting lane, they end up with a corner when Sterling’s shot is deflected behind. Alisson catches the corner, but when he hurls it out, City immediately win the ball back, Foden’s cut-back behind both Jesus and De Bruyne.

19 min City are back knocking it about and another ball in behind Robertson,an, er, diag, from Cancelo to Jesus, forces Van Dijk to stick the eventuating cross behind. The corner comes to nowt.

17 min Diogo Jota, though – it’s remarkable how good he’s turned out to be, and how almost every player Klopp and Michael Edwards buy slots in just like that. I’m not sure there’s ever been a run of purchases so good – roughly, 50% of transfers working out is respectable.

16 min Walker picks out Sterling with a coax over the top down the right; he lays back to Jesus, who sweeps a shot straight at Alisson.

14 min Phew! Football is often like life, but this game is fulfilling all of its promises.

Thiago is picking passes now, a big switch defeating the press. A ball over the top for Mane doesn’t come off – as it goes, Mane is offside – but the flag stays down and Robertson sweeps a cross towards the back post, where Alexander-Arnild’s velvet touch sets Jota, who sweeps the equaliser into the far corner. He knows what to do.

13 min City are liverpooling Liverpool here, but the visitors are inching into this.

11 min Liverpool enjoy their first little spell, Alexander-Arnold, Henderson and Salah working a triangle down the right. But City are back into shape quickly, and Cancelo quickly pounces at the first pass that gives him a sniff.

10 min Another ball in behind, this time down the left, turns Van Dijk, and though he finds another gear when he needs one, Sterling gets really close having given him a serious start. That’s what doing a cruciate at 29 does to you, I’m afraid.

9 min A ball into space – Jesus is causing so much trouble – and he gets in between Van Dijk and Alisson, falling when sandwiched. He wants a penalty, but the ref is having no such thing.

Simon Cowell on Wedding With Lauren Silverman: ‘I Am Planning It All’