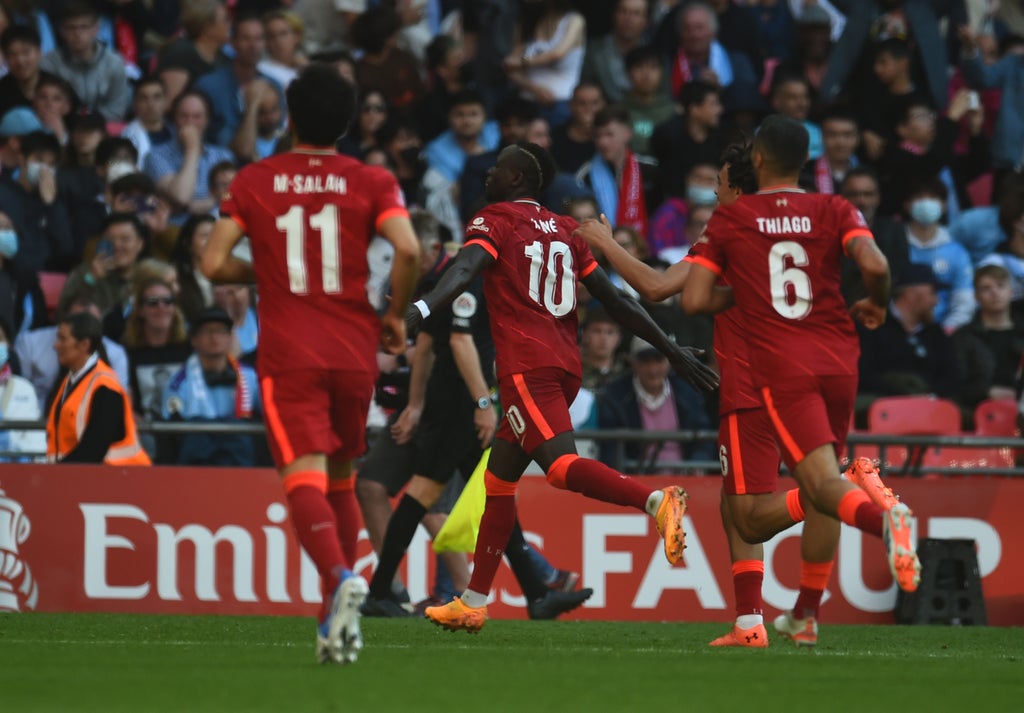 Follow for live updates as Manchester City and Liverpool renew their rivalry in the FA Cup semi-finals at Wembley. An enthralling 2-2 draw at the Etihad last weekend saw Manchester City remain one point clear in the Premier League title race and the quality and intensity of the match means another encounter between Pep Guardiola and Jurgen Klopp’s heavyweight sides promises to be another unmissable ocassion.

The minute’s silence before the semi-final began to mark the 33rd anniversary of the Hillsborough disaster was stopped early after being disrupted by noise from the Manchester City fans at Wembley.

While last weekend’s Premier League draw means the title is once again set to go down to the wire, the outcome of this afternoon’s semi-final will have a more immediate impact on City and Liverpool’s respective ambitions this season. For the Reds, this will be the greatest test yet of their quadruple hopes, while City are also trying to keep their treble bid alive. The winner of Chelsea and Crystal Palace’s match tomorrow will await in the final.

Today’s match comes after a busy midweek for both teams which saw City and Liverpool progress to the Champions League semi-finals, and a step closer to a potential European final in Paris. Liverpool were able to rest key players as they advanced against Benfica, but City’s exertions in a fiery and brusing battle at Atletico Madrid could be significant in what has been a short turnaround.

Follow live updates from Manchester City vs Liverpool in the FA Cup semi-finals, below.

88 mins: More changes for Liverpool. Thiago Alcantara makes way for Curtis Jones. More time is eked out of the game, just a couple of minutes to go in the 90 now.

85 mins: Chance! Liverpool flick the ball over to Mo Salah on the right side of the City box. He darts inside and has a shot blocked by Zinchenko. The ball comes back to him though and his follow up is stopped by Zack Steffen.

Time is running out for City. Can they find another goal to set up a tense finish?

80 mins: Into the last 10 minutes of the 90 at Wembley. Liverpool responded well to City’s early goal in this half and they’ve kept the Premier League champions fairly quiet since.

Trent Alexander-Arnold flicks a cross in from the right and finds Luis Diaz who shoots but sends his effort into the arms of Zack Steffen.

75 mins: Chance! Luis Diaz expertly brings an aerial ball down with a superb first touch before dinking the ball over to Mo Salah. Zinchenko gets to the ball first but his header back to Steffen is weak and Salah collects the ball. Steffen closes him down and Salah chips the goalkeeper but knocks his shot into the side-netting!

Naby Keita is taken off by Jurgen Klopp and Jordan Henderson comes on for the final 15 minutes or so.

72 mins: Save! A pass into midfield is intercepted by City and sent up to Jack Grealish. Gabriel Jesus makes a run in between the Liverpool centre-backs and screams for the ball. Grealish obliges with a fine through ball that Jesus collects and carries into the box. He opens up the far bottom corner and shoots but Alisson gets a leg to the effort and knocks it wide.

69 mins: Ibrahima Konate flicks another ball over the top and almost gets Mo Salah in behind the City defence but Ake gets a glancing touch to the ball and forces Salah wide of the box.

66 mins: Trent Alexander-Arnold takes this one for Liverpool but overhits it and City recover possession after a foul in the penalty area.

63 mins: Liverpool seem to be trying to take the sting out of the game by passing the ball around the back line. This draws City into the press and the ball gets played over the top to Mo Salah. He brings it down beautifully and slides a pass up to Sadio Mane ahwo carries the ball over to the right of the box. Salah makes an underlapping run into the middle of the ball before Mane picks him out. He’s looking to shoot but Ake slides in and pokes the ball out for a corner.