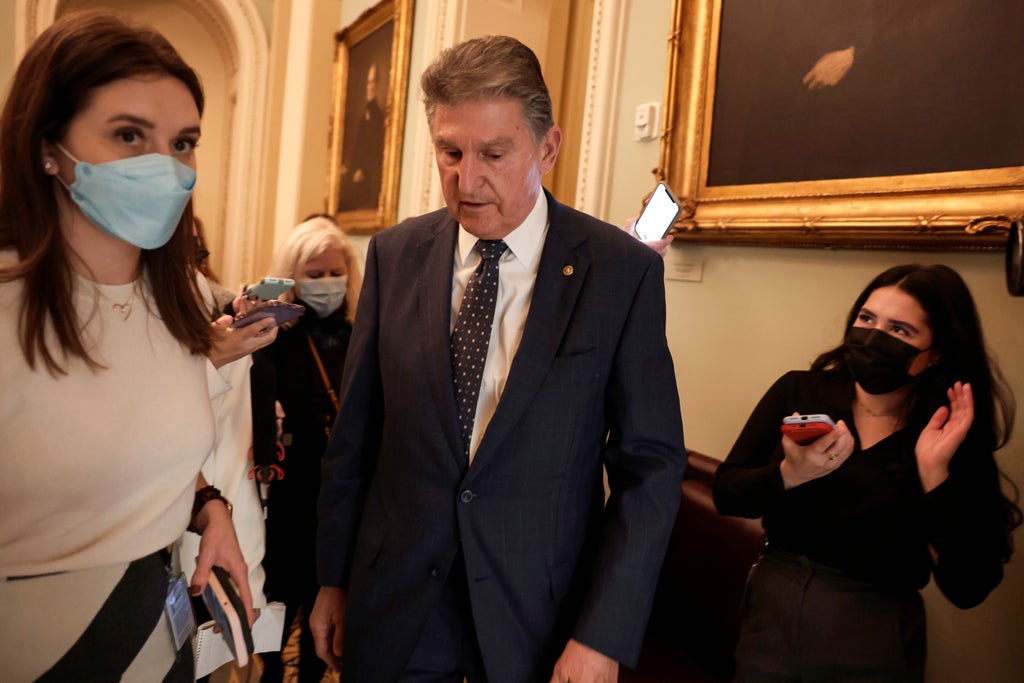 Democrats saw chances of their proposed Build Back Better legislation delayed as Senator Joe Manchin did not relent to his objections to the legislation despite a crucial tax credit expiring at the end of the month.

The expanded child tax credit passed as part of the American Rescue Plan. The credit expanded the tax credit from $2,000 to $3,600 for all families making up to $150,000 and single-parent heads of households that earn up to $112,500. Parents automatically receive monthly payments of $300 for children younger than age six and $250 per child between six and 17. The final payments were disbursed this week.

The House of Representatives passed Build Back Better last month after it passed the bipartisan infrastructure bill, largely on the basis of mollifying Mr Manchin

The West Virginia Democrat told The Independent as he left Senate Minority Leader Mitch McConnell’s office that he’s always been supportive of the child tax credit and “I always will be”.

But Mr Manchin has raised objections to the tax credit, saying that rather than extending it for one year, as is the case in Build Back Better, it should be extended for 10 years as a means of being transparent about the cost, CNN reported.

In the past, Mr Manchin raised multiple objections to the legislation, such as opposing a $3.5 trillion price tag and putting paid family leave in the bill. In response, the White House whittled the number down to $1.75 trillion and excluded paid leave in its framework before House Speaker Nancy Pelosi put it back in the version the lower chamber passed.

In response, during Senate votes, Sen Kirsten Gillibrand, a proponent of paid leave, and Colorado Sen Michael Bennet, one the main proponents of the tax credit, said they planned to speak with Mr Manchin about their respective priorities.

Mr Bennet said before votes that he wanted to tell Mr Manchin about statistics from The Treasury Department earlier this week that announced 61 million children benefited earlier this week and that 305,000 children in West Virginia qualified for the credit. The state received $80,711,000 overall through the programme, according to Treasury data.

“I’ve seen this place work miracles, holiday miracles, when the tax cuts that need to be extended for rich people,” he said. “I think poor kids in America need that much out of the US Senate.”

Mr Bennet also pushed back on Mr Manchin’s objections, saying he thinks the child tax credit should be made permanent and Congress should fully pay for it.

To compound Democrats’ troubles, the Senate Parliamentarian released an opinion rejecting a third proposal to include immigration reform in the legislation.

“Throughout the entire reconciliation process, we have worked to ensure that immigration reform was not treated as an afterthought,” the senators said. “The majority of Americans support our efforts to provide legal status for millions of undocumented immigrants in the United States because it would raise wages, create good-paying jobs, enrich our economy, and improve the lives of all Americans.”

Democrats are hoping to pass Build Back Better – which, along with an expanded child tax credit, includes provisions to combat climate change, increased funding for home services for people with disabilities and elderly people, child care, and universal preschool – through a process called budget reconciliation, which would allow them to sidestep a Republican filibuster.

But with only 50 Senate seats and Vice President Kamala Harris breaking a tie, President Joe Biden needs every Democratic Senator to support the legislation. Mr Manchin and fellow conservative Democrat Sen Kyrsten Sinema of Arizona have raised objections to the legislation in the past.

Mr Biden and Mr Manchin have had repeated discussions trying to come to an agreement and the president said he would continue speaking with Mr Manchin.

“It takes time to finalize these agreements, prepare the legislative changes, and finish all the parliamentary and procedural steps needed to enable a Senate vote,” Mr Biden said in a statement. “We will advance this work together over the days and weeks ahead; Leader Schumer and I are determined to see the bill successfully on the floor as early as possible.”

Despite the challenges, Ms Gillibrand said Democrats were ready to pass the legislation when needed.