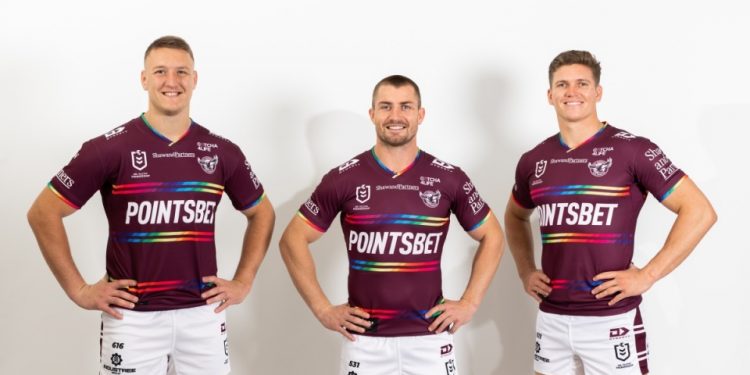 Manly have told their seven boycotting players not to attend Thursday night’s clash against the Sydney Roosters for safety reasons as the fallout of their jersey drama continues.

The Sea Eagles will finally wear the league’s first pride jersey, but not before a week of drama that resulted in the request for players to stay at home to ensure their safety.

The advice comes as it became clearer how several opportunities for both players and NRL bosses to be aware of the jersey slipped through the cracks in planning, that began as early as the pre-season.

It’s believed Dynasty Sport offered the inclusive rainbow design to several of their clubs, with Manly the only NRL team to take up the option.

The design then had to be put into the NRL’s licensing team, before manufacturing was approved after some minor changes.

While the exact submission date of Manly’s jersey is unclear, some clubs have already sent the Anzac Round designs for 2023 given the time required for the process.

In the time since, Manly have parted ways with chief executive Stephen Humphreys with a new one not due to start until next week.

That is also just the start of the process.

Clubs submit their planned strips for each round of the year well in advance, with the Women in League round jerseys entered in around round six.

The jersey was ticked off on by the NRL’s football department given it did not in any way clash with the Roosters’ jersey.

Everyone that mattered was across the design after its official approval, except for Manly’s players, coaches and the NRL’s bosses.

Ultimately, that failure in communication cost the Sea Eagles what should have been a landmark moment.

Instead, little time was available to explain to players the reasoning behind the significance of the “everyone in league” jersey, which included the LGBTQI community.

The seven players had religious, cultural and in most cases family issues on their mind, and opted not to wear the jersey.

Even at that point if Manly had wanted to change their stance it would likely have been too late, given each approved jersey design must be used in that season.

ARL Commission chairman Peter V’landys was also still bewildered on Wednesday as to why Manly had chosen Women in League round to use the jersey.

Because despite several points where Manly worked with sections of the NRL, there was no real reason for any of those departments to pass the information to the top.

In that time, Manly management also did not contact the NRL to run them through their plans, perhaps another result of not having a CEO.

The end result is a Manly side missing seven fit players on Thursday night, with two wingers on debut and a bench utility playing for the first time since 2019.

It’s the kind of the line-up that would leave the likes of James Tedesco, Luke Keary, Joey Manu and Sam Walker licking their lips.

It’s also the kind of siege mentality Hasler’s sides have usually thrived on.

Not that Roosters coach Trent Robinson can’t see it working this time, with both teams level on wins in eighth and ninth.

“The issue has been created by them, usually siege mentalities are against an opponent that does something to you,” Robinson said.

“I don’t think they can take that line.”

Are you a millennial? Your net worth has likely doubled since the pandemic began (but there’s one big caveat)

Are you a millennial? Your net worth has likely doubled since the pandemic began (but there's one big caveat)