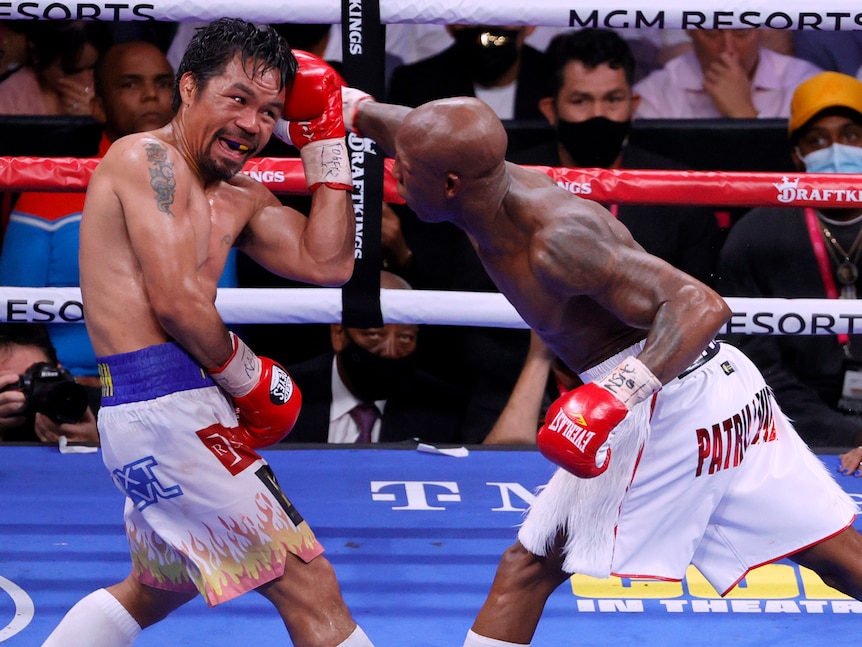 Boxing legend Manny Pacquiao has been beaten in what might be the final fight of his stellar career by Yordenis Ugás, who won by unanimous decision in Las Vegas.

The 35-year-old Ugás — a replacement for Errol Spence Jr who took the fight on just 11 days notice — retained the WBA (Super) welterweight title, spoiling what the majority of the crowd in Las Vegas had hoped to be a farewell party for the eight-weight champion.

For Pacquiao’s 22nd career fight in boxing’s mecca, a 17,438-strong crowd both welcomed and farewelled the Filipino with a thunderous ovation befitting of one of the all-time pugilist greats.

Whatever the script had said about giving Pacquiao a fitting sendoff though, Ugás was intent on ruining the party and classily deposed the hall of famer with an exceptionally executed game plan.

The taller of the two men, Ugás measured his jab perfectly throughout the fight, making full use of his 5cm reach advantage to control the space, despite throwing far fewer punches across the piece.

The Cuban had to absorb some strong, trademark flurries but when Ugás landed he was precise, timing his jab brilliantly and unleashing his powerful right to force the typically aggressive Pacquiao back.

Ugás seemed to be landing with more power too, intermittently rocking Pacquiao’s head and pounding on his body, although he also strayed low at times earlier in the fight.

“He’s a great competitor, but I came in here to show I am the champion of the WBA,” Ugás said through a translator.

“A lot of respect for him, but I won this fight.”

Pacquiao, who has spent just over two years out of the ring, simply could not get close enough to hurt the Cuban and fell to his first defeat since the dramatic loss to Jeff Horn in Brisbane in 2017.

With the senator expected to announce a bid for the Filipino presidency in the coming weeks, fans have suspected that this would be the 42-year-old Pacquiao’s last fight.

“I don’t know. Let me relax and then make a decision,” Pacquiao said when asked if he would lace up the gloves again.

The defeat was his eighth in a glittering career in which he fought in every division from flyweight (50.8kg) to middleweight (72.57kg) since turning pro in 1995.