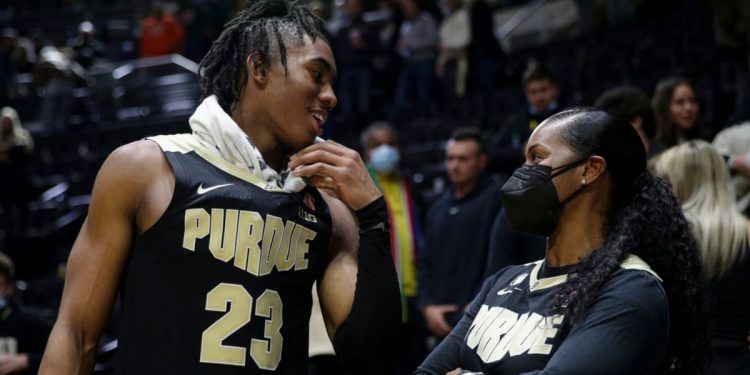 Niele Ivey took the saying “it runs in the family” to heart on Monday night, as she led Notre Dame into the Sweet 16 of the women’s NCAA tournament.

Less than 24 hours, her son Jaden, powered Purdue into the Sweet 16 of the men’s bracket.

Niele Ivey and the No. 5 Fighting Irish cruised to victory on Monday evening, downing No. 4 Ohio State, 108–64. However, the stress for her began on Sunday when Jaden was taking the court against No. 6 Texas.

The sophomore Boilermakers guard was sensational against the Longhorns, racking up 18 points, three rebounds and three assists. Although Purdue was in control for most of the contest, his mother couldn’t help but be stressed for him.

Niele has been watching Jaden throughout the NCAA tournament thus far in between the Fighting Irish’s games in the women’s bracket. After Notre Dame’s win on Monday, she admitted that she was more worried during her son’s latest game than she was during her team’s own second round matchup.

“It’s so special. But I was so excited last night. First of all, my stress is as a mom. Today I was relaxed. Last night I was stressed,” Niele Ivey said postgame. “I was just so happy that he’s living out his dreams, I’m living out my dreams, and to watch him help his team get to the Sweet 16 was just so special for me. It was hard not being there, but he knows that I have a job to do, as well. I had a FaceTime with him earlier just before the game, so we’re there for each other in spirit. But yeah, it’s just a special bond. It’s a special, unique situation. We’re both living out our dreams. I’m super blessed. I feel blessed to be in this position, and I just feel that God has his favor on both Jaden and I.”

After the results of the last two days, the Iveys and their respective teams will turn their focus to the end of the week. Jaden’s Purdue squad will square off against No. 15 Saint Peter’s on Friday, while Niele and the Fighting Irish will face a tough test against No. 1 NC State on Saturday.

Fortnite Chapter 3: Season 2 has no building, which is proving to be controversial

Fortnite Chapter 3: Season 2 has no building, which is proving to be controversial