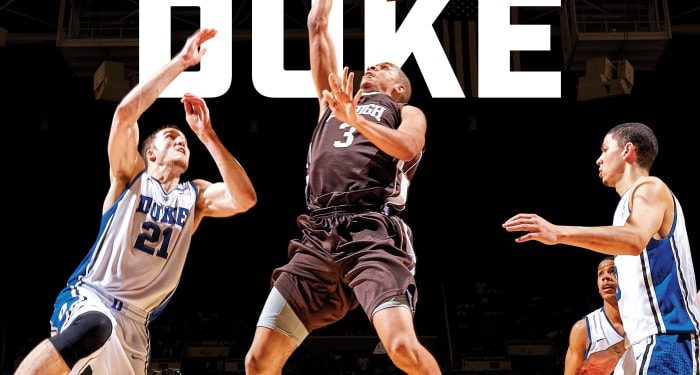 An expert’s take on the men’s NCAA tournament

I’ll admit that I don’t follow college basketball as closely as I once did, but I do get pumped up for the NCAA tournament—and especially the first weekend. The men’s tournament starts today at 12:15 p.m. ET with Michigan and Colorado State. Before things get going, I wanted to ask one of our college basketball experts—Kevin Sweeney—a few questions about the men’s tournament. (Ben Pickman will fill us in on the women’s tourney tomorrow.) My questions are below in bold, followed by Kevin’s answers.

In your Danger Rankings, you highlighted Baylor as the No. 1 seed with the highest chances of making an early exit because they have two top players who are sidelined by injury. Are the Bears the team in the field that has been most affected by injuries?

The only other team that comes to mind that has been as negatively impacted by injuries this season as the Bears has been No. 5 seed Houston. The Cougars lost star guard Marcus Sasser, an All-American candidate, to a season-ending foot injury just before Christmas. It truly felt like Houston’s chances of making a repeat trip to the Final Four ended the moment Sasser went down.

That said, injuries have certainly taken a toll on Baylor. Losing emotional leader Jonathan Tchamwa Tchatchoua and top shooter LJ Cryer has been a huge blow to this team and makes the Bears far more vulnerable to an early exit. Without them, Baylor isn’t very deep, particularly at the center position. Add in a tricky draw, and navigating the East Region will be quite the challenge for Scott Drew’s team.

Arizona is another team with injury concerns. Point guard Kerr Kriisa has an injured ankle that looked really nasty in the photo he shared Monday. But our experts (you included) are still high on the Wildcats. I guess you think they have enough to make up for Kriisa being absent or limited?

Well, it certainly helps that we saw Arizona beat a really good UCLA team on a neutral court in Las Vegas this past weekend without Kriisa, particularly with almost no time to prepare for life without him. With or without Kriisa, the Wildcats are one of the nation’s most explosive teams. One coach who played them this season described them to me as “Gonzaga’s X’s & O’s with Duke or Kentucky’s talent.” They share the ball at a high level, have a tremendous scoring guard in Bennedict Mathurin and are hard to score on at the rim because of the presence of center Christian Koloko. Even if Kriisa can’t come back, this group is in good shape.

I found your ranking of potential tournament Cinderellas very helpful. But if you had to pick one team from that list to advance the furthest in the tournament, which would it be?

The team with the best path, in my mind, is Loyola Chicago. The Ramblers are certainly no strangers to deep tournament runs, and most of this group was around last season when they went to the Sweet 16. Star guard Lucas Williamson was a key rotation piece when they made the Final Four back in 2018. Plus, the draw is relatively favorable. Loyola takes on an Ohio State team that has lost four of five coming into the Big Dance, and should they advance they get a Villanova team that won’t overwhelm them athletically.

You’re one of three SI experts who picked Iowa to advance to the Final Four. What is it about the No. 5 seed Hawkeyes that has made them such a popular pick?

I was in Indianapolis last week at the Big Ten tournament and saw this Iowa team grow up before our eyes. This team is playing tremendous basketball right now. In fact, one analytics model considers the Hawkeyes to be the second-best team in the country since Feb. 1. Keegan Murray is one of the best players in the nation and impacts the game in so many ways, but young Hawkeyes such as sophomores Tony Perkins and Patrick McCaffery have really made strides in recent weeks, too. This group is explosive on offense and is in perhaps the most wide-open region.

Gonzaga is a pretty heavy favorite to cut down the nets in New Orleans in a few weeks. You’re one of many experts picking the Bulldogs to win it all. Is it really their tournament to lose?

Yes, it is. Gonzaga isn’t quite as good as they were last season, but there is no team anywhere close to as overwhelming as what Baylor was a season ago. The Zags are loaded with weapons on the offensive end, and Chet Holmgren’s presence gives them the rim protector they didn’t have last year. And while they haven’t won it all yet, no team has had more success in the NCAA tournament consistently in recent years than Mark Few’s team. This is their year.

📧 SI’s Morning Madness newsletter is back. Our free, daily NCAA tournament newsletter has everything you need to stay up-to-date on all the madness. Sign up for free at SI.com/newsletters and read today’s edition here.

Sorry for the omission

I can’t believe I wrote on Friday about how Alex Ovechkin was poised to move into third on the NHL’s all-time goals list and forgot to mention in yesterday’s newsletter when he actually scored his 767th goal.

The historic goal came in the third period against the Islanders on Monday. Ovi snuck a wrist shot past the goalie’s short side directly off a face-off. The goal moved Ovechkin past Jaromír Jágr. Only Gordie Howe and Wayne Gretzky stand in front of him.

Jágr recorded a video message congratulating Ovechkin on becoming the NHL’s all-time leading scorer among European-born players that played in the arena after Oveckhin passed him.

​​“But keep scoring, keep scoring, because as you know, I didn’t retire from hockey yet, and there is a chance I might come back to the NHL and start chasing you,” Jágr warned.

Today’s Daily Cover is a great way to get ready for the start of March Madness. Michael Shapiro looks back at Lehigh’s upset of Duke 10 years later. … Nick Selbe breaks down the Rockies’ surprising Kris Bryant signing. … Wilton Jackson explains why Iowa’s Caitlin Clark is the player to watch this March. … Conor Orr examines the messy breakup between Baker Mayfield and the Browns.

Notre Dame prevailed in double overtime over Rutgers in the First Four. … The Dodgers are reportedly signing Freddie Freeman to a six-year deal. … In NFL free agency news, the Bills are adding Super Bowl champ Von Miller. … Stephen Curry hurt his foot against the Celtics on what Steve Kerr thought was a dirty play by Marcus Smart. … In news that perhaps only I care about, Minor League Baseball is bringing back the historical league names that it dumped last season.

5. Kevin Durant’s tweet acknowledging that he’s going to get fined for directing profanity at a spectator

4. Pat Beverley turning up the intensity against the Lakers, as he always does

3. Spencer Dinwiddie’s buzzer beater for the Mavs to knock off the Nets in Brooklyn

2. Russell Westbrook air-balling a three and Karl-Anthony Towns looking to the sky to see which way the wind was blowing

How about an Irish-themed question for St. Patrick’s Day? Although I guess I’ve always been puzzled by why a school in Indiana with a French name called its sports teams the “Fighting Irish,” I hadn’t really bothered to look into the origin of Notre Dame’s nickname until today. Some accounts suggest that the name was first used in 1899. When did Notre Dame officially adopt Fighting Irish as a nickname?

Yesterday’s SIQ: Which NFL team did Howard Schnellenberger coach for two seasons before becoming one of college football’s best coaches?

Answer: The Colts. Schnellenberger won three national championships as the offensive coordinator at Alabama, parlayed that into a job coaching ends (basically wide receivers) for the Rams and then landed the Dolphins’ offensive coordinator role in 1970. His role with the undefeated Super Bowl champion Miami team in ’72 led to a job as the head coach of the Colts.

Schnellenberger went 4–10 in his first season in charge, then opened the following season with three straight losses, at which point he was fired.

The story of his dismissal is a wild one. As reported then by The New York Times, Colts owner Robert Irsay had wanted Schnellenberger to start Bert Jones at quarterback. The coach preferred Marty Domres. During the second half of a 30–10 blowout loss to the Eagles, Irsay was on the sideline and asked Schnellenberger when he was going to bench Domres for Jones. Schnellenberger “came back with a tart reply, which he later could not recall,” the Times reported. “The retort led to his dismissal within the hour.”

Irsay named general manager Joe Thomas the interim head coach. Thomas, who had scant coaching experience, was said to be shocked by the decision to appoint him to fill Schnellenberger’s role. No one was more shocked by the move than Schnellenberger, though. The Times reported that Irsay did not tell Schnellenberger he was being let go and that the coach “heard about his dismissal in the nearby coaches’ room through an open door.”

With that mess behind him, Schnellenberger returned to the Dolphins as offensive coordinator in 1975 and stayed for another four seasons before jumping to college football as the head coach of the Hurricanes.

You have to trust me when I say I selected this cover to feature on this date before Tom Brady announced he was coming out of retirement. But Brady’s announcement Sunday obviously brought back memories of Brett Favre’s two unretirements.

Alan Shipnuck’s cover story, obviously, aged like milk. That’s not his fault, of course, but it’s still very funny to look back on this line knowing Favre would announce four months later that he was coming back:

“​​So many athletes stick around too long, displaying diminished skills and a depressing mortality, but he is leaving at exactly the right moment. How can we be sure? Because it hurts to say goodbye.”

Favre’s “diminished skills” were on full display in 2008 with the Jets. He led the league in interceptions with 22 and ended the season with three straight multipick games, leading Peter King to write, on the occasion of Favre’s second retirement, that he had “dimmed his legacy with his lousy play in the final month of his final season.”

But then Favre came back and excelled in 2009 with the Vikings, propelling them to an NFC championship game appearance while recording the lowest interception rate in the NFL.

His career ended unceremoniously one year later after being concussed by a hard hit on a frozen outdoor field at the University of Minnesota, following the collapse of the Metrodome roof.

Favre’s waffling on when to hang it up will unfortunately be one of the defining elements of his career. That 2009 season showed why he was right to give it another go, but his lackluster ’10 season and the depressing note that it ended on were a reminder of how difficult it can be to know when it’s the right time to walk away. No one would have knocked Brady for retiring for real after last season. Now he has to hope that he crafts a better conclusion to his career than Favre did.