Marcos rule to return to Philippines after election landslide – Reuters 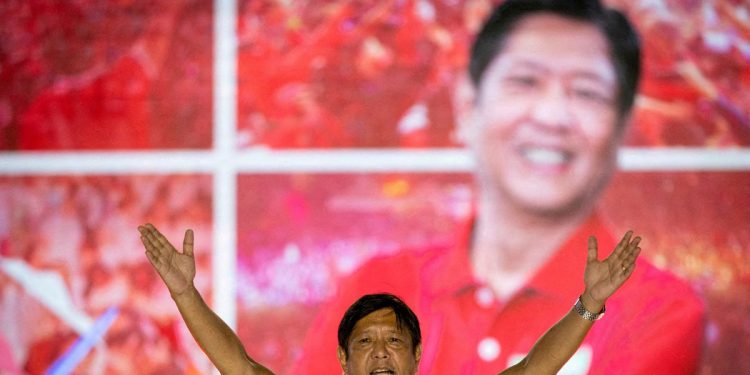 May 10 (Reuters) – Ferdinand Marcos Jr, the son and namesake of the Philippines dictator deposed in a 1986 popular uprising, won a presidential election by a huge margin on Monday, according to unofficial results, marking a stunning comeback for the country’s most famous political dynasty. read more

Following is reaction to his victory.

“Marcos’s apparent landslide electoral victory is not a guarantee that he will be a popular and/or effective leader, but it gets his presidency off to a strong start. In particular, it will create a strong initial gravitational pull on members of Congress …. and will mean more technocrats/economists will be willing to serve in his cabinet.”

“One of the key watchpoints under his administration will be whether corruption and cronyism – already notable risks in the Philippines – worsen. It will be interesting to watch whether he recognises these concerns and signals/takes action in the coming weeks to reassure foreign investors, or if he mostly appoints close family and other personal connections to key positions, reaffirming investors’ worries.”

“The victory puts Marcos in a powerful position. Given his family background and his chequered political career to date, there are concerns among investors that his election will fuel corruption, nepotism and poor governance.”

“Marcos gave away few policy details on the campaign trail. But one thing he is keen to do is resume the ‘Build, Build, Build’ infrastructure programme of President Duterte, which he hopes to ‘expand and improve’. There is little doubt that the Philippines would benefit from upgrading its infrastructure, which is rated as among the worst in Asia.”

“The incoming president is also keen to pursue closer ties with China. Low interest rate loans from China could help limit the fiscal impact of the infrastructure push.

“Courting China would likely involve a trade-off in relations with the Philippines’ traditional ally, the U.S. There seems little economic rationale for turning away from a country that accounts for a greater share of export demand than China, has invested heavily in the large business process outsourcing sector and is a huge source of remittances.”

“Marcos Jr’s victory signals the worst ascendancy and concentration of dynastic political power in the country’s political history. But (Vice President Leni) Robredo’s campaign has also birthed an opposition force which could challenge the impunities of the ruling regime if adequately led by progressive leaders who can inspire and move with the people.”

“He will soon be the duly elected president. But 2022 is not 1972. This is not the end of Philippine democracy, though it may accelerate its decay.”

“The United States would be better served by engagement rather than criticism of the democratic headwinds buffeting the Philippines.”

“Marcos is a policy cipher. He has avoided presidential debates, shunned interviews, and has been silent on most issues. He has, however, been clear that he would like to take another crack at improving ties with Beijing.”

Republicans splinter on how to handle a post-Roe world – POLITICO

Republicans splinter on how to handle a post-Roe world - POLITICO