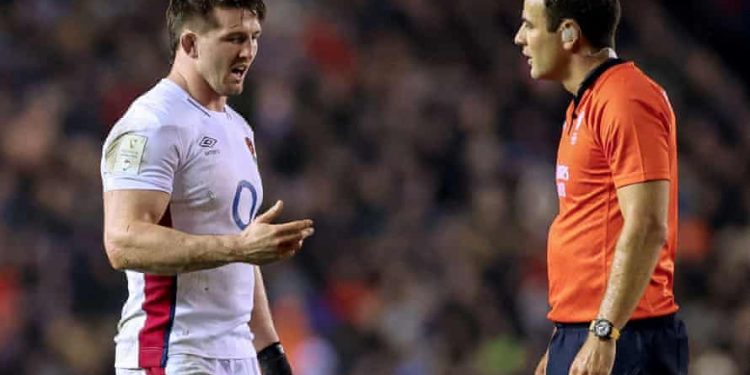 
Last time England made the trip to this stadium was back in February 2020, their last away game before the world turned upside down. That was a tight, miserly game on a miserable wet, grey and windy day, and there were long stretches here when it felt as if they had picked the contest up right where they’d left it before the pandemic.

The biggest difference was in the England team. Only five of this starting XV had been in that one: Elliot Daly, Tom Curry, Lewis Ludlam, Maro Itoje and Kyle Sinckler. One of them, Daly, was playing in a different position while another, Ludlam, was making his first start since that previous encounter.

It was the greenest team Jones has put out in the Six Nations, with a new backline and a new captain in Curry. You could see it, too, in the telling moments. They looked and played like a work in progress.

Curry kept a can of Red Bull by the posts during his warmup, and kept swigging from it right up to the final minutes of the match. Whatever he did with the energy, he didn’t waste it on his team talk in the huddle, which ran to a scant mouthful of words. They do say he is a man who leads by his actions. And there were plenty of those: in the first half Curry carried the ball more than anyone – seven times – but he only made 11 metres. It was dirty work because he was bogged down in a muddy battle with his opposite number, the devilish Hamish Watson, who seemed to be there in front of Curry every time he lifted his eyes.

Curry’s play rather summed up his side’s in that first half. England controlled the possession and the territory in those first 40 minutes; they dominated both, in fact. But they weren’t able to do anything too much with either of them.

There were moments when they came close: a hanging kick from Marcus Smith which sailed just over Max Malin’s fingertips as he leaped for it out on the right wing, a rolling maul that they carried over the line but which ended with the ball being held up. Scotland, on the other hand, made it into England’s 22 exactly once, and scored a fine try while they were there.

England did not lack effort. Following Curry’s lead, they threw themselves into the game body and soul. But they lacked effect. Eddie Jones said afterwards they had not been “clinical” enough. It felt more like they just weren’t ruthless enough to understand that they had to press home their advantage. They needed something extra, some edge, some inspiration. And then, early in the second half, they found it.

They launched another messy, brawling rolling maul in Scotland’s half, and just as it began to falter, Ben Youngs prised the ball out the side, glanced over his left shoulder and saw Smith rushing up behind him. Youngs made the pass. Smith only had 10m or so to go – it was a split-second business – but that was all he needed to light up the game. He swerved one way and shimmied the other, a switch which left Finn Russell grasping at air while Smith slid over the tryline.

Boy, they’re going to get awfully sick of Smith up here by the time he’s finished. They might have had their fill of him in this match if Jones hadn’t replaced him with George Ford soon after. Jones struggled to explain that “it’s a 23-man squad and we felt George could do a job”. And it did make some sense: his team were leading by seven and he wanted fresh legs (and old hands) to shut the game down.

It wasn’t Ford’s fault but England immediately started to unravel, and a game they had almost won ran away from them again. Five minutes later Scotland had been awarded a penalty try, and England were a man down after Luke Cowan-Dickie was sent to the sin-bin for slapping the ball into touch.

There was heavy pressure coming down on England now and the atmosphere inside the stadium, which had been simmering all afternoon, began to boil over. In the tumult they lost the run of themselves. Joe Marler ended up filling in at hooker for a defensive lineout while Jamie George was left on the bench; he failed to throw the ball five metres and the set piece collapsed in a heap. Jones took the blame for that one himself. They conceded two penalties in short succession, Scotland kicked one of them, and all of a sudden the hosts were three points up. One felt England’s lack of a cold, hard edge then, and felt it again during the long series of reset scrums that carried on into overtime, but which ended with an uncertain attacking play that fizzled out in midfield.

There will be a lot to unpick about those final 15 minutes when Jones runs the team debrief on Monday. Between Curry’s effort, Smith’s electricity and all the other good things they have going, this England have all the makings of a great team. But they are missing some important qualities and they have a lot of learning to do. This defeat will be a particularly painful lesson.

Joe Rogan apologizes for using N-word in past; Spotify removes about 70 old episodes