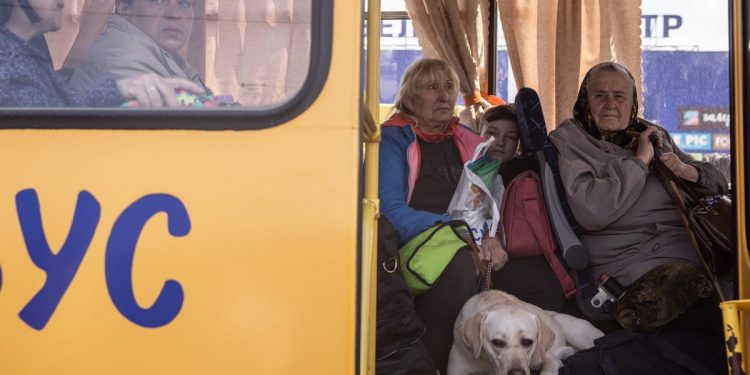 The mass evacuation of Mariupol was underway Monday with Ukrainian authorities hoping thousands more residents would escape the devastated city that once was home to almost 500,000 people.

Mayoral adviser Petro Andryushchenko told Radio Svoboda that buses were rolling toward Zaporizhzhia, about 140 miles west of Mariupol. People were also encouraged to join the exodus in their own cars.

“We hope that thousands of our Mariupol residents … will get to Zaporizhzhia tonight or tomorrow morning,” Andryushchenko said Monday.

The Ukraine military said civilians were already arriving in Zaporizhzhia, a city of about 750,000 people, and were being provided hot meals, physical and psychological examinations and medicines.

“All evacuees will receive a calm refuge,” the statement said. “Finally, these people will be able to feel safe.”

According to some estimates, about 100,000 people may still be trapped in the port city, with little access to food, water and utilities. Several hundred of them remained at a sprawling steel plant that is the last major holdout in the Russian-occupied city – along with nearly 500 wounded soldiers and an unknown number of dead bodies.

More than 100 women, children and the elderly were evacuated from the Azovstal plant Sunday before Russian shelling forced a temporary halt to the evacuation effort. The Russian military says 69 chose to be evacuated to Ukraine-controlled territories, while 57 others asked to stay in the areas under Russian control.

President Volodymyr Zelenskyy told Greek state television that civilians remaining in the plant were afraid to board buses because they believed they would be taken to Russia. He said he had U.N. assurances they would go to Ukraine-controlled areas.

►The Ukraine Finance Ministry says the country has received grant assistance of over $500 million from the World Bank’s Donor Trust Fund to spend on social, humanitarian, and healthcare needs.

►More than 1,202 bodies of Ukrainian civilians killed by Russian troops have been found in the Kyiv region, regional police Chief Andrii Niebytov said.

►Kristina Kvien, U.S. Embassy charge d’affaires, attended a news conference Monday in Lviv to highlight the return of U.S. diplomats to Ukraine. The U.S. pulled out of its Kyiv embassy for Lviv before the war, then left Ukraine entirely after the February invasion.

►Ukrainian authorities say Russian forces again have struck a strategic bridge in the country’s southwest Odesa region. The destruction cuts access to shipments of weapons and other cargo from neighboring Romania.

Does Putin have an endgame?

As the U.S. and its allies rush more cannons, tanks and ammunition to Ukraine, Russia’s already diminished military is still looking for victories to justify the huge cost of President Vladimir Putin’s invasion.

Putin is hoping to grab those gains in eastern Ukraine and parts of the Black Sea coastline. If successful, he could claim he’s met an initial objective of securing the Donbas, an area that has been contested by Ukrainians and Russian-backed separatists since 2014.

Calling the next few weeks pivotal, a senior Defense Department official said Russia will “have some real decisions to make” if they don’t have success in their new offensive.

Read more on how the war in Ukraine could end here.

Rep. Adam Kinzinger is introducing a joint resolution that would authorize President Joe Biden to use U.S. military force in Ukraine if Russia uses chemical, biological or nuclear weapons. The legislation authorizes the use of force, if necessary, to “protect the national security interests of the United States with respect to Ukraine and assist in defending and restoring the territorial integrity of Ukraine.” The authority would terminate when “the territorial integrity of Ukraine has been restored,” according to the resolution.

“Putin must be stopped,” the Illinois Republican, an Air Force veteran, said. “Accordingly, the commander in chief to the world’s greatest military should have the authority and means to take the necessary actions to do so.”

Russia committed over 120 battalion tactical groups, approximately 65% of its entire ground combat strength, to the war when it began in February – and more than a quarter of these units have been rendered “combat ineffective,” the British Defense Ministry said in an assessment Monday.

“Some of Russia’s most elite units, including the VDV Airborne Forces, have suffered the highest levels of attrition,” the assessment says. “It will probably take years for Russia to reconstitute these forces.”

Previous assessments have highlighted chronic shortcomings in Russian tactical coordination and issues with troop morale. But they also have noted modest gains by the Russian military.

To mixed reviews, Poland urges EU to halt use of Russian energy

Poland urged the European Union to impose restrictive sanctions on Russia’s oil and natural gas sectors and to refuse Russian demands to pay for gas in rubles. EU ministers are meeting in Brussels to discuss how to lessen dependence on Russian energy following Russia’s decision last week to cut gas supplies to Bulgaria and Poland. Energy giant Gazprom says the two countries failed to pay their bills in April.

An embargo, however, could damage European economies already made fragile by the war. Hungary opposes the ban, and Germany’s Economy Minister Robert Habeck has acknowledged  that not all other member states were on board. Polish Climate and Environment Minister Anna Moskwa was unyielding.

“We will call for immediate sanctions on Russian oil and gas,” she said. “This is the next, and urgent, and absolute step.”

Israel’s Foreign Affairs Ministry on Monday demanded an apology and summoned the Russian Ambassador for a “clarification meeting” after Russian Foreign Minister Sergey Lavrov made inflammatory statements about Nazis and the Jewish people.

“Well I think that Hitler also had Jewish origins, so it means nothing,” Lavrov said. “For a long time now we’ve been hearing the wise Jewish people say that the biggest anti-Semites are the Jews themselves.”

Minister of Foreign Affairs Yair Lapid described Lavrov’s remark as “both an unforgivable and outrageous statement as well as a terrible historical error. Jews did not murder themselves in the Holocaust. The lowest level of racism against Jews is to accuse Jews themselves of antisemitism.”

On Monday, May 9, Biden will meet with Slovakia government officials before returning to the United States.

Moscow won’t set artificial timeframes to complete its military operation in Ukraine by the Victory Day holiday on May 9, Russian Foreign Minister Sergey Lavrov told Italy’s Mediaset TV. Russia’s “special military operation” in Ukraine depends on the need to “mitigate risks for civilians and Russian troops,” Lavrov said. The Ukraine military claimed last month that Russian soldiers were being told that the war must end by that date.

Victory Day marks Germany’s formal surrender to Russia in 1945 and is celebrated with parades and other events paying homage to those who died and to the war’s survivors and veterans.

“Our troops won’t artificially base their activities on a specific date, including Victory Day,” Lavrov said. “We will solemnly celebrate May 9 the way we always do.”

Pelosi thanks Poland for heroic efforts to support Ukrainians

House Speaker Nancy Pelosi expressed gratitude to the Polish people Monday for their humanitarian aid and other support for Ukraine. Pelosi and a half dozen U.S. lawmakers met with Poland’s President Andrzej Duda and Polish lawmakers in Warsaw on Monday. The visit followed a weekend visit to Kyiv where they met with Ukrainian President Volodymyr Zelenskyy, pledging support until Russia is defeated. Pelosi called Duda “a valued partner.”

“Further informed and deeply moved by our experiences throughout our engagements in Poland, our delegation will return to Washington ready to continue our work until victory is won, and Ukraine has defended Democracy for their nation and the world,” Pelosi said in a statement.

Ukraine admits ‘Ghost of Kyiv’ fighter pilot is a myth

Ukrainian authorities over the weekend admitted that the fighter pilot dubbed the “Ghost of Kyiv,” whose single-handed conquests against Russian forces made the then-unnamed pilot the stuff of legends, is a myth.

“The Ghost of Kyiv is a superhero legend whose character was created by Ukrainians!” Ukraine’s air force said in Ukrainian on Facebook.

The statement came after published reports identified Maj. Stepan Tarabalka as the man behind the moniker. Tarabalka was a real pilot who died on March 13 during air combat and was posthumously awarded the title Hero of Ukraine, Ukraine’s air force said last month. But he was not the “Ghost of Kyiv,” the force said in Saturday’s statement.

“The information about the death of the Ghost of #Kyiv is incorrect,” Ukraine’s air force wrote in a separate post Saturday on Twitter. “The #GhostOfKyiv is alive, it embodies the collective spirit of the highly qualified pilots of the Tactical Aviation Brigade who are successfully defending #Kyiv and the region.”

Zelenskyy says Russia is fighting a war of ‘extermination’

Ukrainian President Volodymyr Zelenskyy accused Russia of trying to exterminate his people, pointing out Sunday in his nightly address that Russian shelling had hit food, grain and fertilizer warehouses, as well as residential neighborhoods in the Kharkiv, Donbas and other regions.

“The targets they choose prove once again that the war against Ukraine is a war of extermination for the Russian army,” Zelenskyy said, adding that Russia will gain nothing from the damage but will further isolate itself from the rest of the world.

“What could be Russia’s strategic success in this war?” Zelenskyy said. “Honestly, I do not know.”