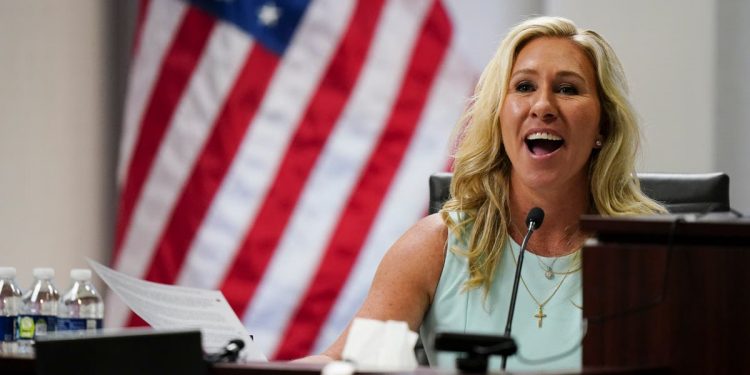 Marjorie Taylor Greene today faced an administrative judge at a hearing that could see the Georgia Republican banned from public office because of her alleged support for the 6 January insurrection at the US Capitol.

The congresswoman was questioned about the 2021 Capitol riot by lawyer Ron Fein, representing a group of voters who filed a challenge with the Georgia secretary of state’s office alleging that Ms Greene helped facilitate the attack that ultimately sought to upend Congress’ certification of Joe Biden’s presidential election victory.

They say that her behaviour violates a clause in the US Constitution’s 14th Amendment and makes her ineligible to run for reelection.

Among other things, the case against the congresswoman hinges on her repeated use of a “codeword” – specifically, repeated references to the year 1776 – which the lawyers say encouraged the rioters who descended on the Capitol.

For her part, Ms Greene is appealing a federal judge’s ruling allowing a challenge to her eligibility to run for reelection to proceed and in the hour leading up to her hearing, the pro-Trump lawmaker took to Twitter to urge her fellow Republicans to “protect election integrity”.

The hearing around Marjorie Taylor Greene’s eligibility to run for reelection could hinge around the use of one “codeword” she uttered ahead of the 6 January Capitol Riot, lawyers seeking to disqualify the Georgia Republican said.

“The day before the attack, she signaled to her followers a codeword that meant to storm federal buildings and supposedly overthrow tyrants,” Ron Fein, the attorney who will question Ms Greene, told MSNBC on Wednesday. “So, we are going to ask her about all of that and more.”

On 5 January 2021, while providing an interview with Newsmax, the congresswoman told interviewers that ”This is our 1776 moment”.

Lawyers representing the voters seeking to block the congresswoman from reelection say “1776” was a “codeword for violence.”

As Ms Greene spoke it, pro-Trump demonstrators were gathering in Washington, DC for the following day’s rallies, where they planned to protest the certification of Joe Biden’s election victory.

Continuing reading the full story from The Independent’s Nathan Place.

Speaking ahead of her hearing to Jenna Ellis, a former Trump attorney, Marjorie Taylor Greene took to calling out a group of people she’s now commonly linked to debasing: the media.

“It’s absurd what they are claiming and lying about,” the congresswoman said to Ms Ellis, just days before the hearing that could potentially see her lose her job.

Watch the clip of the Georgia Republican’s interview with Ms Ellis below.

ICYMI: Greene lashed out after judge green-lit lawsuit that would ban her from ballot

A federal judge earlier this week denied Marjorie Taylor Greene’s attempt to have the case against her thrown out, a ruling that the far-right congresswoman has categorically disagreed with.

“I have to go to court on Friday and actually be questioned about something I’ve never been charged with and something I was completely against,” the Georgia Republican complained following the judge’s ruling.

Ms Greene has maintained that she did not participate in or help plan the 6 January attack on the US Capitol, despite providing vocal support to those who have since been arrested and charged for their own involvement in the insurrection.

Speaking on Tucker Carlson’s nightly programme earlier this week, the pro-Trump Republican said the hearing was cooked up by “progressives” in a larger effort to keep her name off the ballot.

“They’ve hired up some attorneys from New York who hate the people in my district and don’t believe that they should have the right to elect who they want to send to Washington, which is me.”

Continue reading the full story from The Independent’s Andrew Naughtie.

Opinion: Greene is finally facing some consequences. Her insurrectionist friends might soon, too

Writing after US District Judge Amy Totenberg allowed the lawsuit against Marjorie Taylor Greene to go forward this week, opinion writer Noah Berlatsky discussed how Ms Greene’s hearing serves as evidence that there are consequences in the works for Republican lawmakers who denied the election results, even if its not coming directly from Congress.

Read the full opinion piece from Noah Berlatsky, writing for The Independent, here.

House Minority Leader Kevin McCarthy tweeted late Thursday night in a show of support for fellow Republican lawmaker Marjorie Taylor Greene ahead of her hearing on Friday that could see her blocked from seeking re-election in the 24 May Republican primary.

“American voters should determine who represents them in Congress, not well-funded political activists,” McCarthy wrote, before attempting to shame the lawyer leading Friday’s case against the Georgia Republican.

The only problem with McCarthy’s attack, as Mr Elias pointed out himself, is that he’s not involved in Rep Greene’s hearing.

“I haven’t filed any case against Greene, but I am clearly living rent free in your head,” the Democratic lawyer quote tweeted back to the GOP lawmaker.

Ron Fein, the attorney who will question Ms Greene on Friday, is the laywer who heads up the non-profit Free Speech for People, which represents a group of voters seeking to block Ms Greene from running for re-election.

Republican Congressman Madison Cawthorn, who faced a similar lawsuit to Marjorie Taylor Greene over his alleged role in supporting the Capitol attack, took to Twitter last night to throw his support behind the pro-Trump Republican ahead of her own hearing on Friday.

“The left is trying to remove patriots like @RepMTG and me from the ballot. We expect them to act like that,” the North Carolina Republican wrote.

A Trump-appointed judge, Richard E Myers II, blocked the lawsuit from proceeding earlier last month, which could’ve prevented Mr Cawthorn from running for re-election by labeling him an insurrectionist.

The North Carolina lawmaker then continued in his tweet to call out the Tennessee Republican Party, who voted on Tuesday to remove three congressional candidates from the primary ballot, including the Trump-backed candidate Morgan Ortagus, alongside Baxter Lee and Robby Starbuck.

“But to see Republicans do it to other Republicans is sickening. Back room deals should NOT decide this election- the people of Tennessee should!” he wrote.

Donald Trump will go to the mattresses for those who remain fiercely loyal to him, and Marjorie Taylor Greene can count herself among that chosen group.

On Thursday, one day ahead of Ms Greene’s hearing where she will face questions about her involvement in the 6 January Capitol Riot by a group of lawyers who hope to block the congresswoman from seeking re-election, Mr Trump issued a statement calling out his fellow Republicans for “allowing” this “horrible thing to happen” in the first place.

“The Governor of Georgia, Brian Kemp, and Secretary of State, Brad Raffensperger, perhaps in collusion with the Radical Left Democrats, have allowed a horrible thing to happen to a very popular Republican, Congresswoman Marjorie Taylor Greene,” Mr Trump wrote in a statement, later shared by his spokesperson, Liz Harrington, on her own Twitter account.

“She is going through hell in their attempt to unseat her, just more of an election mess in Georgia,” the statement continued, before listing off a series of false accusations about voter fraud and election tampering in the southern state.

“Unlike other Republicans, this Governor does everything possible to hurt the voting process in Georgia.”

Earlier this month, the former US leader endorsed first-term Rep Greene for re-election, labelling her “a warrior in Congress”.

“She doesn’t back down, she doesn’t give up, and she has ALWAYS been with ‘Trump,’” Mr Trump said in a statement through his Save America PAC.

Marjorie Taylor Greene took to Twitter early Friday morning ahead of testifying at an administrative hearing to urge her fellow Republicans to “protect election integrity”.

“Republicans must protect election integrity. It’s one of the most important issues in our country,” the pro-Trump Republican wrote just an hour before the case that will determine whether or not she is eligible to be included on the ballot in the midterm elections.

“When the People lose their right to vote & their freedom to choose their representatives, our country is lost. Only the People have the right to choose who they send to Congress.”

The hearing for Representative Marjorie Taylor Greene will begin at 9:30am ET, where the Georgia Republican will testify at an administrative hearing in Atlanta on a 14th Amendment challenge to her candidacy for re-election in Georgia’s 14th Congressional District.

Marjorie Taylor Greene arrived at the administrative hearing to a round of applause from supporters. 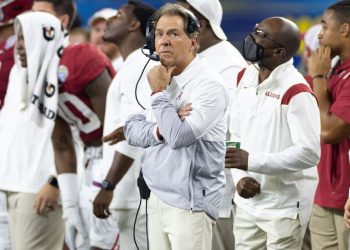 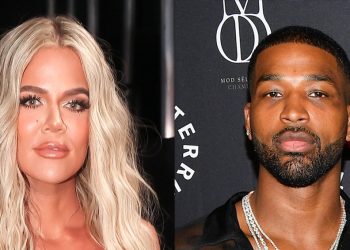 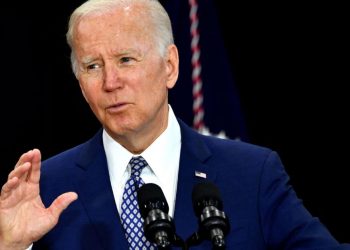 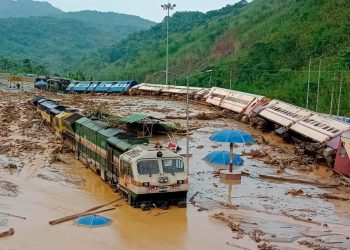