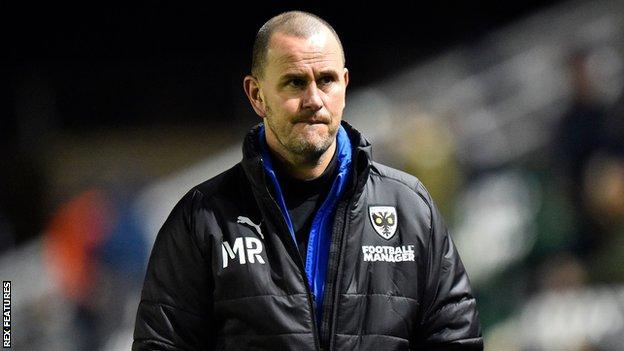 The Dons are in the bottom three, one point from safety, and fell to a fifth consecutive loss at home to Cambridge United on Saturday.

Robinson was appointed in February 2021 after working in various coaching roles at the club since 2004.

Wimbledon have only recorded six victories this season and Robinson leaves having won 18 of his 70 games.

A statement from the club said they would like to record their “gratitude to Mark for all his hard work, loyalty and commitment whilst in this role”.

They are yet to confirm who will take take charge of the next fixture, away to Sheffield Wednesday on Saturday.

AFC Wimbledon’s last victory was a 2-0 win over Accrington Stanley on 7 December. They have since drawn nine and lost 11 league matches, scoring just 12 goals, to tumble down the table into the relegation zone with seven matches to go.

Robinson was only the Dons’ fifth permanent manager since they were promoted to the English Football League in 2012.