A rebound in US tech stocks helped to power several London-listed funds higher after a torrid January.

Scottish Mortgage Investment Trust, which counts electric car groups Tesla and Nio as well as computer graphics card maker Nvidia among its major holdings, was one of the FTSE 100 gainers, rising 3.6 per cent, or 38.5p, to 1117.5p.

Other funds with large holdings in US tech giants also moved higher. FTSE 250-listed Allianz Technology Trust, which has large investments in Microsoft, Apple and Google parent Alphabet, was up 4.6 per cent, or 13p, at 299p. 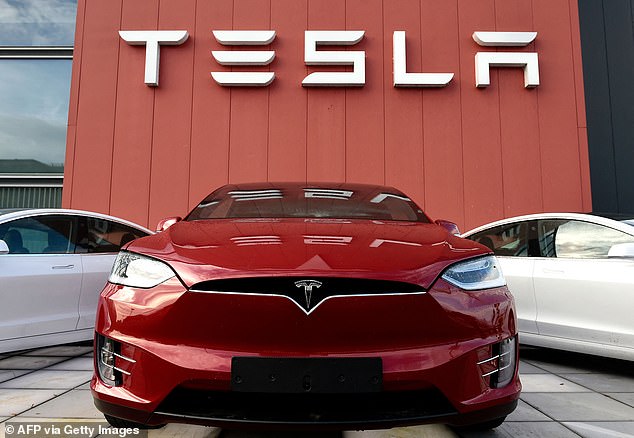 Meanwhile, Baillie Gifford US Growth Trust, which has stakes in Canadian shopping site Shopify as well as Amazon, Netflix and website hosting firm Cloudflare, climbed 2.4 per cent, or 5.5p, to 239.5p.

The gains came after the tech-heavy Nasdaq index on Wall Street had one of its best days since March, jumping around 3.4 per cent on Monday amid hopes of positive updates from Facebook-owner Meta, Amazon and Alphabet, all of which report this week.

The Nasdaq made further gains yesterday, rising 0.75 per cent, but remains 9 per cent lower than it was at the start of the year following last month’s sell-off. 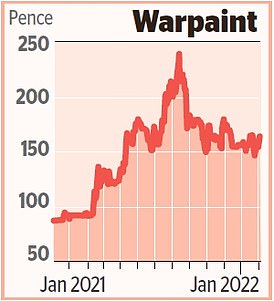 Make-up brand Warpaint London has emerged stronger than expected from the pandemic, with sales for 2021 ahead of the £49.3million of 2019, and better than previous predictions that the figure would be broadly similar.

As a result, profits for the year were expected to be around £6.6million, ahead of pre-pandemic levels and market expectations.

London tech stocks were a more mixed picture, with online grocer Ocado down 4.9 per cent, or 73p, to 1431p as it continued to fight a legal battle with Norwegian company Autostore.

Irn-Bru maker AG Barr fizzed 1 per cent, or 5p, higher to 500p as sales climbed back above pre-pandemic levels. It forecast revenues for the year to January 30 of around £267million, up 17.5 per cent year-on-year and ahead of the £255.7million reported in its last full year before Covid struck.

Profits for the period were expected to be ‘marginally ahead’ of its previous guidance.

Tonic maker Fevertree also bubbled up 4.3 per cent, or 91p, to 2224p after analysts at HSBC upgraded the stock to ‘buy’ from ‘hold’, saying they remained ‘optimistic on the long-term growing popularity of the brand’.

Cineworld slumped 4 per cent, or 1.58p, to 37.66p as it began talks with former shareholders of its US business Regal to delay payments to bolster its cash reserves.

The firm previously agreed to pay investors £126million after they became unhappy with the price of its takeover of Regal in 2017.

Music catalogue investor Hipgnosis slipped 1 per cent, or 1.2p, to 117p following reports it is under pressure from investors about its £111million investment in the back catalogue of musician Neil Young.

Concerns it could suffer a write-down surfaced after Young pulled his songs from the Spotify streaming platform in a row over podcaster Joe Rogan, who has been accused of promoting misinformation about Covid vaccines.