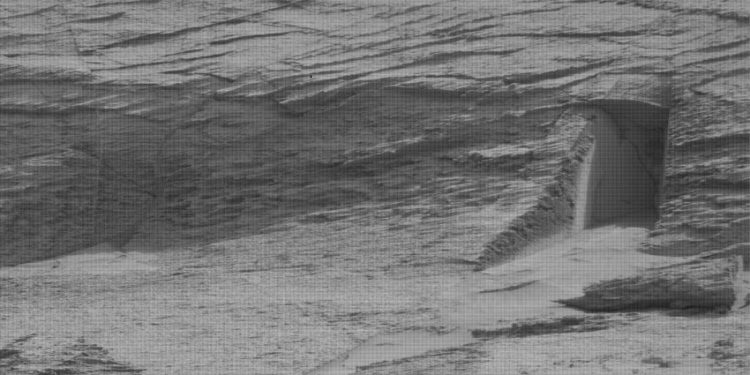 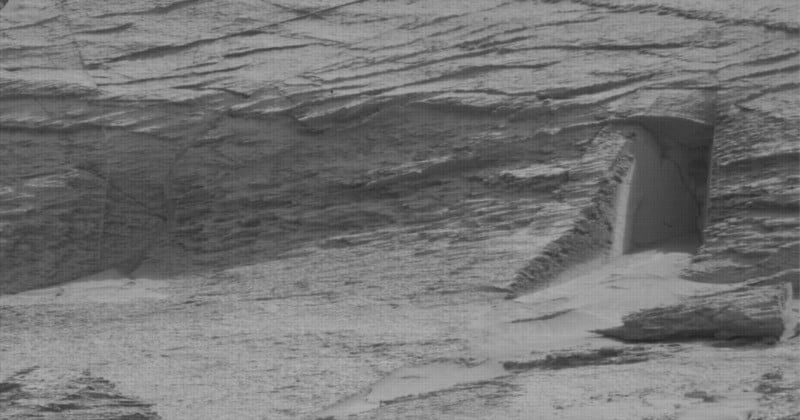 Last week, NASA’s Mars Curiosity rover captured a photo of what looks like a purposefully carved doorway that leads somewhere into the depths of the Red Planet.

The photo was captured by the Curiosity’s Mastcam on May 7 as the rover journeyed up Mount Sharp. As reported by Gizmodo, the grainy image has excited conspiracy theorists as the formation doesn’t look like a naturally occurring phenomenon but instead appears as though a doorway was purposefully carved into the side of the mountain.

But NASA scientists are tempering expectations.

“It’s just the space between two fractures in a rock,” Ashwin Vasavada, a project scientist in the Mars Science Laboratory, tells Gizmodo.

“We’ve been traversing through an area that has formed from ancient sand dunes. The fractures we see in this area are generally vertical. I think what we have here [is] either two vertical fractures, where the middle piece has been removed, or one vertical fracture, and the blocks have moved apart a little bit.”

According to experts, what is likely happening here is the human brain’s tendency to see familiar shapes when looking at unfamiliar environments. Gizmodo points out that both a squirrel and a spoon were thought to have been seen on Mars as well. It isn’t just limited to the Red Planet either.

In December, China’s Yutu 2 lunar rover captured a photo of what was described as a “mystery hut” on the far side of the moon, and Chinese scientists were eager to inspect what at first appeared to be signs of extraterrestrial life.

“Suddenly, an obtrusive cube on the northern skyline attracted their attention,” the scientists said at the time. “This object pierced through the winding of the skyline, like a ‘mysterious hut’ that appeared out of thin air.

But after closer investigation, which took more than two days for the rover to traverse, it turned out that the shape was just a trick of the camera, lighting, and perspective as the “hut” was revealed to be just a rock.

Skeptics aren’t convinced, and many argue that nature doesn’t tend to make straight lines like those seen in Curiosity’s photo, despite multiple examples to the contrary.