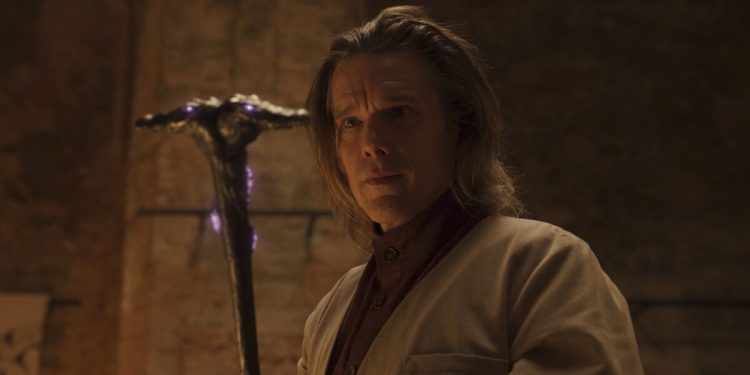 Arthur Harrow wants his followers to speak three languages. He might want to find a new Mandarin teacher first.

The “Moon Knight” villain (played by Ethan Hawke) has a brief conversation in Mandarin with one of his followers in the second episode of the Marvel Studios series, and viewers familiar with Mandarin are criticizing the scene for butchering the language and calling it “gibberish” on social media.

Even Marvel Cinematic Universe actor Simu Liu, who starred in “Shang-Chi and the Legend of the Ten Rings,” took to Twitter to comment on the scene, tweeting “Arthur Harrow needs to fire his Mandarin teacher.”

During the lead-up to the controversial exchange, Harrow is trying to appeal to Steven Grant (Oscar Isaac) to further his seemingly nefarious plans. While introducing Steven to his community of followers, a girl kicks a soccer ball toward him and she and Harrow briefly converse in Mandarin.

The exchange is not subtitled, and the closed captioning only says they are “speaking in Mandarin,” so there is no translation provided for non-Mandarin speakers.

As clips of the scene circulated on Twitter, numerous viewers said they felt insulted or that the scene made them cringe. Some insisted there was no actual Mandarin spoken in the scene, while others concluded that the lines were poorly translated before they were delivered by the actors.

Among those responding to the scene are MCU fans who believe the mangled Mandarin is intentional, either to undermine Harrow’s community or as part of a twist that “Moon Knight” has yet to reveal. That Steven’s English accent is intentionally “weird” could support these theories.

Marvel has not responded to a request for comment.

Mandarin has a reputation for being a difficult language to learn for native English speakers, particularly because of its tones. But pronunciation aside, the lack of subtitles makes “Moon Knight’s” treatment of Mandarin appear particularly careless — a prop language, of sorts, that the creative forces behind the series didn’t bother to get right.

Other non-English languages have also been spoken in “Moon Knight.” The first episode includes a scene where Harrow issues a command in what the closed caption describes as ancient Egyptian. Earlier in Episode 2, Steven recites a poem in French and the closed captions also indicate only that he is speaking in French. Neither scene include any subtitles for the non-English lines.

The only non-English language to get subtitles in “Moon Knight” so far is the Arabic in Episode 3, which premieres Wednesday, presumably because these lines contain details that are important for the story.

“Moon Knight” is not the first time that an MCU title has been called out for mutilating an Asian language. In “Avengers: Endgame” (2019), Ronin/Hawkeye (Jeremy Renner) speaks atrocious Japanese when fighting gangsters in Tokyo. But the scene was subtitled, and he was opposite Japanese actor Hiroyuki Sanada. “Black Panther” (2018) saw T’Challa (Chadwick Boseman), Okoye (Danai Gurira) and Nakia (Lupita Nyong’o) head to Busan in South Korea. Viewers were more critical of the Korean spoken by those meant to be Korean characters than Nakia’s mastery of the language, and those conversations were also subtitled.

“Endgame” and “Black Panther” preceded “Shang-Chi,” which was a milestone for Chinese and Chinese American representation in the MCU and served as a rebuke of the long history of stereotypes and tropes perpetuated by both Marvel specifically (see: the Ancient One, the Mandarin, Iron Fist, etc.) and Hollywood in general.

Whether or not the Mandarin passage can be “explained” by later revelations in narrative, though, the scene perpetuates stereotypes about Asians and Asian languages: Asian Americans have historically been mocked and taunted with racist “Asian-sounding” gibberish. Such a misstep is especially glaring now, at a time of heightened awareness about the connection between racist rhetoric and anti-Asian violence, and for a series that in other ways takes authentic representation seriously.

Driven Out By High Costs, Americans Are Still Relocating At A Record Pace