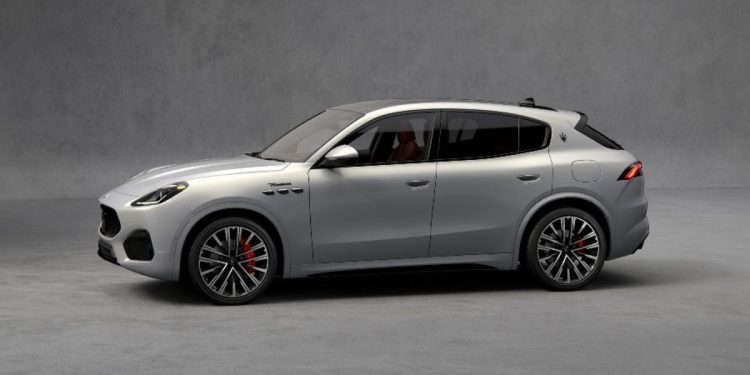 
The most powerful version of the Grecale, badged Trofeo, has a twin-turbocharged 3.0-liter V-6 engine based on the Nettuno engine used on Maserati’s MC20 sports car. It has 523 hp and peak torque of 457 pound-feet. Cylinder deactivation is used to reduce fuel consumption.

The SUV will also be offered with a choice of two 2.0-liter, four-cylinder mild-hybrids with 296 hp on the GT version and with 325 hp on the Modena version. The mild-hybrid engines use a 48-volt battery, a belt-starter generator and an e-booster.

All three versions of the Grecale are four-wheel drive.

The Modena and Trofeo version have a rear wheel track widened by 34 mm compared to the GT model, to accentuate their sporty character.

The interior has a classic instrument cluster with a central 12.3-inch panel plus a smaller 8.8-inch comfort panel. Most functions are operated by touch control.

The battery-electric version, called the Grecale Folgore, will feature a 105-kilowatt-hour battery.

Maserati said this month it will launch only battery-electric vehicles from 2024 while continuing to sell existing combustion engine variants. By 2030, it aims to sell only full-electric vehicles.

Next year Maserati will launch the GranTurismo coupe and GranCabrio convertible with full-electric and gasoline drivetrains.

By 2025, Maserati will unveil successors to the Quattroporte large sedan and Levante large SUV. Both will come as EVs only.  A full-electric version of the MC20 will also be launched by 2025.

The Grecale was due to be launched in 2021 but Stellantis CEO Carlos Tavares delayed the program.

Tavares told Automotive News Europe that he postponed the launch “to make sure it is absolutely where it should be in terms of fit and finish, electronics and infotainment.”