Masked Singer fans react to Rudy Giuliani unmasking and Ken Jeong’s walk out: ‘I can’t believe this was aired’ – The Independent 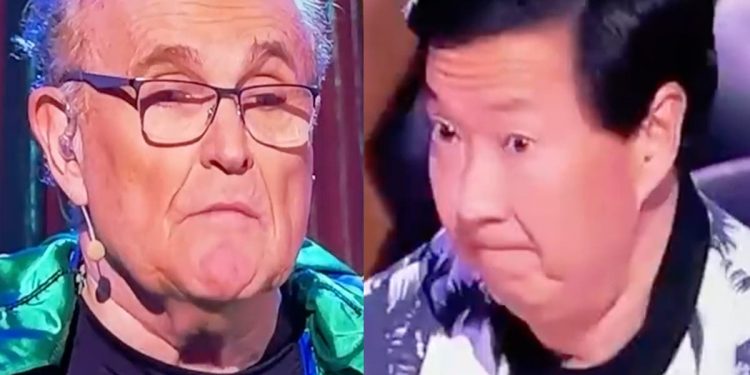 Fans have reacted to Rudy Giuliani being revealed on The Masked Singer US – and judge Ken Jeong’s subsequent walk-off.

The former New York city mayor and Donald Trump advisor was revealed to be the man behind the Jack in the Box mask on Wednesday night’s (20 April) episode of the hit singing contest.

Jack in the Box was voted off in a single round elimination after his one and only performance of “Bad to the Bone” by George Thorogood & the Destroyers.

McCarthy and Scherzinger remained on stage bantering with the former politician.

The Hangover star, however, stood in silence with his arms crossed.  As the credits rolled, Jeong was heard saying “I’m done” before walking off stage.

Giulian’s unmasking comes amid earlier reports that he appeared on the series following the taping of the episode.

The reports sparked backlash from viewers who criticised the show’s decision to bring him on as a guest.

Fans were shocked to see that the episode was aired despite the negative reaction to the earlier reports.

A third viewer wrote: “I can’t believe they actually aired that crap.”

“Wow I can’t believe they actually aired it. And of course those bobble heads didn’t see anything wrong,” said someone else.

“Ken Jeong walks out, Robin Thicke is pissed & Jenny/Nicole are dancing to him,” wrote another person. “I can’t believe they aired this.”

Giuliani has become a highly polarising figure for defending the “big lie” or Donald Trump’s claims that the 2020 US presidential election was stolen from him.

The Independent has reached out to Fox for comment.

The Masked Singer previously drew similar criticism in 2020 after Republican politician Sarah Palin was unveiled as “The Bear”.

Keep up-to-date with the latest news by signing up to our US morning headlines newsletter here. See our full range of newsletters here.