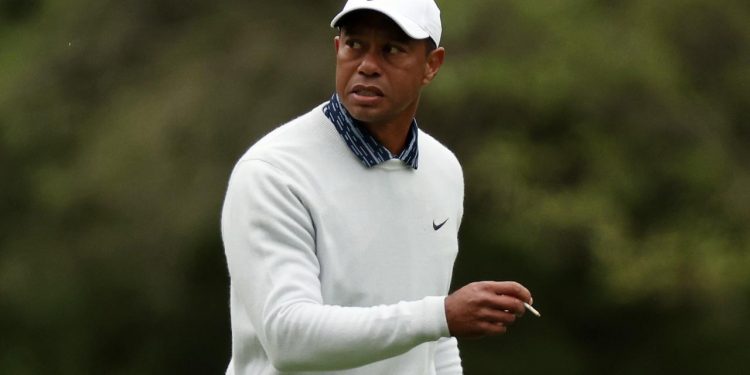 World No. 1 Scottie Scheffler is making all the running at Augusta. Can anyone catch him on ‘moving day?’ Follow all the day three action live.

In cold and windy conditions – prompting Collin Morikawa to don a face mask – the chasing pack is clinging on to runaway leader Scottie Scheffler.

Woods made double bogey at the 5th hole to fall 11 shots behind the world No. 1 American, who entered ‘moving day’ five strokes clear of the field.

Only one player in Masters history (Harry Cooper in 1936) has coughed up a 5 stroke lead at the halfway mark to lose at Augusta.

REST OF THE AUSSIES

Adam Scott, who narrowly avoided the cut on Thursday, carded a disastrous 80, falling to 12-over.

Scott’s 8-over round matched his previous worst performance at Augusta 18 years ago.

“I certainly made it look difficult. I think the pin spots are not that easy again today,” Scott said.

“It was pretty fresh out there. It’s like yesterday, but the ball’s going a fair bit shorter because it’s cold. So it’s just making the course play as long as it possibly can.”

Rookie Cameron Davis dropped seven more shots in a round of 79 and is 11-over for the tournament.

“There’s not many other words for it other than just really tough,” Davis said.

“You’ve just got to play such good golf around this place just to keep the ball on the greens let alone in the right spots. My game was a little bit off today, and the wind kind of made it worse and worse for me really. I just couldn’t get anything going.

“Every time I did make a good swing, I felt like I misread the wind and it did something crazy up in the air. While you’re back in the fairway just thinking what am I supposed to do?

“I’m a lot happier today standing here than I was the last two afternoons after missing a lot of putts,” Leishman said.

“Probably 2-over would be a pretty decent score today … anything better than that is going to probably pick up spots.”

Of the icy conditions, Leishman said: “I’ve got five layers on.”

Despite Scheffler’s lead, Leishman said the tournament was not over.

“It might be over for me, but no, certainly not over yet. I mean, I’ve been playing well here before, and you feel like you’ve — you’ve got it, and you know how to play this place, and then you shoot a 78,” he said.

“I’m not saying that’s what he’s going to do, but there’s pressure. It’s the Masters.

“He’s been playing great golf, but no, it’s certainly not over. Five shots can go — could be not leading standing on the 4th tee, 5th tee.

“There’s holes out there that are crazy quick,” Lee said.

SHOW ME THE MONEY

The US Masters winner will take home a lazy $3.63 million.

Tournament chiefs have announced the 91-man playing field will share a $20.15m purse.

The total purse when Tiger Woods won his first Masters a quarter of a century ago in 1997 was $3.6m.

But five-winner Woods doesn’t need the money. Forbes magazine this week estimated the 15-time major winner had earned $2.3 billion before taxes and agent fees across his 26-year professional career.

A ticket to the weekend action at Augusta goes for about $2000.

Originally published as Masters 2022: Stay up to date with the latest news from day 3 at Augusta

Why the births of millions of African children are not registered

Why the births of millions of African children are not registered