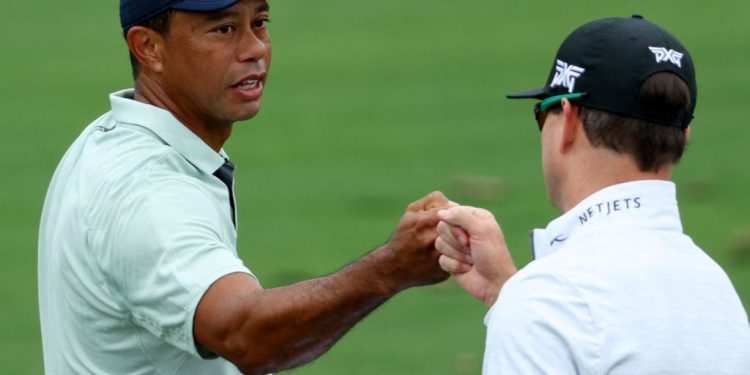 If golf’s reverence for Augusta National borders on religious fanaticism, it still paled in comparison to the pilgrimage of those walking its grounds on Monday afternoon. The disciples shuffled behind in rows fifteen deep, a mass of luminous polo shirts blurring as they jostled for position, despite the fact they would never get near enough to catch a glimpse.

There is an argument that Tiger Woods’ aura only grew stronger in his absence. Despite the emergence of a new generation, ever since the near-fatal car crash fourteen months ago that left Woods in a hospital bed for three months, nothing has been able to stop the sense of myth and yearning surrounding his comeback. From behind the veil of secrecy that was cast over his 75mph descent into a roadside ditch, the narrative slowly started to build again last year, beginning with leaked footage of him walking unaided before a short video of him hitting balls on the range last December sent fans into a frenzy. In public, Woods played down expectations but word spread between fellow pros in private and spilt into the press that Woods was back and a return was not beyond his reach. “If anyone can do it, Tiger can.”

Even Brooks Koepka, who’s effectively carved out a reputation as golf’s most indifferent champion, couldn’t help but be drawn into uttering that same phrase. It is hard to imagine any other sport where one figure is viewed in such a divine light, regardless of how many shades of injury and moral impropriety have impinged on its success. In fact, it is quite the opposite. Woods’ flaws seem only to have served to enhance his legend.

And so after months of suspense, there he was, so close that the fans who’d queued up at the earliest hour to gain entry to Augusta could almost reach out across the fairway rope and touch him. Players didn’t so much as worship the ground Woods walked on during his two practice rounds as cite the course’s steep climbs as another obstacle to be trampled. Never one to leave any corner of drama unfulfilled, Woods insisted he would make a “game-time decision” on his participation. At a press conference on Tuesday, he not only eradicated any last semblances of doubt but rewrote the script with a typically bullish sense of conviction.

And with that, the alternative storylines leading into this Masters have all been smudged into the margins. From Rory McIlroy’s damned pursuit of a career grand slam to Bryson DeChambeau’s gunslinging, Scottie Scheffler’s ascent to world No 1 to Hideki Matsuyama’s menu and the state of Sandy Lyle’s suspenders, nothing can escape the vast shadow of Woods’ presence. It is golf’s gift and curse, although nobody can claim to be poorer because of it.

“I would say having Tiger anywhere deflects a lot of attention from any of us,” Scheffler said this week, having won three of his last five events to knock Jon Rahm off the top of the world rankings. “It’s definitely easier to fly under the radar.”

Even for those most devout, few expect Woods to mount a serious challenge come Sunday. Ahead of the Masters in 2019, when he defied the realms of reason again to claim a fifth Green Jacket, Woods had played five events in the build-up to Augusta and hadn’t finished outside the top-30. This time, Thursday will mark his first competitive appearance in almost 18 months, since he defended his title at the delayed autumn edition of the Masters in 2020. Even for Lazarus himself, it would surely be an impossible revival.

The trouble is, Woods has never met a miracle he didn’t think possible to enact. His hero status was supposed to be beyond redemption when his infidelities were revealed back in 2009 but still remains intact. His body was supposed to be broken beyond repair after spinal fusion surgery in 2017. Then there was the mugshot plastered across front pages when Woods was found asleep at the wheel later that same year, preceding the horrific crash last February that left the world reeling and Woods reckoning with his mortality like never before.

Ever since his breathtaking victory at Augusta in 1997 when he streaked to victory by 12 shots, Woods’ career has been defined by stretching the boundaries of what has been assumed possible. It is why his aura remains not just undimmed but stands virtually deified all these years later. When he tees off on Thursday morning, they will be packed around the first tee by the thousand. Televisions around the world will broadcast that one moment, regardless of what is to follow. Because if Augusta is the most hallowed ground in golf, Woods is still the man who can part the crowd like a sea everywhere he goes.

Supermassive Games Releases First 30 Minutes Of Gameplay From The Quarry

Supermassive Games Releases First 30 Minutes Of Gameplay From The Quarry