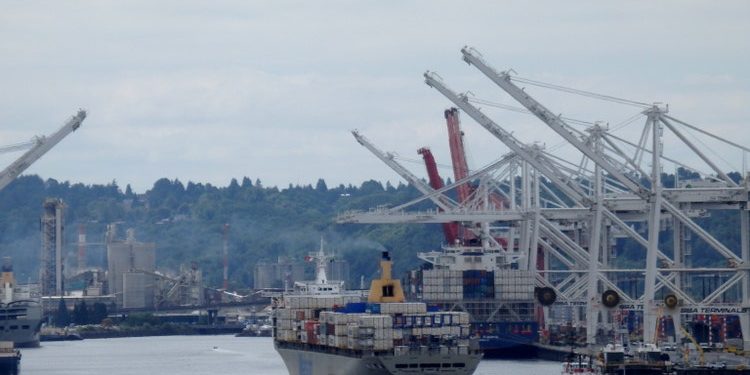 
If we look at a technical chart of Matson (US Marine Shipping Firm) (NYSE: MATX), we can see that shares have lost close to 30% of their value over the past two weeks alone and look very oversold. Given that the sizable pullback did not come as a result of a core binary event such as a company earnings announcement, irrational fear may be at play here in Matson. Suffice it to say, given Matson’s present market cap of $3.5+ billion, what investors should really be asking themselves is whether market conditions justified a $1.5 billion haircut in the company’s market cap over the past two weeks.

Furthermore, given the company’s strong profitability profile and low valuation, we would be banking on Matson’s bullish trend of higher lows and higher highs eventually continuing here. In fact, shares could drop to the stock’s 50-week moving average of just under $83, and the stock’s long-term bullish trend would still remain intact. This means that the importance of having one’s investment aligned with the direction of the principal trend can never be overstated. In fact, when we combine Matson’s trailing return on total capital of 30% (profitability) with its forward GAAP earnings multiple of 3.31, (valuation) this is a potent recipè for a swift turnaround here in the share price.

Another critical factor is Matson’s financial condition, as strength in this department ensures sustained investment can continue over the long haul. Therefore, since Matson’s shares have returned over 175% over the past five years, let’s go through the company’s balance sheet and monitor some of its key metrics to see if we can gain insights into where Matson is headed from a financial perspective.

The balance sheet kicks off with Cash & Cash Equivalents which for Matson came in at $282 million at the end of fiscal 2021. This asset is important as it enables the company rewards its shareholders through buybacks and dividend payments. Furthermore, cash can be used to bring down leverage as well as obviously invest in the company which we can see below. Cash & Cash Equivalents only amounted to a mere $20 million in fiscal 2017. Moreover, annual bottom-line earnings are expected to grow by 21%+ on sales growth of almost 10% in fiscal 22, so off to an encouraging start here.

Having the cash to invest aggressively for strong returns is one thing but protecting liquidity is a whole other area. No matter how well a company’s fundamentals may stack up in a given moment in time, having the wherewithal to always pay back short-term liabilities is crucial. Matson’s current assets came in at $705 million in fiscal 2021, and current liabilities arrived at $612 million. This gives Matson a current ratio of 1.15, which is actually the highest liquidity ratio since fiscal 2014. This trend speaks to good stewardship on management’s part, considering the strong increase in profitability, for example, over the past five years (63% earnings per share average annual 5-Year growth rate).

Matson’s net property, plant & equipment has more than doubled over the past five years, going from $1.166 billion in fiscal 2017 to $2.313 billion at the end of fiscal 2021. We see practically the same growth rate in Matson’s sales during this timeframe and earnings are up many multiples of this. Suffice it to say, in this industry where new equipment and maintenance are par for the course, it is encouraging to see Matson’s assets returning far higher profitability currently over yesteryear.

Goodwill is the “fat” paid over book value in previous acquisitions and intangible assets represent assets such as trademarks, copyrights, patents, etc. Both line items amounted to $509 million at the end of fiscal 2021. From an investor’s standpoint, we prefer when these line items do not make up a big percentage of the company’s assets (As they normally are the first to be written down) and when there is no negative trend in place. At present, these line items make up just under 14% of Matson’s assets and they have been more or less maintaining their full value year-over-year.

At the end of fiscal 2021, Matson reported $65 million of short-term debt and $550 million of long-term debt. In general, investing in companies with high levels of short-term debt is a risky venture, especially if the cash flow is not there to meet it. Given though that Matson generated almost $1 billion in operating cash flow last year, this short-term should not be a problem for the company. Once more, the encouraging trend here is the $131 million of debt, which was retired during fiscal 2021. This means the company has now a net debt balance of $346 million and a debt-to-equity ratio of 0.51, which is well up from the 1.22 ratio in fiscal 2017.

Shareholder equity in Matson came in at $1.66 billion at the end of fiscal 2021, which is a 146% increase over the same metric in fiscal 2017. Although many external conditions remains outside management’s control, growing the company’s book value as well as buying back company stock remain 100% within its control and here is where we see strong execution from management. Furthermore, although book value has grown at a slightly slower growth rate than the actual share price, we must remember that Matson’s ROE at present comes in at 70% versus 40% at the end of fiscal 2017.

When we look at Matson’s balance sheet as a whole, we see growing equity, reducing debt levels, and a willingness from management to keep on rewarding shareholders through sustained share buybacks. Matson’s strong financial base should result in strategic uses of its cash going forward. We look forward to continued coverage.

Hornets have thrived with PJ Washington ahead of Hawks game