Matt Damon hopes’ Jennifer Lopez and Ben Affleck are back together 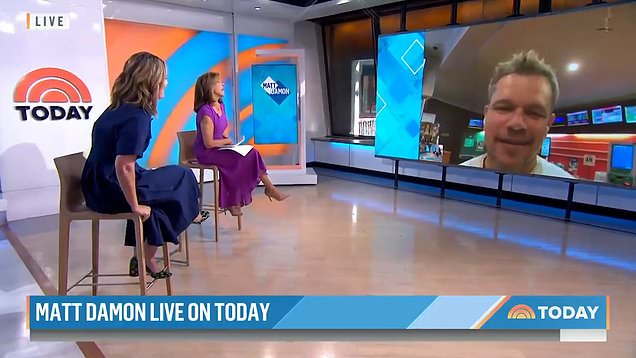 Matt Damon has spoken for all of us, when he said he ‘hopes’ Jennifer Lopez and Ben Affleck are back together.

We always knew he was a man of the people.

The internet has gone wild this week, after it was reported that, 17 years after their split, Bennifer is back on.

While they have been pictured hanging out following JLo’s split from Alex Rodriguez, neither of them have confirmed it.

Asked about the rumours on TODAY, Matt expertly side-stepped the question, saying: ‘There’s not enough liquor in the world for you to get me to say something about that.’

‘This is the first time I’ve heard about it,’ the 50-year-old insisted, before declaring: ‘It’s a fascinating story!’ when asked what he thinks.

However, it seems they’re enjoying each other’s company again, as photos have emerged of the pair driving around Montana where they are said to have flown to alone.

In the images obtained by the Mail Online, Jennifer is seen sitting next to Ben in the car before boarding a private jet and heading back to Los Angeles last weekend.

A source told People of their reunion: ‘[Jennifer] spent several days with Ben out of town. They have a strong connection. It’s all been quick and intense, but Jennifer is happy.’

Although there’s speculation around the nature of their relationship, another insider insists they’re just friends.

They told E! News: ‘They have been in touch here and there throughout the years.

‘Ben reached out to her to see how she was doing and they had dinner together a few times within this last month. It’s natural between them and the chemistry is unreal. They picked up where they last left off and are enjoying each other’s company right now.’

It was first revealed that Ben and Jennifer were back in contact again last month, when the Batman actor was spotted visiting her at her California home.

Jennifer shares two children with her ex-husband Marc Anthony, who she married in 2004, following her split from Ben.

Meanwhile, Ben shares three children with Jennifer Garner, who he married in 2005.

Metro.co.uk has contacted reps for Jennifer Lopez and Ben Affleck for comment.

Got a story? If you’ve got a celebrity story, video or pictures get in touch with the Metro.co.uk entertainment team by emailing us celebtips@metro.co.uk, calling 020 3615 2145 or by visiting our Submit Stuff page – we’d love to hear from you.


MORE : Kevin Smith wants you all to know he came up with ‘Bennifer’ as Ben Affleck and Jennifer Lopez ‘enjoy intense reunion’


MORE : Jennifer Lopez and Ben Affleck enjoying ‘intense’ reunion as they jet off to Montana for getaway

Final Fantasy 9 Is Getting An Animated TV Series

How to find bargains on June 22nd!