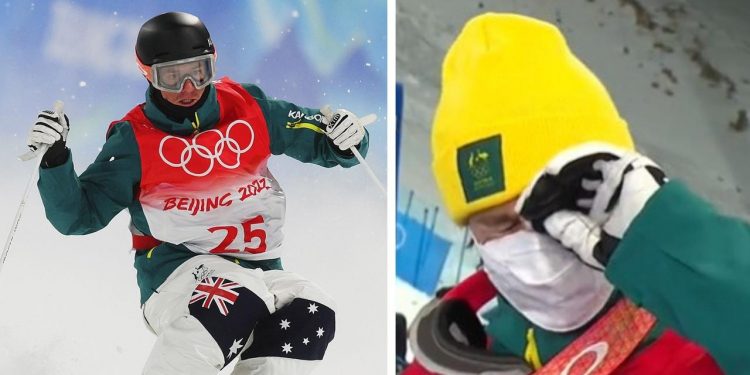 
2018 Winter Olympic moguls silver medallist Matt Graham has said he “felt a little bit embarrassed” after missing out on the 2022 Olympic finals but mate, you have nothing to be embarrassed about.

The 27-year-old from NSW’s Central Coast came into the Olympics with the worst possible lead in when he broke his collarbone in December during a World Cup event in Sweden.

Remarkably, he was training just weeks later, desperate to not miss his third Olympic Games.

Graham was one of the stories of the 2018 PyeongChang Olympics when he claimed the silver medal, one of only three medals alongside Jarryd Hughes’ snowboard cross silver and Scotty James’ snowboard half-pipe bronze.

But his dream of a shock comeback from the brutal injury has fallen apart in Beijing as he missed out on qualification for the finals.

After a DNF in his first effort earlier in the week, Graham had one chance to get into the finals on Saturday night.

After a wobble on the first jump, he had a sloppy middle section as he bounced high on the moguls and struggled to stay upright.

At the bottom of the mountain, he looked distraught before getting the score.

When the score came through, the 27-year-old looked on the verge of tears as he threw his skis down and waved sadly at the camera.

“It’s tough to describe,” he began. “This hurts a hell of a lot more than the collarbone did, I’m not going to lie. Put in so much work over the last however many years.”

Graham said the collarbone didn’t hold him back

“With my entry, how I was skiing here, I had a lot to give tonight,” he said. “Obviously not doing well a couple of nights a go put a bit more pressure on tonight but I felt like I was handling it really well.

“And then just kind of missed the takeoff on the top jump, landed a little left. It is tough conditions out here, it’s quite windy. I felt like I got bit of a tailwind which really accelerates you and then a couple of bad turns, that was it. I don’t really know what to say.”

His sister Eliza Graham is the team’s physio and he said she gave him a big hug at the bottom of the mountain.

But so raw in his emotions, he said “I wish I could’ve done better than this.”

As for everyone at home, Graham thanked his friends and family who had been there from the beginning.

“My family, my friends, you guys have been there from day one and been with me through the ups and the downs,” he said. “Obviously this is my biggest down I think I’ve ever felt.

“From four years ago, having such elation and such satisfaction after that result, I really wanted to chase that dream again tonight and … god, this is really hard. I’ve had a few broken bones in my life, they hurt a hell of a lot less than this.

“I don’t know, feeling a little bit embarrassed, I’m so much better than that. Yeah. I guess I’ll just suck it up. It is going to take me some time but right now I’m really happy for Cooper and Brody. They skied really well that round, gave got a lot to give tonight I think.

“I will try and push this aside and support them as best I can and then, yeah, be out here tomorrow for the girls.”

Social media was quick to react to the emotional interview.

From there, he turned around and was embraced once again by his sister.

Two Aussies made it through to the final however as Brodie Summers finished second and debutant Cooper Woods-Topalovic was fourth and will go through the to finals.

James Matheson also missed out and revealed he was going to retire.

Spend £149 on an advanced driving course – and save money

Spend £149 on an advanced driving course - and save money