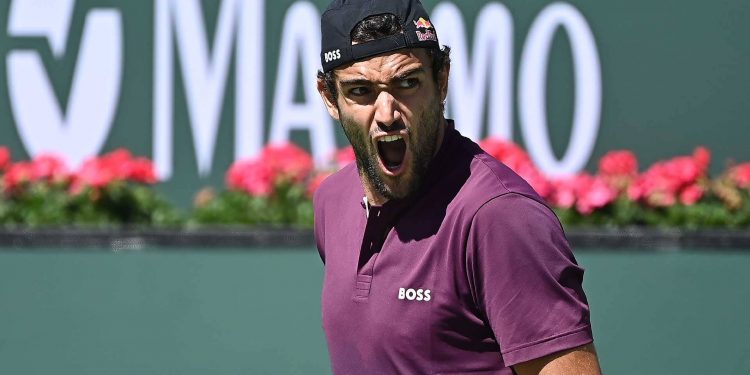 
Sixth seed Matteo Berrettini survived a mid-match dip to reach the fourth round at the BNP Paribas Open for the first time Tuesday, moving past Lloyd Harris 6-4, 7-5 in Indian Wells.

The Italian, who is making his fourth appearance in the California desert, showed his fighting spirit against Harris in a heavy-hitting display on Stadium 2.

Berrettini rallied from 2-5 in the second set and saved three set points, including one on the South African’s serve, before he raised his intensity and power to advance after one hour and 32 minutes.

“It means a lot [to reach the fourth round],” Berrettini said in his on-court interview. “I like the conditions but for some reason, I have never been able to play my best tennis here. I am happy with my performance, Lloyd is a tough opponent. It feels really nice to reach the fourth round for the first time. Every year I am improving.”

The 25-year-old reeled off five straight games to seal his victory, improving to 2-0 against Harris in their ATP Head2Head series. Berrettini will next face Miomir Kecmanovic after the World No. 61 defeated Dutchman Botic van de Zandschulp 7-6(3), 7-5.

“I got a little bit nervous,” Berrettini added. “I didn’t like how I handled the start of the second set. I let the anger out a little bit, which helped. I found the right balance in order to break him in the important moment and I then had the momentum.”

Berrettini has captured five tour-level titles, but has yet to crack the code at an ATP Masters 1000 event, with his best performance at this level coming in Madrid in 2021, when he enjoyed a run to the championship match.

The World No. 6, who advanced to the semi-finals at the Australian Open in January, edged #NextGenATP Dane Holger Rune in three sets in his first match in Indian Wells and is competing in his fifth tour-level tournament of the season.

In a tight first set, Berrettini looked to step inside the baseline and outmanouevre Harris with his brutal groundstrokes. The Italian showcased good footwork to control play on his forehand and gained the crucial break at 4-4, before he sealed the set with his seventh ace of the opener.

However, Harris responded in the second set, earning an early break in the fourth game as he hit with greater depth and consistency to cause Berrettini problems. But from 5-2 ahead, he failed to serve out the set, with Berrettini winning five games in a row to claim his win.

Harris was attempting to reach the fourth round at a Masters 1000 for the first time in his career. The 25-year-old also fell at the third-round stage in Indian Wells last season, losing to Norwegian Casper Ruud.