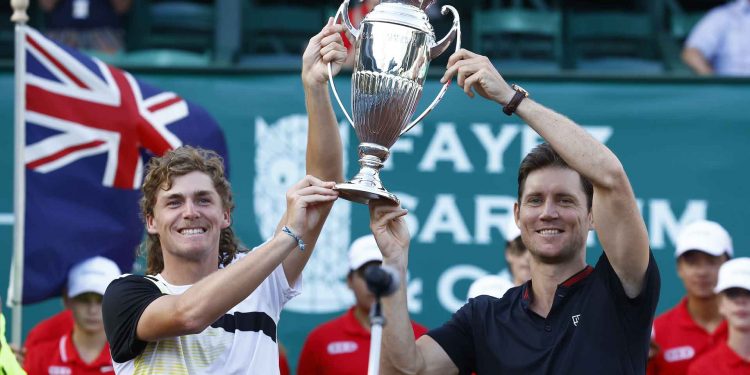 
Top-seeded Australians Matthew Ebden and Max Purcell captured their first ATP Tour title as a team in their fourth tournament as a duo in Houston. After reaching the Australian Open final in January, they charged to the trophy at the Fayez Sarofim & Co. U.S. Clay Court Championship without dropping a set in four matches.

In Saturday’s final, they defeated twin Serbian brothers Ivan Sabanov and Matej Sabanov, 6-3, 6-3, to cap a dominant week in which they lost just 21 total games across eight sets.

“I had so much fun during the week. We were pretty clinical,” said Ebden, playing just his second tournament since the birth of his first child, Harvey, in mid-February. “I feel lucky to say that but we were able to get through in straight sets in all our matches, pretty rare in this shootout format.

“We’re super happy, super excited. We came to Houston early, we put in a lot of training days, got really used to the courts and conditions and really enjoyed our time here. I think that paid off in the end. To get the title, we’re really happy with that.”

The Aussies broke serve four times in 10 chances in the final, and faced just one break point.

Ebden and Purcell are the first Australians to win the Houston title since Pat Cash and Patrick Rafter in 1996. It was the fifth career ATP Tour title for the 34-year-old Ebden and the first for the 24-year-old Purcell.