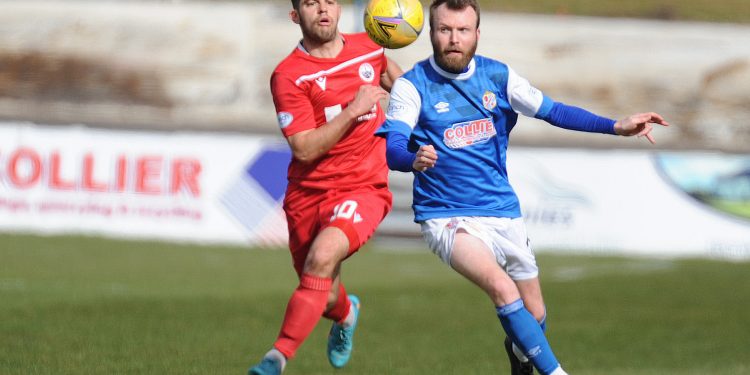 COWDENBEATH boss Maurice Ross wants his players to stand up and be counted as the club prepares for its third League 2 relegation play-off test in five years.

The club eclipsed Lowland League side East Kilbride in 2017 and Highland League team Cove Rangers a year later to stay in the SPFL, and now it looks certain that they will play either Bonnyrigg Rose, Fraserburgh or Buckie Thistle in 2022.

But the manager wants a who lot better set of performances in the run-up to the play-off games in May, than he saw in Saturday’s goalless draw with Stirling Albion.

The frustrated boss said after the game: “The first-half show against Albion was totally unacceptable.

“It was as if some of the team thought that they don’t have to work hard until the two play-off ties, with the first period showing a terrible lack of desire from my players.

“Well I had a big message for them at the interval, I want them playing with desire and pride to ensure that they are producing the form which can keep this proud club in the league structure.

“In our last four games, starting at Annan this coming weekend, I want them working at 100 percent to produce good performances and win games so that when the play-offs arrive (on May 7 and May 14) we are ready to produce what is needed to keep our place in League 2.”

He admitted that the second-half performance against Stirling was much better, and there were opportunities to win the game: “After the break we started to create chances and after creating virtually nothing in the first-half we could have won it.

“We need that sort of desire for the whole 90 minutes, not half a game, and the players know what a proud club like Cowdenbeath deserves from them.”

Penalty taking wing back, Fraser Mullen, collected a booking against Albion which means he will miss two of the last three games but he will be available for the play-offs.

The manager is also expecting wing-back Craig Thomson to be fit for the last couple of league games and the play-offs, while goalkeeper Craig McDowall, who suffered an ankle knock against Stirling, may have to sit out the game at Annan, who are still battling to finish second in the table so it will be a tough game at Galabank for the Blue Brazil.