McDonalds is about to report earnings. Heres what to expect – CNBC 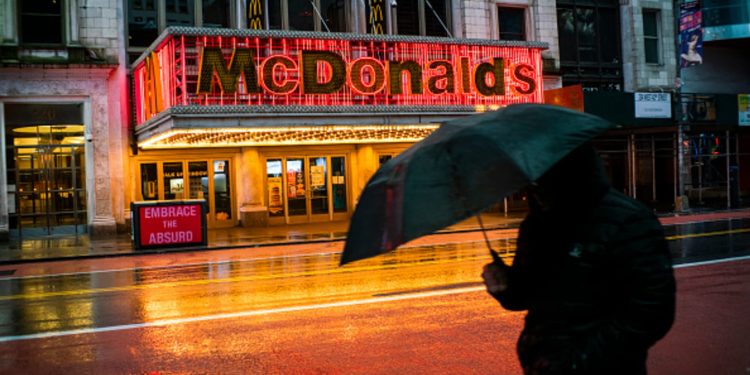 McDonald’s on Thursday reported better-than-expected earnings and revenue, fueled by price hikes in the U.S. and strong international sales growth.

But the war in Ukraine and inflation in the fast-food giant’s home market loomed large over its quarterly report. CEO Chris Kempczinski said that the conflict hasn’t affected consumer behavior across the rest of Europe yet, but some low-income U.S. consumers are shrinking their orders or buying cheaper items.

Shares of the company rose less than 1% in premarket trading.

Here’s what the company reported compared with what Wall Street was expecting, based on a survey of analysts by Refinitiv:

The company spent $27 million to pay for leases, employee wages and supplier costs in Russia and Ukraine after suspending its operations in both of those countries due to the war. McDonald’s reported an additional $100 million charge for inventory in its supply chain that will likely spoil because of the temporary closures of its restaurants in Ukraine and Russia. Altogether, those costs dragged its earnings down by 13 cents per share.

The company also said that it has reserved $500 million, or 67 cents per share, for a potential settlement related to an international tax matter, but it did not share more details.

Excluding costs related to the tax settlement, its restaurants in Ukraine and Russia and other items, McDonald’s earned $2.28 per share, topping the $2.17 per share expected by analysts surveyed by Refinitiv.

Like the broader restaurant industry, McDonald’s has been facing higher commodity and labor costs, leading the company and its franchisees to raise prices. CFO Kevin Ozan said the company expects elevated inflation to continue throughout 2022, given macroeconomic conditions.

Net sales rose 11% to $5.67 billion, beating expectations of $5.59 billion. Global same-store sales climbed 11.8% in the quarter, fueled by strong growth in markets like France and the United Kingdom. Digital system-wide sales surpassed $5 billion in the quarter.

In the United States, same-store sales increased 3.5%, surpassing StreetAccount estimates of 3.3%. The company credited price increases and marketing promotions for growth in its home market. A year ago, the fast-food chain reported U.S. same-store sales growth of 13.6% as it lapped the weak demand of the early pandemic lockdowns.

In the first quarter, McDonald’s U.S. menu prices were up about 8% compared with the year-ago period. Executives said on the company’s conference call that consumers are starting to trade down to cheaper menu items or having smaller orders.

“We are certainly keeping a close watch on lower-end consumers, just to make sure that we’re still providing the right value for our lower-end consumers,” he said. “But one of the things that’s probably helpful right now, as you know, is food at home is has been increasing even more than food away from home.”

In March, prices for food at home were up 10% compared with a year ago, while food away from home had risen just 6.9%, according to the Bureau of Labor Statistics.

Kempczinski said that the overall U.S. consumer is in “good shape.” For example, customers are still ordering their McNuggets and Big Macs for delivery, the most expensive way to buy McDonald’s due to the hefty convenience fees.

McDonald’s international operated markets segment, which includes France, the U.K. and Australia, reported same-store sales growth of 20.4%. The company said the reduction of Covid-19 measures boosted sales in the quarter. Sales in the U.K. also got a lift from the limited-time Chicken Big Mac, which Kempczinski called the market’s most successful food promotion.

Detroit Lions final 7-round mock draft: Detroit loads up on defense early in the draft – Pride Of Detroit