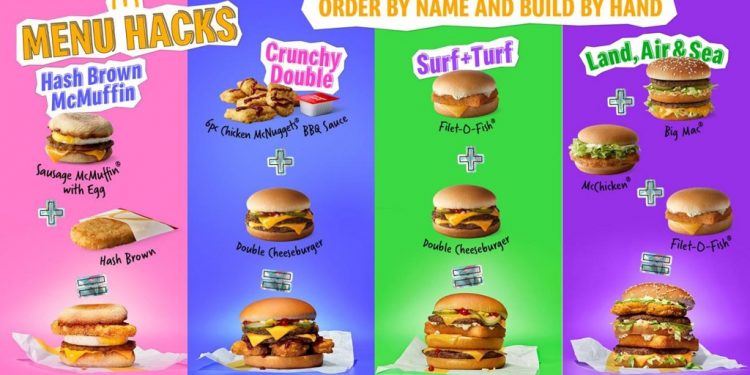 
Not sure what to get at McDonald’s? Just combine a Big Mac, a McChicken and a Filet-o-Fish into a single, giant sandwich.

The fast-food giant is rolling out “menu hacks” where customers can choose from four different combinations of their favorites — and which some weaker stomachs might find intimidating.

Breakfast fans who love their Sausage McMuffin with egg and a hash brown can stack one on top of the other and enjoy a Hash Brown McMuffin, for example.

A double cheeseburger doesn’t have to be eaten with the McNuggets on the side. Instead, the nuggets and barbecue sauce can be stuffed under the bun to create a “Crunchy Double.”

Those with outsize appetites can go big with the “Land, Air, and Sea” — a monster mash-up that puts together a Big Mac, a McChicken sandwich, and a Filet-o-Fish.

The new items will be available for a limited time only beginning on Monday.

McDonald’s said it invited fans to create their own menu hacks and post their concoctions on social media. Sarah Sandlin, a social media influencer, came up with the Hash Brown McMuffin.

“I’ve been saying for years that the Hash Brown goes inside of the Sausage McMuffin with egg…that extra little crispy bite is the real breakfast cheat code,” she said.

“This campaign shows that it has never been ‘our menu’ — the menu belongs to our fans,” said Jennifer Healan, McDonald’s vice president of marketing.

Last week, the Chicago-based company announced that it would expand its pilot roll-out of its McPlant burger — the meatless patty created in conjunction with Beyond Meat.

What started as a trial at eight selection locations has now grown into a promotion in some 600 restaurants in and around San Francisco and Dallas-Fort Worth.

A senior analyst said on Wednesday that he was stunned to see sales of the McPlant surpass his expectations.

FIFA World Cup 2022: Now's Your Chance to Get Tickets