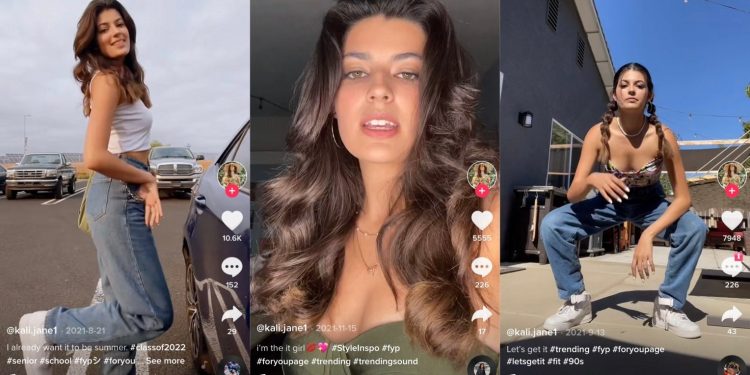 
Last year, a series of Addison Rae spoof videos created by filmmaker Dhar Mann went viral, and a new one has just dropped in 2022.

The sketches are about an influencer called Allison Day who appears to be loosely based on 21-year-old TikTok star and social media personality Addison Rae.

Allison Day isn’t actually a real person, she’s a character played by an American actress called Kali Jane. Let’s get to know the star behind the camera…

Who is Kali Jane?

Kali Jane is an actress, model and influencer who is best known for playing Allison Day in the Dhar Mann Studios’ short films.

She is also a popular TikTok star with over 400,000 followers on her profile @kali.jane1 where she posts trending, dance and lip-sync content.

The 18-year-old from California is part of The Brogan Agency.

As per IMDB, she developed a love for acting when she was just 12 after joining her school’s theatre programme.

She has starred in many stage shows including playing “Belle” in Beauty and the Beast and “Ariel” in The Little Mermaid.

The video instantly went viral on TIkTok as fans noticed that the storyline and lead character’s name closely resembled that of TikTok star Addison Rae who was extremely popular at the time.

It follows the story of a girl called Allison Day who enters a designer fashion store but is not allowed to buy anything until the worker realises how many followers she has.

After the first instalment was so popular, Dhar Mann returned with a second spoof called “TikTok FAMOUS TEEN Kicked Out Of Office, Instantly Regrets It” which aired in April 2021.

He has created a number of other Allison Day films too, the most recent being “Guy USES TIKTOKER For Followers” which was just released in February 2022.

All of the Allison Day videos can be watched on his YouTube channel.

Dhar Mann is the entrepreneur and filmmaker behind the viral Allison Day videos.

The 37-year-old launched his first business, a real estate mortgage brokerage, at just 19-years-old whilst studying at the University of California.

He expanded the company to include property management, started a beauty subscription business called LiveGlam and then launced his social media content creation firm Dhar Mann Studios in 2018.

The company produces viral short films that depict real-life situations, his most popular one being the Allison Day spoof.