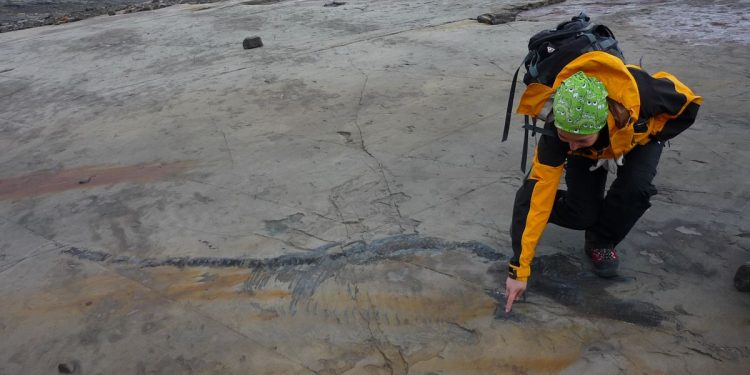 In the shadow of a massive Patagonian glacier, paleontologists have unearthed a rare fossil find: an ancient marine reptile that died while pregnant. This dolphin-like creature, called an ichthyosaur, is the first of its kind to be discovered in Chile, where it was retrieved from a dig site near the Tyndall Glacier in the Southern Patagonian Ice Field.

“This site is really unique, because it’s capturing a time period in Earth’s history where we don’t have a very good fossil record for marine reptiles,” Erin Maxwell, an ichthyosaur specialist and curator of marine reptiles at the State Museum of Natural History in Stuttgart, Germany who helped excavate the fossil, told Live Science.

Ichthyosaurs (which translates to “fish lizards”) dominated the seas beginning in  the early Triassic period, about 251 million years ago, and they lived concurrently with dinosaurs until about 95 million years ago, according to the University of California Berkeley. These formidable marine reptiles mostly ate ancient, hard-shelled squid relatives, as well as some types of fish and smaller ichthyosaurs. The smallest ichthyosaur species grew to measure around 1.3 feet (0.4 meters) long, while the largest reached nearly 69 feet (21 meters) from snout to tail, according to National Geographic.

At 13 feet (4 meters) long, the Tyndall ichthyosaur is a medium-sized specimen that dates to around 129 to 139 million years ago, in the early part of the Cretaceous period (about 145 million to 66 million years ago).

The fossil came to Maxwell’s attention when it was first found in 2009 by paleontologist Judith Pardo-Pérez, who joined Maxwell’s research group in Stuttgart shortly after the fossil’s discovery. Pardo-Pérez — now a researcher at the GAIA Antarctic Research Center at the University of Magallanes (UMAG) in Punta Arenas, Chile — and her colleagues who found the ichthyosaur specimen dubbed it “Fiona” after actress Cameron Diaz’s ogre character in the movie  “Shrek” (Dreamworks, 2001), because the fossil’s preservative oxide coating turned it green, like its plucky ogre namesake.

But it took 13 years for scientists to finally excavate and study Fiona’s remains, which Maxwell said isn’t uncommon.

“There is often a very large lag between discovery of the fossil and study of the fossil,” Maxwell explained In this case, the delay was partly due to location: the Tyndall Glacier is extremely remote, and so every fossil from the site — including 23 other ichthyosaurs that were discovered alongside Fiona — had to be carefully airlifted out by helicopter after excavation. Sadly, many more fossils were left behind. “We have almost a hundred ichthyosaurs in the Tyndall Glacier fossil deposit and many of them, unfortunately, will never be excavated, due to the difficulty of access, being in risk areas (cliff edge), and lack of funds,” Pardo-Pérez said in a statement.

Specimens like Fiona, which fossilized during pregnancy, are especially useful for paleontologists because they offer a glimpse of multiple stages in the life cycle of that species. “We can tell, for instance, how many embryos those species might have had, and how large they were at birth,” Maxwell said. The first known pregnant ichthyosaur fossil, discovered in 1749 and scientifically described in 1842, confirmed that ichthyosaurs produce live young rather than laying eggs like most modern reptiles do, she added.

Maxwell hopes that the find will help drum up enthusiasm for South American paleontology, which has historically been overlooked in favor of North American, Russian, Chinese, and Western European sites. “We really only have a picture of what’s going on in half the globe for the Mesozoic [252 million to 66 million years ago],” she said. “So these finds are very, very important to help bring a global perspective to our understanding of Cretaceous oceans.”