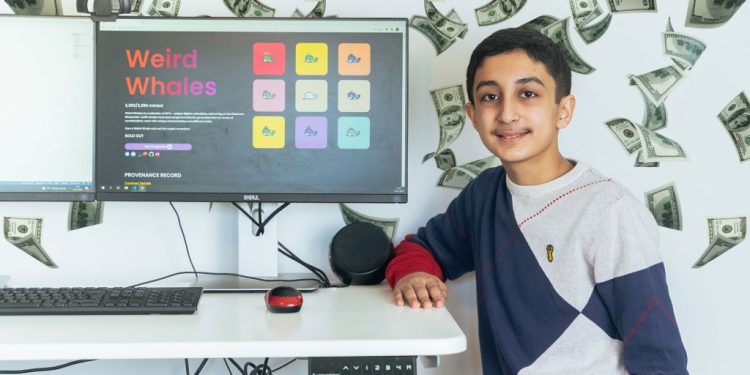 
He’s only 12, but this boy from London is already a self-made millionaire.

All from creating online avatars — when he’s not busy doing math homework.

Benyamin Ahmed, an eighth grader with a knack for coming up with original images known as NFTs, has turned his skill into a massive crypto wallet worth about $1 million. And he did it in less than a year.

These NFTs — short for non-fungible tokens — are cartoonish, digitally copyrighted avatars, which are in high demand among the bitcoin and metaverse set. Some of Ahmed’s “Weird Whales” have sold for $20,000.

“I decided on a whale because someone who owns 1,000 bitcoins is called a whale,” Ahmed told The Post.

He learned about NFTs when a friend of his father, who is a programmer for the London stock exchange, bought a Rare Pepe image for $27,000.

“It sounded ridiculously expensive at the time, but my dad’s friend sold his NFT just a few months later for half a million dollars,” Ahmed said, “I became fascinated that someone was willing to pay this much for a jpeg!”

And that kind of windfall was not unusual. The best known NFTs are from the CryptoPunks collection, with some avatars going for millions. In 2021, NFT sales totaled $25 billion.

So the plucky tween, who learned the basics of coding when he was just five, taught himself how to use Open Sea, the largest online NFT marketplace, and how to generate his own profile pictures. He released “Weird Whales” in June of 2021.

After his launch, Ahmed posted a Twitter thread about creating his whales. His posts went viral and he became something of a celebrity in the NFT universe. He’s now collaborating on other collections with designers who have worked for Marvel and Disney.

To date, the collections he’s worked on have traded at a staggering $15 million, he says. He’s personally pocketed about $1 million, all of which he keeps in cryptocurrency. He hasn’t converted a penny and doesn’t even have a traditional bank account. He’s bought nothing from his windfall.

“There’s a risk that it could all go to zero, but I don’t need the money yet,” he said. “I’m confident that [crypto] prices will increase a lot more from here.”

The 8th grader, who enjoys swimming and taekwondo when he’s not fattening his crypto wallet, initially wanted to keep quiet about his staggering success. But when his story began to make headlines, friends and family found out and began congratulating him in droves.

His grandparents are especially proud of his successes.

“My grandad is really ill at the moment, so it was heartwarming to see him follow all the coverage with pride,” Ahmed said.

“It’s not the money but the moments like this that bring me the most happiness.”